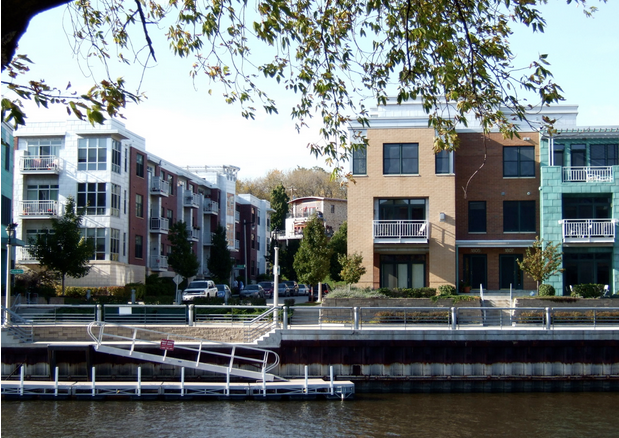 Milwaukee once had a host of beer plants, including Schlitz, Pabst and Blatz, along the Milwaukee River to which hops, malt and other ingredients were shipped in and beer was shipped out by train. The beer factories closed, the Beer Line shut down and the tracks were removed. Mayor John Norquist was faced with the equivalent of what Rhode Island governor Raimondo now faces in Providence – where Route 195 was relocated by earlier governors, leaving her a large swath of empty land for Raimondo to develop.

Yesterday I ran a post linking to an essay by Union Studio architect Joel VanderWeele explaining why. Norquist, who was Milwaukee’s mayor from 1988 to 2004 and then led the Congress of the New Urbanism for a decade, commented. He affirmed VanderWeele’s analysis with a brief account of his Beer Line experience. He writes:

Joel VanderWeele’s essay is spot on. Milwaukee’s experience supports Joel’s viewpoint. In 1998, the 28 acre rail yard serving the defunct Schlitz brewery was ready for redevelopment. With help from the EPA the yard was clean and the city owned the land attractively located along the Milwaukee River. We hired Dan Solomon, a founder of the Congress for the New Urbanism, to design a plan and code the land. He suggested a dense network of streets with small blocks. He favored small parcels (no super blocks) and further suggested dividing the 28 acres into six districts.

These six districts were each sold at a discounted price to developers who won a design competition. The jurors for the competition were chosen by me, but I deferred to City Planner Peter Park and Solomon. They, of course, favored plans that conformed to Solomon’s very urban coding. The plan required apartments and townhouses. Some parcels were sold (fee simple) to individual property owners on the open market.

The project has been spectacularly successful. Some $40 million in base land value is now worth over $700 million. Counting adjacent development the Beer Line district includes well over a $1 billion in development. The entire 28 acres was built out in less than five years with no developer subsidy other than a modest discount in the price of land. Amenities include a public river walk, a privately financed rowing club which houses university and high school crews and a marsupial walk/bike bridge. There’s even a brewery again: http://www.lakefrontbrewery.com

Providence and Rhode Island can maximize value by heeding VanderWeele’s advice. In fact he should be hired to manage the project.

The photo atop this post was the most congenial I could find from the new Beerline neighborhood, much of which is modernist in style. If I had been mayor, I would have encouraged more traditional architecture.

But even at the CNU they are debating whether to let modernists build projects under the New Urbanist banner. I believe this only serves to undermine the CNU brand. The CNU upholds many valuable urbanist principles, but there is little doubt that it is the tendency of N.U. projects to look like neighborhoods built before WWII that has caused them to be vastly popular. That popularity has played a significant role in replacing modernist planning principles with N.U. principles at the state and municipal level across the country. The CNU should not toy with that success.

In fact, the CNU Charter actually upholds the proposition that Milwaukee would have been better off had the Beerline neighborhood been built with its historic setting more evidently in mind. Likewise, as Joel VanderWeele attests, the Route 195 project is going to be harder if its architecture does not win the hearts and minds of citizens who will pay for the subsidies that will probably help bring it about, whether parcels are large or small.

This blog was begun in 2009 as a feature of the Providence Journal, where I was on the editorial board and wrote a weekly column of architecture criticism for three decades. Architecture Here and There fights the style wars for classical architecture and against modern architecture, no holds barred. History Press asked me to write and in August 2017 published my first book, "Lost Providence." I am now writing my second book. My freelance writing on architecture and other topics addresses issues of design and culture locally and globally. I am a member of the board of the New England chapter of the Institute of Classical Architecture & Art, which bestowed an Arthur Ross Award on me in 2002. I work from Providence, R.I., where I live with my wife Victoria, my son Billy and our cat Gato. If you would like to employ my writing and editing to improve your work, please email me at my consultancy, dbrussat@gmail.com, or call 401.351.0457. Testimonial: "Your work is so wonderful - you now enter my mind and write what I would have written." - Nikos Salingaros, mathematician at the University of Texas, architectural theorist and author of many books.
View all posts by David Brussat →
This entry was posted in Urbanism and planning and tagged 195 Redevelopment District Commission, Beer Line, Beerline, CNU, Congress for the New Urbanism, Joel VanderWeele, John Norquist, Milwaukee, Providence, Rhode Island, Union Studio. Bookmark the permalink.