This page advises readers of developments in the existence of Lost Providence. It will also collect an archive of photographs that add to the collection already in the book but which were either nudged out by the vicissitudes of space in a book, or came to my attention too late to be included in the book. This page will also collect readers’ own favorite lost buildings that did not appear in the book. The photograph at left is a good example of one that is of interest but did not make it in. It illustrates how the Darth Vader Building (right) blocks the view corridor to the State House from downriver. You can see that the corridor has become a slit through which the Independent Man atop the dome of the capitol can just barely be seen from the Crawford Street Bridge. The building at left is the old Hospital Trust, now the RISD library and graduate suites upstairs.

I hope readers will return to this page and contribute to its dialogue.

The latest entries on the page will be at the end. That seems kind of silly, but this is a blog page, not a blog post. I will revise it soon if I can figure that out.

This table of contents will be continually updated:

Here is the latest update of events planned for Lost Providence. I have been removing events as they occur, and I have been pleasantly surprised at the number of events that have popped up since the dozen or so original events took place. Beyond those below, more events may still be added to the calendar.

Links to sites where book may purchased online can be found by typing “Lost Providence David Brussat” into Google. History Press is headquartered in Charleston, S.C., and is a division of Arcadia Publishing. Below are some of the primary sites for the book’s acquisition:

2. Images not in the book

The first set of illustrations here are the lost buildings in Chapter 11, “Lost But Not Listed.” Other images not in that chapter or the book will follow.

Sabin Tavern (1763-1891) – You can see the Gaspee Room, where Providence patriots met to plan the sinking of the British revenue cutter H.M.S. Gaspee in 1773, in an addition to the Mary Arnold Talbot House at 209 Williams St.

State Arsenal (?-?). The first of the two illustrations above is the only representation of the state arsenal I was able to locate until the second was sent to me by Christopher Martin, editor of the Quahog.com blog. I don’t know when the arsenal in the drawing was built, or exactly how it had been expanded as a mill by the time the postcard was printed, but it was attacked at the outset of the Dorr Rebellion on May 18, 1842. During the rebellion Rhode Island had two sitting governors and legislative bodies. That lasted for about six weeks until the revolt dissolved after the “battle” of Acote’s Hill. The Cranston Street Armory (1907) sits today on the same site once occupied by the arsenal attacked in 1842.

State Prison (1838-1878) on the northwest edge of the Cove Basin held the convicted rebel leader Thomas Wilson Dorr until his release after several years’ imprisonment and convicted murderer John Gordon until he was hanged in 1845, the last prisoner executed in Rhode Island to this date. His conviction was and remains controversial. The prison was closed when what the Adult Correctional Institutes opened in 1878. (PPL)

Washington Buildings (1843-1916), designed by James Bucklin, faced east from the west side of the Providence River, between Westminster and Fulton streets. (PPL)

State Normal School (1843-1956), on Benefit Street, was the city’s first high school and served several other uses until it was demolished and turned into RISD beach. (PPL)

Providence Opera House (1871-1931), next to the Narragansett Hotel, was the city’s primary theatrical house for half a century. (PPL)

Same building with the addition of the sixth story in 1915. (PPL)

Infantry Hall (1880-1942) was an assembly hall erected by Rhode Island’s First Light Infantry Regiment, and hosted dances and lectures. It burned down in 1942. (PPL) 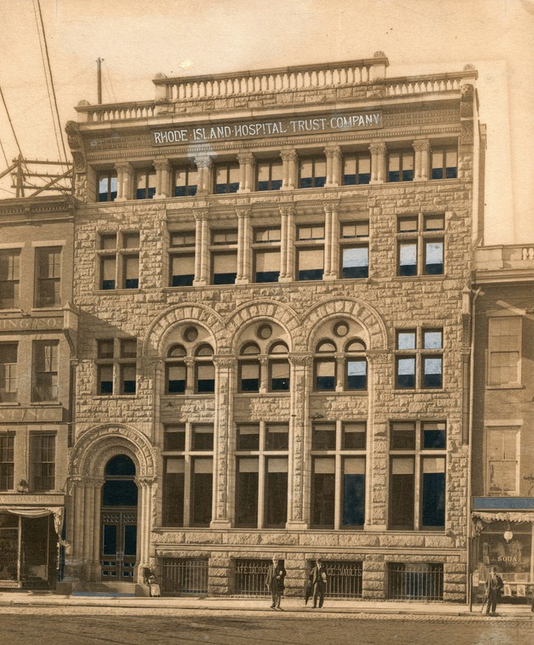 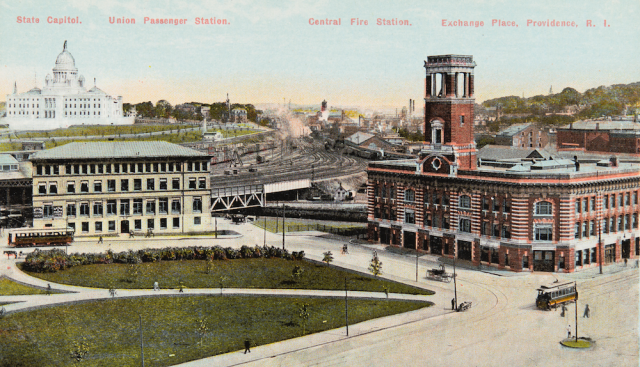 Central Fire Station (1903-1938), at right, was torn down when the Fire Department moved to the 1940 police-fire headquarters. The site today holds the Pastore post office annex. The 1940 headquarters was demolished in 2008, and the departments moved into a goofy headquarters building just across Route 95 at Washington Street. (PPL) 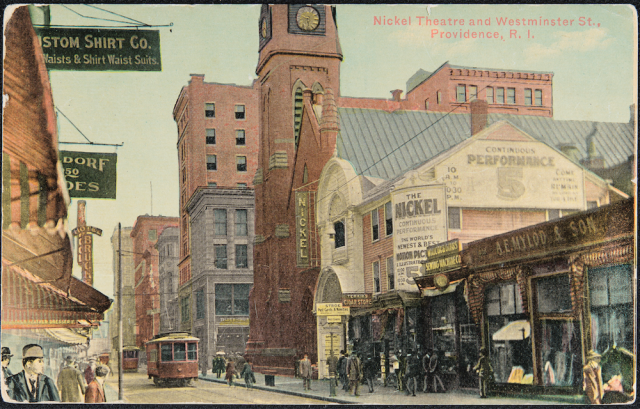 Nickel Theater (1906-1919), on Westminster Street next to Grace Church, was succeeded by the Albee, which was demolished to create a parking lot for the Grace, which was damaged during the operation. A parsonage or “pavilion” is now being built on the parking lot.  (PPL) 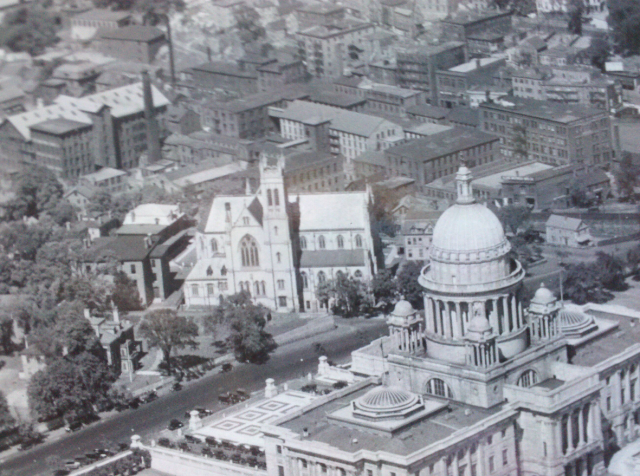 St. Patrick’s Roman Catholic Church (1916-79), across Smith Street from the State House, rose next to what is now state offices, once the Registry, and was demolished to create parking for state employees. (City Archives) 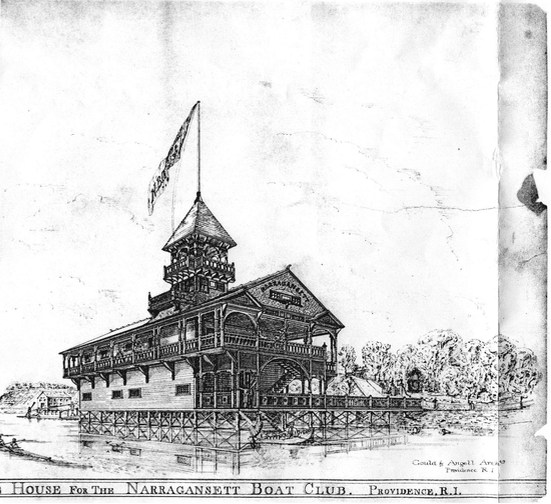 Robert Solomon nominates another boathouse, that of the Rhode Island Yacht Club, at Pawtuxet – not exactly a lost Providence building, but worthy of notice anyhow:

Readers may comment on the book by sending an email to the author at dbrussat@gmail.com.