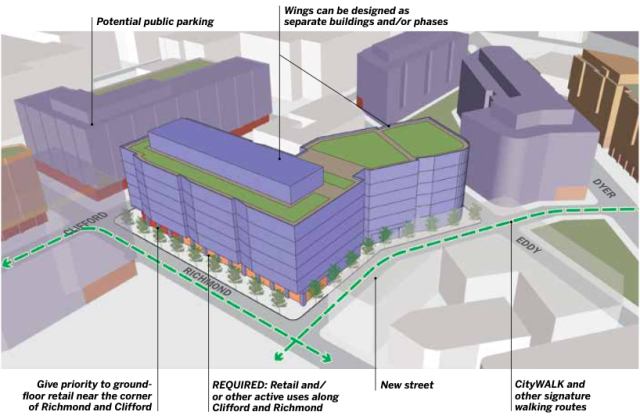 From I-195 corridor guidelines for Parcel 25. (Tool Kit for Developers)

Joel VanderWeele, an architect at Union Studio in downtown Providence, has posted an excellent essay – “The I-195 Land: Subdivide & Conquer” – on the firm’s “unofficial blog.” It is about the development of the vacated Route 195 land on the edge of the city’s central business district. He argues that dividing the land up into large parcels is asking for trouble, and that difficulties for developers and the city are baked into a process of that sort. He argues that development would be both faster and better (and I would add less costly) if the large parcels are subdivided so that they were affordable to a wider range of potential entrepreneurs, including local people. He also argues that subdivision would be reversible case by case if need be.

Although he focuses mostly on process issues facing the development of large parcels, VanderWeele’s description of why the streetscapes that result would inevitably be tedious is devastating.

Even if the commission did manage to attract the big time developers (which they’re struggling to do) and have them all succeed (which is unlikely), the results would be ugly.  Literally ugly.  Ugly and boring.  Architecturally speaking, buildings that take up entire city blocks are difficult to design well, especially when you’re on a tight budget.  I take the highly detailed design scenarios developed by the commission as an implicit acknowledgement of this difficulty.  When every side of the building is essentially a “front,” the budget for the exterior is stretched pretty thin, usually resulting in a boring building with at least one “front” that looks very much like a back.  By contrast, look at nearly every building on Westminster, or any commercial street built before 1950, for that matter.   Thanks to party walls and alleyways, the exterior budget could be focused on one or two sides of the building, resulting in dignified buildings that contribute to the beauty of the city.

The cobrahead lampposts that now besmirch the 195 corridor suggest how low official expectations are, and these expectations are clearly evident, too, in the several design proposals already accepted by the 1-195 Redevelopment District Commission. Low standards are spelled out in the commission’s Tool Kit for Developers. Fortunately, there is plenty of time to correct all of this, and if Governor Raimondo wants the public to back the commission’s efforts, she should see to it with all deliberate speed.

Phil Bess, who alerted me to Joel’s essay, held a charrette about the 195 land and also about the 6-10 connector issue over this past week. I will report on the charrette results as soon as I can.

This blog was begun in 2009 as a feature of the Providence Journal, where I was on the editorial board and wrote a weekly column of architecture criticism for three decades. Architecture Here and There fights the style wars for classical architecture and against modern architecture, no holds barred. History Press asked me to write and in August 2017 published my first book, "Lost Providence." I am now writing my second book. My freelance writing on architecture and other topics addresses issues of design and culture locally and globally. I am a member of the board of the New England chapter of the Institute of Classical Architecture & Art, which bestowed an Arthur Ross Award on me in 2002. I work from Providence, R.I., where I live with my wife Victoria, my son Billy and our cat Gato. If you would like to employ my writing and editing to improve your work, please email me at my consultancy, dbrussat@gmail.com, or call 401.351.0457. Testimonial: "Your work is so wonderful - you now enter my mind and write what I would have written." - Nikos Salingaros, mathematician at the University of Texas, architectural theorist and author of many books.
View all posts by David Brussat →
This entry was posted in Architecture, Providence, Urbanism and planning and tagged 195 Redevelopment District Commission, Development, Joel VanderWeele, Notre Dame, Philip Bess, Providence RI, Union Studio. Bookmark the permalink.