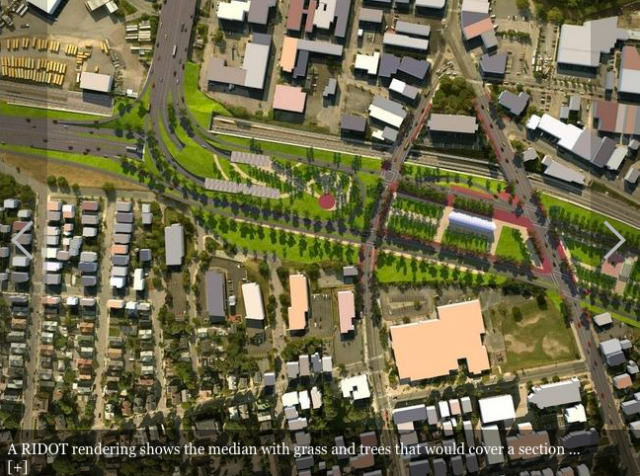 Tunnel entrance visible at left of plan to renovate the Route 6-10 connector. (RIDOT)

My impression of the proposed 6-10 connector alternative to rebuilding the aging highway was to replace the highway with a surface boulevard – a concept I cheered last December in “A boulevard, not a highway.” Imagine my surprise reading in today’s Journal that the “boulevard” concept had morphed into the Biggest Little Dig.

Boston’s Big Dig replaced its elevated I-93 with a tunnel covered by the Rose Kennedy Greenway. Whatever we think of it now, it is famous for its cost overruns. I have the same pit in my gut at today’s Providence Journal’s story, “Green Gateway,” by John Hill, which describes the new plan to “entomb Route 10 in concrete walls with a roof covered in dirt over the roadway to create a park-like median from Route 6 to Broadway.”

Huh? Whatever happened to replacing the highway with a boulevard? Perhaps that concept was never feasible. Perhaps you could never get the amount of traffic on the connector through a boulevard worthy of the public’s support. And now they’re saying it will cost upwards of $800 million in state and federal funds. This apparently does not include money to be spent on other road and bridge repairs on the state’s to-do list. The 6-10 revamp is expected to take up a tenth of RIDOT’s RhodeWorks bridge and road repair program (excluding the cost of the truck-tax infrastructure). Already, the speed of this bracket creep is breathtaking.

The bus rapid transit (BRT) part of the program sounds nice but why put the bus lanes in the middle, requiring expansive bridge gantries to enable riders to get to buses?

Given the broader and deeper overlapping budget quagmires engulfing the city and state (not to mention the feds), why not build a simpler boulevard? Why not build a boulevard with two sets of three lanes in both directions flanked by two sets of two lanes on either side? Can the tunnel deck park. A wide verdant median could separate the two sets of three fast lanes in the middle, with narrower verdant medians separating the flanking slower service roads on either side of the main drag.

This is the traditional design of a boulevard. Regular buses and bikeways would go up and down the service lanes and the BRT could go up the middle, with pull-overs that would negate the need for costly rider flyovers. (Recent news of scant ridership on the southern R.I. segments of MBTA might raise some eyebrows about BRT.) The money saved by a more basic design could be invested in elegant landscaping and street furniture throughout the route, reknitting long-severed neighborhoods and creating allure for new development on either side. Thus conceived, the idea could be expanded farther along Routes 6 and 10 rather than concentrating so much of the renovation on the connector segment itself.

I’m sure there must be some hitch to this simple plan, or the authorities would have embraced it themselves, right?

This blog was begun in 2009 as a feature of the Providence Journal, where I was on the editorial board and wrote a weekly column of architecture criticism for three decades. Architecture Here and There fights the style wars for classical architecture and against modern architecture, no holds barred. History Press asked me to write and in August 2017 published my first book, "Lost Providence." I am now writing my second book. My freelance writing on architecture and other topics addresses issues of design and culture locally and globally. I am a member of the board of the New England chapter of the Institute of Classical Architecture & Art, which bestowed an Arthur Ross Award on me in 2002. I work from Providence, R.I., where I live with my wife Victoria, my son Billy and our cat Gato. If you would like to employ my writing and editing to improve your work, please email me at my consultancy, dbrussat@gmail.com, or call 401.351.0457. Testimonial: "Your work is so wonderful - you now enter my mind and write what I would have written." - Nikos Salingaros, mathematician at the University of Texas, architectural theorist and author of many books.
View all posts by David Brussat →
This entry was posted in Architecture, Development, Landscape Architecture, Providence, Rhode Island, Urbanism and planning and tagged 6-10 Connector, Big Dig, Boston, Providence RI, Rhode Island, Rhode Island Department of Transportation, RIDOT. Bookmark the permalink.