While the contagion of “global architecture” today dilutes the individual character of our cities, turning them into bland collections of interchangeable buildings, we now have voices offering a fresh choice: classical architecture based on local traditions and ideals. 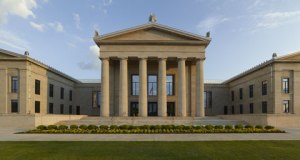 Courthouse in Tuscaloosa, Ala. (HBRA Architects)

With the above passage extracted by way of introduction, Kristen Richards has kindly sent me a wonderful piece from her vital daily ArchNewsNow.com compendium of international architectural news and opinion. “American Architecture’s Classical Revival” is by architect Allan Greenberg, the noted American classicist, and his associate, Colette Arredondo, a graduate of the school of architecture at Notre Dame. The essay is published in City Journal, the quarterly of the Manhattan institute. Greenberg basically recapitulates everything I’ve been saying in my old newspaper column and more recent blog for a quarter of a century.

Bravo for Greenberg! I met him briefly in 2011 when he visited Boston to lecture before a gathering hosted by the New England chapter of the Institute of Classical Architecture & Art. I wrote what some considered an unjustly withering report of Greenberg’s talk. He had spent most of the lecture expressing admiration for Ludwig Mies van der Rohe and describing (rather obscurely, I thought) what classicists could learn from modernists. … Not exactly preaching to the choir!

City Journal is considered something of a conservative publication, and modernism was the design template for the optimistic progressivism of postwar America. But today, seeing what Greenberg and everybody else around the world is able to see, if they want to look, it is clear that modernism was a big mistake. Dumping it and embracing the classical tradition in design is an outlook at least as congenial to liberals as to conservatives.

Although some architecture critics have been straining to paint the classical revival as a conservative project, it is properly seen as nonpartisan.

For one thing, most liberals today would blanch at having been responsible for producing the design template for modern capitalism. We must all live with the blowback from Mad Men! And most conservatives already blanch at the turn that modern capitalism has taken of late, favoring Wall Street so strenuously over Main Street and getting into bed with Big Government. Conservatives don’t tend to care all that much about the income gap, except now that executive salaries are gnawing on the bone of productivity.

Whatever happened to the free market? It’s been kidnapped by pirates – who are headquartered in alien spaceships and working to fray the social contract that held this country together for so long. If men from Mars had brought us modern architecture, we’d have considered it an attack on our planet. And indeed, since conquering America the alien spaceships have gone on to spread a sinister cultural imperialism, destroying cities around the globe with no less fervor than they’ve destroyed cities here.

I don’t know whether Greenberg or others buy into this portrayal of the intersection between design and society here and globally. He seems to regret that modernism is vacuuming up the character from our culture. The classical revival that he touts in City Journal offers a potential way out, one that emphasizes politics at the local level – and grassroots opposition to politicians who allow developers to hire modernist architects to rip apart the fabric of our cities and towns.

What’s that great sucking sound? No, it’s not Ross Perot, it’s modernism sucking the character out of our built environment.

It is time to level the playing field between modernist and traditional architecture in the process of handing out major commissions for local development, public and private. The picture Greenberg paints of the classical revival, while certainly accurate, leaves readers with the impression that it’s a project just getting under way. In fact, it has been pushing the envelope for decades. The number of traditionally styled projects is growing – slowly, to be sure – but more and more people are learning the arts and crafts required to assemble an architecture of beauty, and as the pressure for their work grows, architecture schools will have no choice but to attend to the needs of the market.

The four buildings Greenberg describes, by Thomas Beebe, Duncan Stroik, James McCrery and Peter Pennoyer, are all superior in design to the traditional work by various architects in the shot of Providence atop this post, taken from the balcony of the Governor’s Room in the Charles Follen McKim-designed State House. But it does illustrate of one of the prime merits of traditional design – individual works do not need to be brilliant in order to form a collection of buildings that qualifies as highly attractive.

The skunk in this garden party here in Providence is the modernist GTECH building, poking its snout in from the left. The pre-GTECH photo below, by Richard Benjamin, shows another angle of the scene not just injured but largely destroyed by GTECH. It did not have to end this way, and it can be turned around in the future, here, throughout the U.S. and around the world. 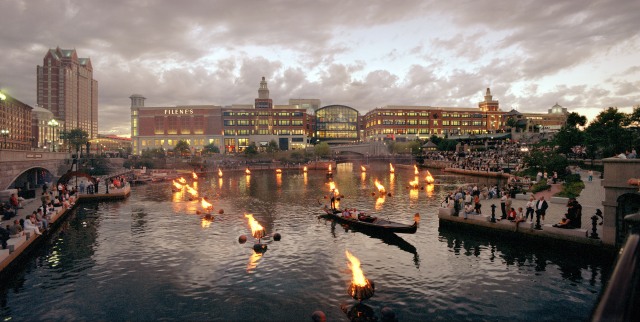 Waterplace at dusk on a WaterFire night, in the year 2000. Six years after this photograph was taken, the GTECH building was completed, and now  the center of this view, largely wrecking it. (Photo by Richard Benjamin, RichardBenjamin.com)

This blog was begun in 2009 as a feature of the Providence Journal, where I was on the editorial board and wrote a weekly column of architecture criticism for three decades. Architecture Here and There fights the style wars for classical architecture and against modern architecture, no holds barred. History Press asked me to write and in August 2017 published my first book, "Lost Providence." I am now writing my second book. My freelance writing on architecture and other topics addresses issues of design and culture locally and globally. I am a member of the board of the New England chapter of the Institute of Classical Architecture & Art, which bestowed an Arthur Ross Award on me in 2002. I work from Providence, R.I., where I live with my wife Victoria, my son Billy and our cat Gato. If you would like to employ my writing and editing to improve your work, please email me at my consultancy, dbrussat@gmail.com, or call 401.351.0457. Testimonial: "Your work is so wonderful - you now enter my mind and write what I would have written." - Nikos Salingaros, mathematician at the University of Texas, architectural theorist and author of many books.
View all posts by David Brussat →
This entry was posted in Architects, Architecture, Architecture Education, Development, Providence, Urbanism and planning and tagged Allan Greenberg, City Journal, Classical Revival, Duncan Stroik, James McCrery, Manhattan Institute, Peter Pennoyer, Politics, Providence, Richard Benjamin, Thomas Beebe. Bookmark the permalink.