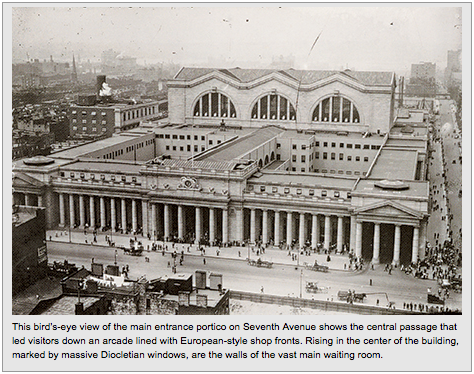 Traditional Building has published an important essay, “Rebuilding McKim’s Penn Station,” by the magazine’s eminence gris, Clem Labine, announcing a major plan to reverse one of America’s most egregious civic mistakes. The plan, by architect Richard Cameron, of Atelier & Co., in Brooklyn, would reconstruct Pennsylvania Station according the design of Charles Follen McKim, based on voluminous documentation of the original building, completed in 1910 and demolished in 1963. The article begins:

[The] visionary new plan not only rectifies an appalling act of architectural vandalism, but also radically improves passenger circulation at a critical transit hub, and creates badly needed civic space in a dreary part of New York City.

At an estimated $2.5 billion, the Cameron Plan would be far less expensive than the newly completed PATH transit hub at the World Trade Center, by Spanish starchitect Santiago Calatrava, and do far more. Calatrava’s facility cost $4 billion and serves 50,000 passengers a day, compared with the 560,000 that a new Penn Station would serve.

Some might wonder how a project as ambitious as that can be built. Labine writes:

Cameron makes a convincing case that rebuilding McKim’s Penn Station is both technically and economically feasible. For starters, architectural design development costs would be dramatically less than for a “blank slate” Modernist exercise in abstract geometry that is the current fashion. Archives at the New York Historical Society contain 353 original McKim Mead & White drawings of Penn Station that can be digitized and used to jump-start the design process. Unlike so many of today’s new sculpture-buildings, there would be no complex engineering issues to be resolved because the building is based on time-tested principles. Additional construction savings would be realized since the original excavations and foundations are already in place.

The project would also save by taking advantage of advanced material, fabrication and construction techniques unavailable in McKim’s time. Cameron adds that much of the $2.5 billion could be “covered by air-rights transfers and municipal bond sales.”

The plan also envisions vast new commercial opportunities inside and outside of the rebuilt station, which Cameron sees as “the centerpiece of a spectacular City Beautiful project” originally conceived by McKim, who died before it could be realized. Today that district is dismal indeed. “‘The time is right,’ Cameron declares, ‘to complete McKim’s glorious urban vision.'” This vision, in Cameron’s splendid rendition, would include a plaza north of the Penn comparable to Rome’s Piazza Navona.

The success of the High Line Park on Manhattan’s west side – with its subsequent spectacular increase in real estate values – has demonstrated how beautiful public spaces can trigger economic development. And the High Line Park has virtually no convenient public transit access as compared with the vast transportation network at the Penn Station transit hub.

A couple of years ago, New York’s Municipal Art Society hosted a ridiculous dog-and-pony show in which a few modernist proposals to replace today’s Penn Station strutted their stuff. They were uniformly unimaginative, unrealistic and uninteresting.That they were gathered under the auspices of the MAS shows how far that once great civic institution has fallen, along with so many others – including such former venerables as the New York Landmark Commission, which a few years ago had to be dragged kicking and screaming to approve a beautiful new Beaux Arts building on Park Avenue for Ralph Lauren.

Any new Penn Station would join a proposal by Amtrak to move its services down to the tracks and under the neighboring Farley Post Office (1912), also by McKim Mead & White. It would be renamed for the late U.S. Sen. Patrick Moynihan, an ardent advocate of trains. The massive colonnaded building would be restored to handle Amtrak’s 40,000 daily passengers at today’s dank, discombobulating station. But that plan would strand more than 500,000 passengers of the Long Island Rail Road and New Jersey Transit who use the existing facility. A new Penn Station would bring those passengers needed relief, and would fit into the infrastructure of the Moynihan plan. Incentives to relocate today’s ugly topper, Madison Square Garden, would also need to be enacted by the city.

Clem Labine closes his essay by referring to our civic duty:

We owe it to future generations to fill the hole in the physical and spiritual fabric of the city created by the barbaric acts of 1963. The plans are in place; all that’s needed is political will.

It should not be difficult, let alone impossible, to get this done once the public in New York and around the country comes to realize it can be done. If it can be done it should be done. To finally dismiss Vincent Scully’s famous aphorism – “One entered the city like a god. One scuttles in now like a rat” – would be a major step toward returning the nation to the path of greatness. As Winston Churchill said: “We shape our buildings; thereafter they shape us.” This applies majestically to Richard Cameron’s extraordinarily bold plan to rebuild Pennsylvania Station.

This year is the 100th anniversary of the birth of the late Henry Hope Reed, whose life’s work was to revive the classical architecture that did much to make America a great place. To begin a great project like this would be a great memorial to his memory. 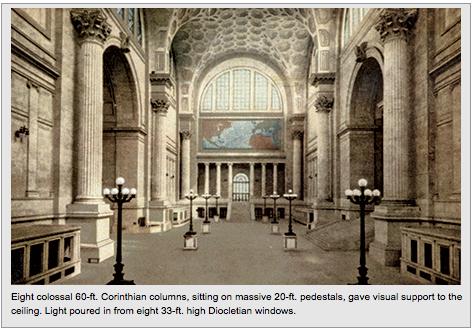 This blog was begun in 2009 as a feature of the Providence Journal, where I was on the editorial board and wrote a weekly column of architecture criticism for three decades. Architecture Here and There fights the style wars for classical architecture and against modern architecture, no holds barred. History Press asked me to write and in August 2017 published my first book, "Lost Providence." I am now writing my second book. My freelance writing on architecture and other topics addresses issues of design and culture locally and globally. I am a member of the board of the New England chapter of the Institute of Classical Architecture & Art, which bestowed an Arthur Ross Award on me in 2002. I work from Providence, R.I., where I live with my wife Victoria, my son Billy and our cat Gato. If you would like to employ my writing and editing to improve your work, please email me at my consultancy, dbrussat@gmail.com, or call 401.351.0457. Testimonial: "Your work is so wonderful - you now enter my mind and write what I would have written." - Nikos Salingaros, mathematician at the University of Texas, architectural theorist and author of many books.
View all posts by David Brussat →
This entry was posted in Architecture, Architecture History, Art and design, Development, Preservation and tagged Clem Labine, High Line, Moynihan Station, Municipal Art Society, New York City, Penn Station, Pennsylvania Station, Richard Cameron, Traditional Building. Bookmark the permalink.