He does not mention rebuilding Pennsylvania Station, built in 1910 and demolished in 1963, as originally designed by McKim Mead & White. Apparently, the idea of extending Penn Station into the old Post Office building (also by MMW) originally also included moving the arena there. (The famous motto “Neither snow nor rain,” etc., is emblazoned above the colonnade.) Since relocating Madison Square Garden has bedeviled every plan thus far, the idea of moving the arena across the street into Farley is the linchpin of a Beautiful Idea masquerading as a Grand Compromise.

Architect Richard Cameron has proposed a realistic plan to rebuild Penn Station, which I’ve reported on extensively, including my post “Rebuild McKim’s Penn Station.” It should take center court in any new plan.

Kimmelman understands that extending Penn into Farley cannot square the circle, and realizes that the current plans for a Moynihan Station seem to grow increasingly tedious. One critic of the latest idea, announced this week by Governor Cuomo, is quoted by David Dunlop in his Times story “Penn Station’s 5th Redesign Fails to Charm Some Critics.” The critic shrugs: “From ‘Wow!’ to ‘Meh’ in five easy steps.” Except that I’d certainly challenge the initial “Wow.” All five designs have dashed ice water – in the form of modern architecture – on the excitement generated by the original proposal to merge Penn with Farley.

Little plans, as Daniel Burnham said, “have no magic to stir men’s blood.” So far no plan, however big, to correct the error erected atop the grave of the original Penn Station has striven to reach for grandeur. The only way to recast the idea in a manner that will stir the blood of New Yorkers – who keep getting slapped upside the head by development – is to restore the original Pennsylvania Station.

That Kimmelman makes no mention of the obvious solution to this Big Apple Rubik’s Cube may be laid to his leading role in the architectural establishment. But his article reveals that it can be done. Yet it can happen only if New Yorkers oust the tiny experts – including their governor – who claim to speak on their behalf. 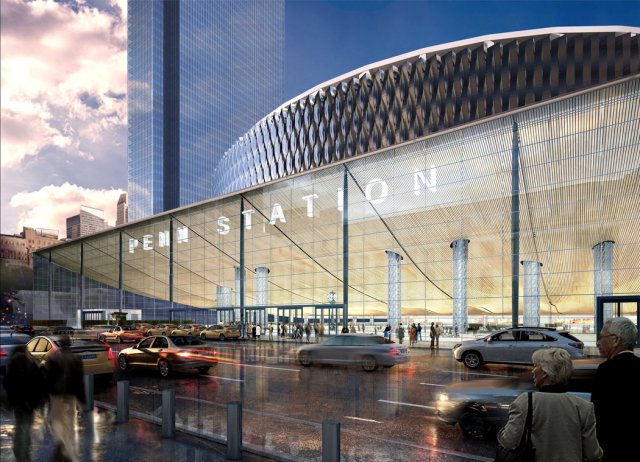 This blog was begun in 2009 as a feature of the Providence Journal, where I was on the editorial board and wrote a weekly column of architecture criticism for three decades. Architecture Here and There fights the style wars for classical architecture and against modern architecture, no holds barred. History Press asked me to write and in August 2017 published my first book, "Lost Providence." I am now writing my second book. My freelance writing on architecture and other topics addresses issues of design and culture locally and globally. I am a member of the board of the New England chapter of the Institute of Classical Architecture & Art, which bestowed an Arthur Ross Award on me in 2002. I work from Providence, R.I., where I live with my wife Victoria, my son Billy and our cat Gato. If you would like to employ my writing and editing to improve your work, please email me at my consultancy, dbrussat@gmail.com, or call 401.351.0457. Testimonial: "Your work is so wonderful - you now enter my mind and write what I would have written." - Nikos Salingaros, mathematician at the University of Texas, architectural theorist and author of many books.
View all posts by David Brussat →
This entry was posted in Architecture, Architecture History, Art and design, Development, Preservation, Urbanism and planning and tagged Farley Post Office, Michael Kimmelman, Moynihan Station, New York Times, Penn Station, Richard Cameron. Bookmark the permalink.