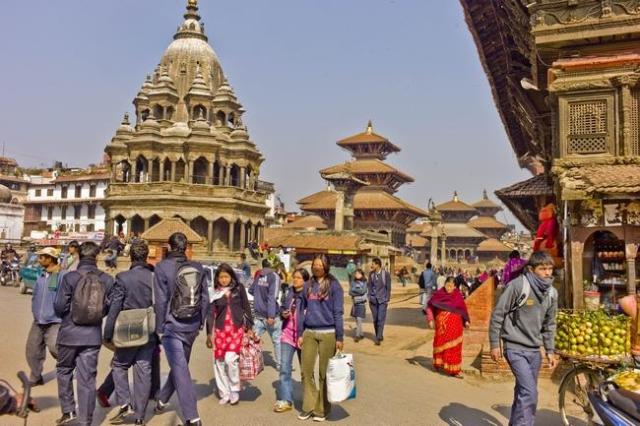 In happier times: Palaces and temples of Patan’s Durbar Marg, one of three royal squares leveled by the earthquake. (Photo by Philip Lieberman; courtesy of The Providence Journal)

The death toll from earthquakes in Nepal have reached well into the thousands. Coverage of rescue efforts has understandably taken priority over news of the terrible cultural cost of the disaster. The Nepalese capital of Kathmandu and other ancient centers have seen much of their heritage destroyed, in ways that not only took more lives in collapse but left a population of suffering survivors all the worse.

The Providence Journal today published an excellent essay by Marcia Lieberman, “Nepal quake destroys priceless heritage,” that elucidates the loss. Lieberman, a Providence resident who spent years in Nepal sponsoring educational opportunities for Nepalese children, briefly describes the rise of Newar culture in Nepal and its relationship with other Asian societies, from which it clearly learned (and taught) a great deal.

But she focuses largely on the artistry of the Newar architecture. Here she describes how some of the ancient squares recently destroyed were decked out in ceremonial ornament for the people and for their gods:

The flowering of Newar genius compares to the European renaissance, especially to the glories of Florence. The Newars excelled at every art to which they turned their hands and minds: architecture, sculpture and metalwork. But perhaps the quintessential Newar art was woodcarving. They turned wood into lace. The Newar window became a thing of art, a vehicle for lavish display of the carver’s skill and imagination, so that instead of a rectangular hole poked into a wall, the window became a richly decorative, exuberant, even playful architectural element. Elaborately carved wooden roof struts were embellished with intricate figures of gods and creatures. Wooden lattices on the surface of brick walls created beguiling patterns of design and texture, much as Persians, Turks and others did upon flat expanses of woven carpet. 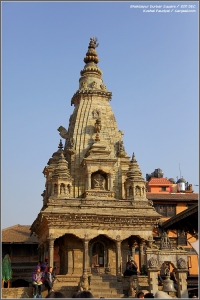 Pop quiz: What building in Rhode Island does this Nepalese temple resemble, and why? (sanjaal.com)

Tibetan architecture, largely influenced by Chinese and Indian cultures, reaches back centuries before first contact with Western European culture. Yet its civic buildings reflect the essentials of Greco-Roman classicism, with its reverence for symmetry and ornament. Both have deep roots within the biological makeup of the human genome. Decoration is as natural to mankind as procreation – and indeed, the development over time of architecture throughout the world bears more than just a resemblance to the procreative process. Love for beauty is part and parcel of that process. Decoration not only has utilitarian purposes such as the protection of joints from rain and weather, but arouses a veneration instrumental to the costly maintenance of buildings over the centuries. Classicism is the genuine international style.

It is unlikely that the Nepalese, who have an active political life, blame the style of Nepal’s buildings for the misbehavior of their rulers. (Slavery was abolished in 1924; monarchy in 2008.) No, that’s a purely Western phenomenon, and embraced here only by those with enough higher education in art and architecture to believe really stupid things.

I hope that the destroyed monuments of Nepalese culture have been documented enough to be replicated. The hope of rebuilding the original Penn Station in New York is based in part on extensive documentation of the building as it was constructed. But, based on the extreme penchant among the elite for novelty over tradition, New Yorkers demolished Penn Station, and now some want to rebuild it with cockamamie new designs. Now that there is a serious plan to rebuild Penn Station as it was originally designed by Charles Follen McKim, those idiotic modernist proposals should naturally fall by the wayside as New Yorkers look to their future.

It is unlikely that the Nepalese have given even a moment’s contemplation to importing a hack like Frank Gehry to build shiny new objects for their worship. Americans who seek to help Nepal recover should focus at least some attention on reconstructing the beautiful places that helped to make them such a happy people.

[Here, in Carfree Times, is a much fuller account of the damage to Nepal.]

This blog was begun in 2009 as a feature of the Providence Journal, where I was on the editorial board and wrote a weekly column of architecture criticism for three decades. Architecture Here and There fights the style wars for classical architecture and against modern architecture, no holds barred. History Press asked me to write and in August 2017 published my first book, "Lost Providence." I am now writing my second book. My freelance writing on architecture and other topics addresses issues of design and culture locally and globally. I am a member of the board of the New England chapter of the Institute of Classical Architecture & Art, which bestowed an Arthur Ross Award on me in 2002. I work from Providence, R.I., where I live with my wife Victoria, my son Billy and our cat Gato. If you would like to employ my writing and editing to improve your work, please email me at my consultancy, dbrussat@gmail.com, or call 401.351.0457. Testimonial: "Your work is so wonderful - you now enter my mind and write what I would have written." - Nikos Salingaros, mathematician at the University of Texas, architectural theorist and author of many books.
View all posts by David Brussat →
This entry was posted in Architecture, Architecture History, Art and design, Other countries, Preservation, Urbanism and planning and tagged classical architecture, Craftsmanship, Earthquake, Katmandu, Marcia Lieberman, Nepal, Penn Station, Providence Journal, Reconstruction. Bookmark the permalink.