At the Ecole des Beaux-Arts

Portion of the elevation of a seaside casino, 1889. (Rizzoli)

Friday evening’s lecture by Margot Ellis at the College Club of Boston about Americans in Paris, the book she wrote with Jean Paul Carlhian about the American students at L’École des Beaux-Arts, was a marvel to behold – as is the book. Her discussion was sponsored by the New England chapter of the Institute of Classical Architecture & Art. The book has just been published by Rizzoli. It is subtitled “Foundations of America’s Architectural Gilded Age: Architecture Students at the École des Beaux-Arts 1846 to 1946.”

The book is as rich as its title. Anyone who likes to luxuriate in highly detailed drawings of great buildings by the grand masters of architectural composition and rendering in India ink and color wash – well, step right in and wallow. But anyone who expects the range of stylistic variety here to be narrow, be warned. Yes, there are enchanting classical pieces such as the seaside casino by French student Constant-Desiré Despradelle in 1889, above, and the city hall by William Van Alen in 1909 (he later designed the Chrysler Building), at left. But there are also many instances of far-less-than-strictly-canonical pieces such as the forester’s house by Paul Armon Davis III in 1897, below, and the guard house for a large property by Everett Victor Meeks in 1908, bottom.

The classical orders may have been designed to be obeyed, like your mother, but in practice, while the cat’s away, working architects – and the students at the École certainly worked – would play. Encouraging such play is what the canon, any canon, is, or should be, all about. Understanding orthodoxy is key to any truly valuable sense of the heterodoxical. But it is a mistake to think of the canon as a ball and chain. No, it is a springboard, a springboard to beauty, which can be achieved by hewing close to its prescriptions no less than by wandering toward liberation far away.

Margot Ellis emphasized that the American students of whom she and Jean Paul Carlhian (who died in 2012) wrote were “always adding in an American freedom from orthodoxy.” Perhaps the French are more wedded than we are to the canon of strict symmetrical classicism, but Ellis carries a notebook for her engagements with a picture of the Eiffel Tower under the motto “Paris Is Always a Good Idea.” The City of Light certainly demonstrates that it’s hard cheat beauty by embracing the ancient principles of classical orthodoxy. So wander if you like, but do not fear that by sticking to the canon you are doing any harm to the future of enchantment in the world.

The profusion of work on display in this excellent book, both that of students and that of practitioners putting their educations to work after returning to America, demonstrates the high variety of roads that may be traveled to get from the classical to the beautiful.

(By the way, in my post previewing the lecture I wondered what the graduates of the Ecole des Beaux-Arts produce today. Well, it appears that its architecture school no longer exists – it closed in 1968 – but the school itself still does, and draws students eager to paint and sculpt. I suppose my question remains valid, albeit not directed as I’d expected.) 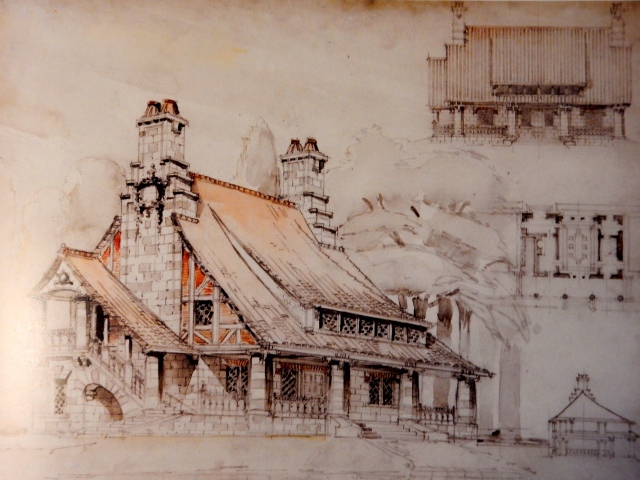 This blog was begun in 2009 as a feature of the Providence Journal, where I was on the editorial board and wrote a weekly column of architecture criticism for three decades. Architecture Here and There fights the style wars for classical architecture and against modern architecture, no holds barred. History Press asked me to write and in August 2017 published my first book, "Lost Providence." I am now writing my second book. My freelance writing on architecture and other topics addresses issues of design and culture locally and globally. I am a member of the board of the New England chapter of the Institute of Classical Architecture & Art, which bestowed an Arthur Ross Award on me in 2002. I work from Providence, R.I., where I live with my wife Victoria, my son Billy and our cat Gato. If you would like to employ my writing and editing to improve your work, please email me at my consultancy, dbrussat@gmail.com, or call 401.351.0457. Testimonial: "Your work is so wonderful - you now enter my mind and write what I would have written." - Nikos Salingaros, mathematician at the University of Texas, architectural theorist and author of many books.
View all posts by David Brussat →
This entry was posted in Architects, Architecture, Architecture Education, Architecture History, Art and design, Book/Film Reviews and tagged Americans in Paris, Ecole des Beaux Arts, Institute of Classical Architecture & Art, Jean Paul Carlhian, Margot Ellis, Paris. Bookmark the permalink.

1 Response to At the Ecole des Beaux-Arts