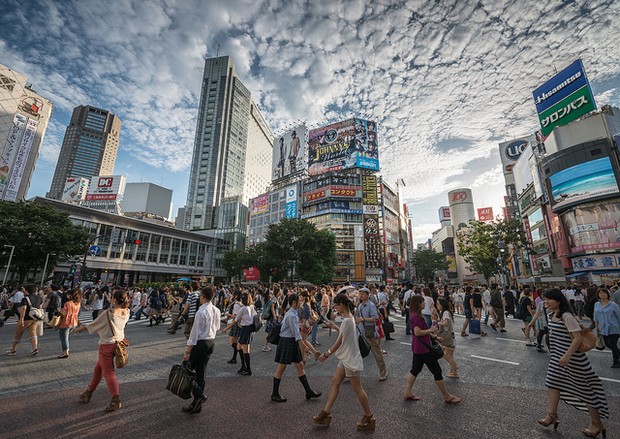 “Scramble” intersection in the Shibuya section of Tokyo. (Thomas/Flickr)

City Lab has an article by Eric Jaffe called “Toward a Simple and Universal Law of Pedestrian Behavior” that belongs in the files of the Department of Redundancy Department. Not that it isn’t interesting. To a flâneur like me, anything about whatever happens on a sidewalk in a city is interesting. So go ahead and read it, click the links and wander through the obvious, oblivious (if you can manage remaining so) to the amount of grant money being spent on stuff like this.

People are good at walking. They are much better at driving than is acknowledged. (Which city doesn’t believe its drivers are the worst!) If people really were bad drivers, more of them would be dead. A lot more. People are good drivers in much the same way they are good walkers. It’s instinctual. Being a good walker is a good thing, but the hazard represented by other pedestrians is precisely suggested by the fact, as determined by the study written up by Jaffe, that energy devoted to avoiding other pedestrians does not increase until a collision is about to occur. Duh!

Although it hardly takes place on a city sidewalk, I prefer to wallow in William Hazlitt’s “On Going a Journey,” written by the British essayist in 1821. Here he is describing why he’d rather walk alone in the countryside than with someone else: 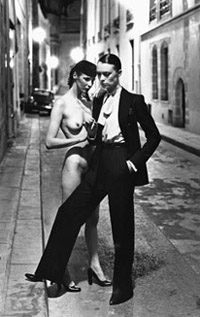 “How to be a flaneur” is the caption of this image. (mookychick.co.uk)

Instead of an awkward silence, broken by attempts at wit or dull common-places, mine is that undisturbed silence of the heart which alone is perfect eloquence. No one likes puns, alliterations, antitheses, argument, and analysis better than I do; but I sometimes had rather be without them. “Leave, oh, leave me to my repose!” I have just now other business in hand, which would seem idle to you, but is with me “the very stuff of the conscience.” Is not this wild rose sweet without a comment? Does not this daisy leap to my heart, set in its coat of emerald? Yet if I were to explain to you the circumstance that has so endeared it to me, you would only smile. Had I not better then keep it to myself, and let it serve me to brood over, from here to yonder craggy point, and from thence onward to the far-distant horizon? I should be bad company all that way, and therefore prefer being alone.

Don’t expect to come across any wild roses or daisies in that hardscape pavement in the photo of that forlorn plaza in the megacity wannabe pictured atop this post. (Oops! Just learned it’s in Tokyo!) And if your gaze follows the cutie crossing your path – watch out! You may find that the energy you must devote to avoiding collision is otherwise engaged, and that you will not avoid colliding with that other fellow who has made the same observation as you.

This blog was begun in 2009 as a feature of the Providence Journal, where I was on the editorial board and wrote a weekly column of architecture criticism for three decades. Architecture Here and There fights the style wars for classical architecture and against modern architecture, no holds barred. History Press asked me to write and in August 2017 published my first book, "Lost Providence." I am now writing my second book. My freelance writing on architecture and other topics addresses issues of design and culture locally and globally. I am a member of the board of the New England chapter of the Institute of Classical Architecture & Art, which bestowed an Arthur Ross Award on me in 2002. I work from Providence, R.I., where I live with my wife Victoria, my son Billy and our cat Gato. If you would like to employ my writing and editing to improve your work, please email me at my consultancy, dbrussat@gmail.com, or call 401.351.0457. Testimonial: "Your work is so wonderful - you now enter my mind and write what I would have written." - Nikos Salingaros, mathematician at the University of Texas, architectural theorist and author of many books.
View all posts by David Brussat →
This entry was posted in Architecture, Landscape Architecture, Uncategorized, Urbanism and planning and tagged City Lab, Eric Jaffe, Flaneur, Pedestrian, Plaza, William Hazlitt. Bookmark the permalink.

1 Response to Surprise! Walkers can drive