A “cauldron of perversions” 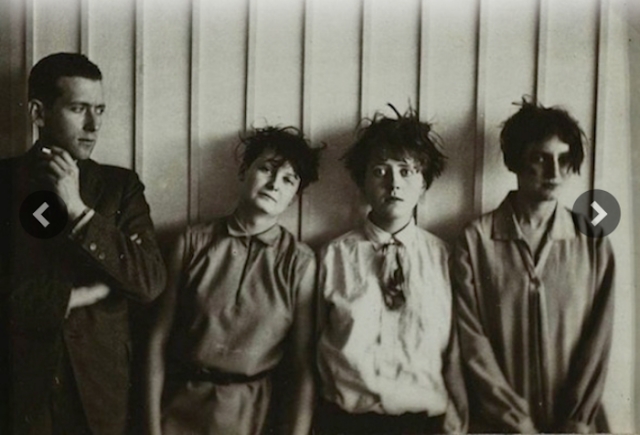 Caption by Metropolis: “Marcel Breuer and his “harem” (from left to right: Marta Erps, Katt Both, and Ruth Hollós-Consemüller), c. 1927. Stephan Consemüller/Photo: Bauhaus-Museum.”

I did a double-take when I saw, in Metropolis, the article “Far From Being a Temple to Rationality, the Bauhaus Was a Cauldron of Perversions,” by Beatriz Colomina. Of course, I knew that already, having read “Making Dystopia,” James Stevens Curl’s recent book on modern architecture. Professor Curl recounted the troubling history of the Bauhaus school, and deplored its perversions, leading me (for some demented reason) to expect more condemnation from Colomina.

She writes: “Bauhauslers were engaged with everything that escapes rationality: sexuality, violence, esoteric philosophies, occultism, disease, the psyche, pharmacology, extraterrestrial life, artificial intelligence, chance, the primitive, the fetish, the animal, plants, etc.” She piles on some more about Le Corbusier, who though not a Bauhausler was “arguably the single most influential architect of the 20th century”:

He was deeply into the occult, esoteric philosophies, sexual complexities, cross-dressing, scatology; he was also obsessed with the toilet, disease, nudism, body building, the animal, and the other.

Not to mention (which she doesn’t) adultery, dishonesty and fascism. Who could suppose that Corbu’s personal idiosyncrasies would be systematized at the Bauhaus?

Not what you’d expect of a school that developed a new architecture that emphasized rationality, honesty, worker housing and other high-flying principles. Far from deploring this history, however, Colomina greets the “deeply transgressive ideas and pedagogies” of the Bauhaus with celebration.

No doubt her article was written largely to get ahead of the curve on bad news that is emerging about the Bauhaus during the centennial of its founding in 1919. How, she must have wondered, can I give all that creepy stuff a positive spin? Well, Colomina is not a professor of architecture at Princeton for nothing.

She writes– but wait, there’s just too much really strange material in the article to go right into discussing Colomina’s spin analytics. So, please be patient. One more example:

The leather of Luftwaffe jackets used by fighter pilots and Berlin’s S&M and lesbian clubs made its way into the Bauhaus as a symbol of cultural rebellion and sensuality in clothes, both male and female. Chairs bound like corsets and leather straps lying around inexplicably in photographs suggest something illicit.

Okay, so let’s consider how she spins the Bauhaus school’s perversions:

Modern architecture is usually understood as having a normalizing function, establishing patterns that are stable, predictable, and to some extent standardized. The idea of architecture is intimately associated with the idea of the normal—perhaps it even sees itself as the caretaker of the normal. But the normal is not normal. It is a construction. There is a hidden tradition in architecture of the transgressive, work that crosses the lines of the normal, complicating these lines, threatening the limit.

But first: No sensible reader can avoid quarreling with Colomina’s notion that modern architecture has “a normalizing function, establishing patterns that are stable, predictable,” etc. That may reasonably be said of the traditional architecture that modernism had evicted by 1950. Modern architecture is the opposite of all that, and has been recognized as such by almost everyone except its purveyors since the foundation of the Bauhaus.

Turning the abnormal into the normal (“normalizing” x, y or z abnormality) might be deemed the intellectual work of our modern culture this past half century. Inversion as a rhetorical tactic that can easily defeat itself. Colomina appears to have engaged in a triple inversion: she falsely associates modern architecture with stability and normality, then announces that “the normal is not normal. It is a construction,” and finally asks her readers to consider the abnormal normal. Whew! Jacques Derrida call your office!

In From Our House to Bauhaus, Tom Wolfe wrote that Corbusier’s logic “flies higher and higher in ever-decreasing concentric circles until, with one last utterly inevitable induction, he disappears up his own fundamental aperture.” Colomina, whose logic brings that quote to mind, adds:

Perversion comes from the Latin pervertere, “to turn away,” that is, turning away from normality. There is a relationship between the personal, often extreme, pathologies of Modern architecture and the call for a new normal. … [The Bauhaus school] was like a laboratory for inventing and intensifying perversions as a kind of pedagogical strategy. I am reclaiming here the term “perversion” from its pejorative use to a positive one, in the same way that the label “queer” was reclaimed in the 1980s by gay activists. In fact, inspired by my students at Princeton, I would like to make a call for a queering not just of the Bauhaus but of architectural history, starting with the way we read Modern architecture—what we see or choose not to see.

Actually, the Bauhaus and modern architecture were “queered” long ago, and no amount of tomfoolery over whether what we see is what we think we see can make it any more queer. (I hasten to add that I have used the word in its archaic meaning.)

This sort of spin might work on Colomina’s students or even the broader world of architecture-school faculty, but for most of them it’s carrying coals to Newcastle – esoteric matter that they internalized as students. It probably zooms over the head of most modern architects – who do what they learned in school and don’t give much thought to its philosophical origins, which give them a headache. The general public, who already have headaches from the prevailing dystopia, will never hear a word of it.

I’d better end this post before it follows Colomina up where the sun don’t shine.

(Wolfe aficionados will note my stopping short before the end of the “fundamental aperture” quote, which concludes: “… and emerges in the fourth dimension as a needle-thin umber bird.” That was for a similar reason. To me it seems to risk gilding the lily. At least that’s not as bad as gilding the turd – or, shall we say, putting lipstick on a pig, which appears to be the academic specialty of Professor Colomina.)

This blog was begun in 2009 as a feature of the Providence Journal, where I was on the editorial board and wrote a weekly column of architecture criticism for three decades. Architecture Here and There fights the style wars for classical architecture and against modern architecture, no holds barred. History Press asked me to write and in August 2017 published my first book, "Lost Providence." I am now writing my second book. My freelance writing on architecture and other topics addresses issues of design and culture locally and globally. I am a member of the board of the New England chapter of the Institute of Classical Architecture & Art, which bestowed an Arthur Ross Award on me in 2002. I work from Providence, R.I., where I live with my wife Victoria, my son Billy and our cat Gato. If you would like to employ my writing and editing to improve your work, please email me at my consultancy, dbrussat@gmail.com, or call 401.351.0457. Testimonial: "Your work is so wonderful - you now enter my mind and write what I would have written." - Nikos Salingaros, mathematician at the University of Texas, architectural theorist and author of many books.
View all posts by David Brussat →
This entry was posted in Architecture, Architecture History and tagged Bauhaus, Beatriz Colomina, Corbusier, From Our House to Bauhaus, James Stevens Curl, Making Dystopia, Metropolis, Modern Architecture, Perversion, Tom Wolfe. Bookmark the permalink.

7 Responses to A “cauldron of perversions”