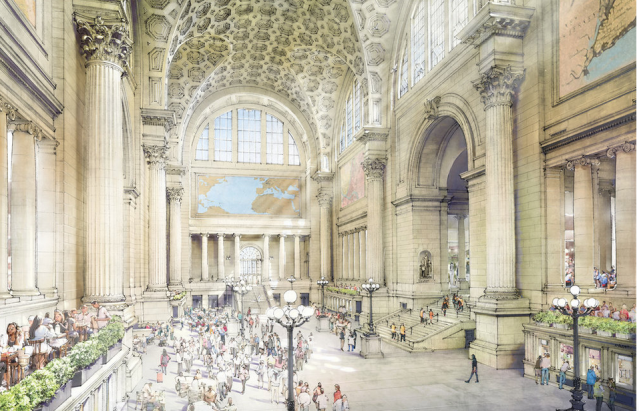 Why didn’t I think of that?

Why didn’t anyone think of that?

Now the National Civic Art Society has thought of that. It has begun an ad campaign to rebuild Penn Station as it was originally designed by Charles Follen McKim of McKim Mead & White, the famous Beaux-Arts firm of the Gilded Age. Penn Station was razed in 1963, a mere five decades after it opened in 1910. It was replaced by a monstrosity hated by all who use it.

“One entered the city like a god,” said the architectural historian Vincent Scully. “One scuttles in now like a rat.”

The Rebuild Penn Station group has proposed a workable plan to rebuild the station according to the original designs, upgrading it with new technologies and tweaking the design to accommodate traveler needs and visitor desires of the 21st Century. Grand Central Terminal, which was saved by the historic preservation movement that arose in reaction to Penn Station’s demolition, is now the city’s second most popular tourist attraction.

Rebuilding and financing Penn Station is more feasible than most people imagine. New technologies make it possible to afford the elegant old forms, much of the granite from the old station remains in New Jersey, where it was dumped, McKim’s blueprints are still available, and the original foundation remains intact. Funds from air-rights and tax-increment packages raised by redeveloping the district around a rebuilt Penn Station, and possibly from federal infrastructure programs, would make the project feasible. The plan could be easily integrated into the expansion of the current Penn Station into Moynihan Station next door, which will only serve 20 percent of the ridership currently arriving and departing the existing station.

But how would people know? Most people don’t read architecture magazines, let alone blogs like this, and most architecture magazines look down their noses at the idea of beauty, let alone the idea of a rebuilt Penn Station, since their definition of creativity is out of date, if not downright old-fashioned. An ad campaign is sure to get more people thinking about the possibilities and asking the questions that need to be answered. Put the ad on commuter trains, buses, Amtrak, sidewalk kiosks – hell, put it up in a blaze of digital glory on Times Square!

The NCAS and RPS are right to keep the ads simple and beautiful. The drawings of a new Penn Station are by Jeff Stikeman. He hits all the right buttons. See the video about the project at the Rebuild Penn Station link above. (I would do yet another poster using the motto “Enter Like a God Again.” Not a soul in New York fails to understand what that means.) 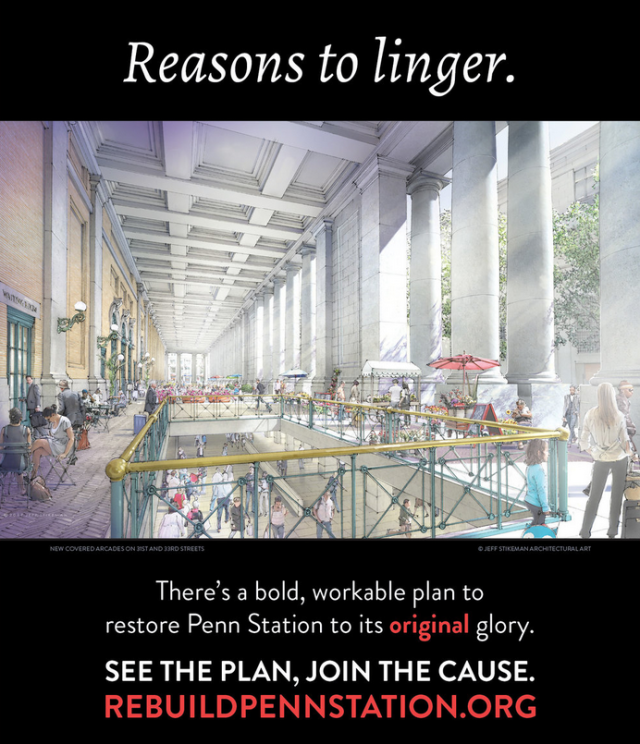 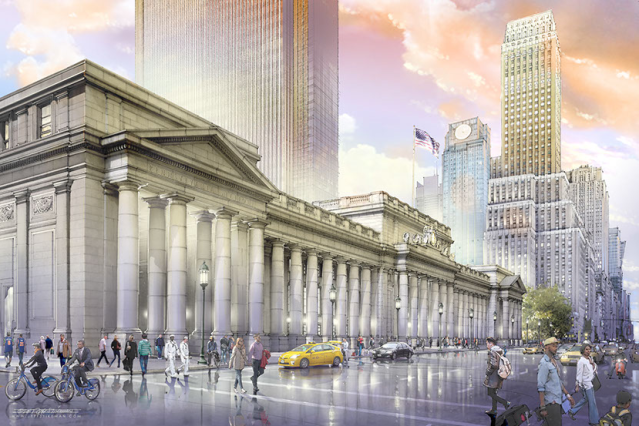 This blog was begun in 2009 as a feature of the Providence Journal, where I was on the editorial board and wrote a weekly column of architecture criticism for three decades. Architecture Here and There fights the style wars for classical architecture and against modern architecture, no holds barred. History Press asked me to write and in August 2017 published my first book, "Lost Providence." I am now writing my second book. My freelance writing on architecture and other topics addresses issues of design and culture locally and globally. I am a member of the board of the New England chapter of the Institute of Classical Architecture & Art, which bestowed an Arthur Ross Award on me in 2002. I work from Providence, R.I., where I live with my wife Victoria, my son Billy and our cat Gato. If you would like to employ my writing and editing to improve your work, please email me at my consultancy, dbrussat@gmail.com, or call 401.351.0457. Testimonial: "Your work is so wonderful - you now enter my mind and write what I would have written." - Nikos Salingaros, mathematician at the University of Texas, architectural theorist and author of many books.
View all posts by David Brussat →
This entry was posted in Architecture, Development and tagged Advertising, American Civic Art Society, Charles Follen McKim, Historic Preservation, McKim Mead & White, Penn Station, Rebuild Penn Station. Bookmark the permalink.