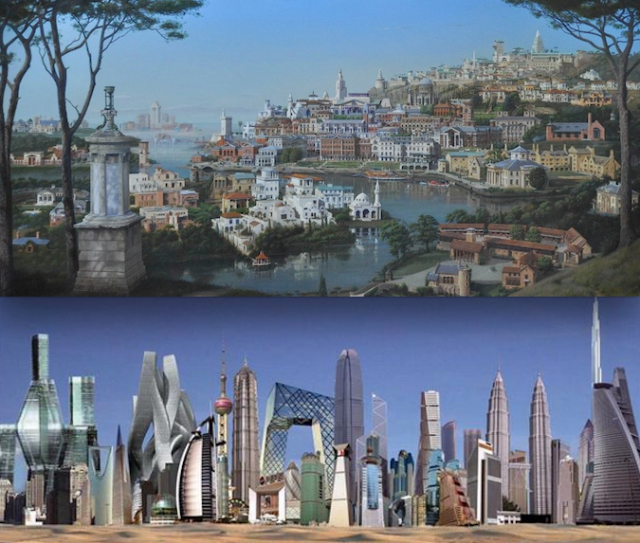 Juxtaposed above are two images designed to suggest the basic difference between traditional and modern architecture. They may be assumed to reflect the general tastes in architecture of the authors of the essays discussed below.

The leftwing journal Current Affairs ran “Why You Hate Contemporary Architecture,” a massive, and massively effective, assault by its two top editors, Brianna Rennix and Nathan Robinson, on modern architecture the other day. It apparently hit a nerve.

The website Common/Edge, which pretends to a sort of middle-way stance in the style wars of architecture, has run a rebuttal to “Why You Hate” called “The Politics of Architecture Are Not a Matter of Taste.” It is by Marianela D’Aprile, described as “an architectural worker, writer, and educator based in Chicago.” The description adds that “her work addresses the intersection of politics and architecture, with a focus on Latin America, Left movements, state violence, and public spaces.” Don’t say I didn’t warn you.

The [Currant Affairs] piece, written in a pseudo-funny Internet lexicon wherein all objects of criticism are “garbage,” is so laden with irony—the poorest of substitutes for analysis—that it is difficult to discern a core argument. Still, I’d like to question the central premise of the piece: that what the authors term “contemporary architecture” is ugly and oppressive, and that liking it is nothing shy of immoral.

What is a “pseudo-funny Internet lexicon”? The piece is funny, but it is also  quite strictly straightforward in its assertions, without any “Internet lexicon” that I could detect. The word “garbage” appears twice in the very lengthy essay, first in a caption below a building that looks like a square giraffe’s neck; the other in a line that refers to popular taste, especially paintings by Thomas Kincaide. In almost every case where a building is criticized, it is described in specific terms that are often downright hilarious but also relate to the particular characteristic of modernism that is being evaluated.

D’Aprile says it is “difficult to discern a core argument.” She then states what she thinks is its central premise, which she manages to describe with considerable accuracy because the authors state it straightforwardly numerous times throughout their essay.

More curious is her assertion that Robinson and Rennix’s essay is “laden with irony.” That is simply not true, not that I can tell. D’Aprile apparently misunderstands the word irony, which she takes to mean anything that causes her to do a double-take, a sort of cognitive dissonance generated by assertions she dislikes and, in her modernist cocoon, has no experience confronting. We cannot know for sure what she really means by irony, but we can guess that she used the word in an attempt to make readers who liked the essay suspect that they might not have understood it. In some leftist circles, traditional architecture requires a trigger warning.

I don’t know that I’d agree that D’Aprile is correct to assert that the central premise of Robinson and Rennix’s essay concludes that liking modern architecture “is nothing shy of immoral.” She does not go on to say why she thinks that. I could find no assertion of it in their article. She probably is channeling her apparent belief that since morality is a religious thing and since most churches are of traditional design, modern architecture must be immoral. (Tell it to the Pope!)

Her rebuttal’s main point is that “elite and ruling classes” had a hand in what Rennix and Robinson consider beautiful, and that fact alone renders both the architecture and their judgment of it suspect. But the wealthy always have a hand in architecture since all but the most modest buildings cost too much for the average person to build. So what D’Aprile considers beautiful springs equally from capitalism, either pre-WWII versions of wealth accumulation, including pre- or postwar communism, or whatever capitalism may consist of today. Robinson and Bennix are not saying modern architecture is immoral, just lacking in thoughtfulness and sensitivity. Mostly they object to modern architecture’s “twisted effort to ‘rationalize’ human beings rather than accept them as they are and build places that suit them and that they like.”

Like many who have responded to my own musings on architecture over the years, D’Aprile seems especially upset at grouping buildings as modernist or traditional. She is miffed that Rennix and Robinson peg as “contemporary architecture” two very different styles of modernist building, Lina Bo Bardi’s Brutalist SESC Pompéia (1982) and Morphosis’s Deconstrutivist District 7 Caltrans Headquarters (2004). But clearly they are both modernist. If I had a nickle for every time a mod-symp twitted me for grouping, say, Corbusier’s Villa Savoye and Gehry’s Guggenheim Bilbao under the umbrella of modern architecture, I could buy a cup of coffee at Starbucks.

That’s why the title of her essay refers to both politics and taste. She wants to inject politics into architecture while extracting taste. Being uneasy about modern architecture is a nonpartisan feeling, so she wants to bamboozle those who feel that way into doubting the validity of their own taste.

D’Aprile’s article is no more than a collection of erroneous descriptions and assertions designed to cast aspersions on the moment of rhetorical clarity represented by the essay she condemns. She assumes that readers on the left will take her drift and dismiss the essay by Robinson and Rennix as beyond the pale, and unworthy of discussion in polite circles. I, for one, cannot imagine how they found the courage to publish their thoughts.

So I am glad that Kristen Richards, editor of ArchNewsNow.com, plans to pair both articles in her invaluable daily (free) collection of architectural writing from newspapers and magazines around the world. That way, people can read them together, and judge for themselves which essay best illuminates the style wars.

(I posted with great joy on Rennix and Robinson’s essay two weeks ago in “Left vs. modern architecture!“)

This blog was begun in 2009 as a feature of the Providence Journal, where I was on the editorial board and wrote a weekly column of architecture criticism for three decades. Architecture Here and There fights the style wars for classical architecture and against modern architecture, no holds barred. History Press asked me to write and in August 2017 published my first book, "Lost Providence." I am now writing my second book. My freelance writing on architecture and other topics addresses issues of design and culture locally and globally. I am a member of the board of the New England chapter of the Institute of Classical Architecture & Art, which bestowed an Arthur Ross Award on me in 2002. I work from Providence, R.I., where I live with my wife Victoria, my son Billy and our cat Gato. If you would like to employ my writing and editing to improve your work, please email me at my consultancy, dbrussat@gmail.com, or call 401.351.0457. Testimonial: "Your work is so wonderful - you now enter my mind and write what I would have written." - Nikos Salingaros, mathematician at the University of Texas, architectural theorist and author of many books.
View all posts by David Brussat →
This entry was posted in Architecture and tagged ArchNewsNow.com, Brianna Rennix, Common Edge, Current Affairs, Kristen Richards, Marianela D'Aprile, Modern Architecture, Nathan Robinson, Politics, Pope, Pope Francis, Taste. Bookmark the permalink.