The State House Lawn and Park are identified among a dozen major open spaces across the nation as at risk by the Cultural Landscape Foundation, in Washington, D.C.. The foundation’s Landslide 2017 report “Open Season on Open Space” is concerned about open space (including the Boston Common) deemed at risk due to development, looming shadows, resource extraction, devaluation of cultural importance or other apparent threats. For now, the report’s discussion of the State House grounds, including State House Park, the grassy patch west of Providence Station, is of interest here.

The report describes the increased protection of open space by Rhode Island authorities since the State House was completed in 1901, and its grounds in 1904. That still left the gulch between the State House and downtown filled with railroad trackage and, later, vast parking lots for automobiles. State House Park was created along with the Capital Center District in the late 1970s and early ’80s, which slated the gulch for development and mandated protection for open space near and view corridors toward the State House.

The most vital natural view corridor to the State House was not respected by city and state planners, however. The Providence River was reopened and lined with parks, elegant bridges and river walks, but the view of the State House from downriver was blocked in 1990 by an early Capital Center development, One Citizens Plaza. For that reason I call it the Darth Vader Building. As seen from the Crawford Street Bridge, the Independent Man peeps through a view corridor that amounts to several inches!

More recently, the Capital Center Commission was unable to block the General Assembly from paving over part of the State House lawn for parking. Perhaps with that lapse in mind, commission chairman Deming Sherman has been quick to condemn the latest threat to the State House environs. State transportation officials want to build a new bus hub along with private development on open space both east and west of Providence Station, encroaching on the State House lawn, which would be narrowed. This is the proposal that has energized the Cultural Landscape Foundation.

Sherman recently expressed “severe reservations” about the plan, and has been joined by his predecessor, Leslie Gardner, who called it “a little bizarre.”

Other aspects of the proposal should raise even more concern. The state’s portion of the funds for this bad idea comes from a $35 million bond issue approved by voters in 2014, which said nothing of replacing Kennedy Plaza as the central bus hub. The DOT decision to call for private developers to join in the project highlights its lack of confidence in the project’s viability. DOT’s call for the plan to include a “skyline altering” tower, and the suspicion that it might turn out to be offices for state employees, put an exclamation point on its obvious financial and aesthetic doltishness.

The major goal of the bond originally was to link transit riders between Kennedy Plaza and Providence Station – which could’ve been (and still can be) accomplished with a simple bus loop costing a few thousand dollars a year. If officials want to make room for a civic plaza in KP (as if Burnside Park is not good enough), they can return the bus routes to the traditional system, with buses picking up passengers not at a central nexus but every block or so throughout downtown.

Either way, there’s no call for, and no good case for, buildings encroaching upon the State House lawn or State House Park. Period.

Of course, the generally tedious quality of most of the architecture erected in Capital Center over the past three decades is an insult to the beautiful State House that few civic leaders around here care to notice. R.I.’s Amazon HQ2 proposal takes this to heights that would moot the existence of the State House lawn whether it is encroached upon or left alone to behold Roger Williams spinning in his grave. 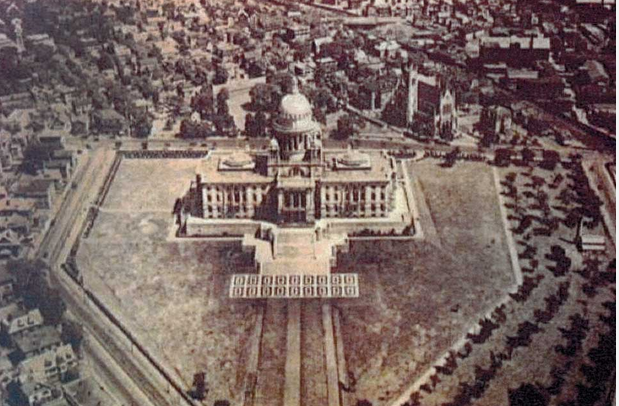 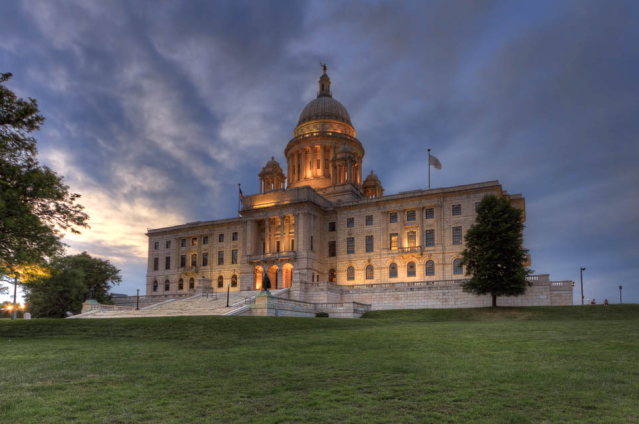 This blog was begun in 2009 as a feature of the Providence Journal, where I was on the editorial board and wrote a weekly column of architecture criticism for three decades. Architecture Here and There fights the style wars for classical architecture and against modern architecture, no holds barred. History Press asked me to write and in August 2017 published my first book, "Lost Providence." I am now writing my second book. My freelance writing on architecture and other topics addresses issues of design and culture locally and globally. I am a member of the board of the New England chapter of the Institute of Classical Architecture & Art, which bestowed an Arthur Ross Award on me in 2002. I work from Providence, R.I., where I live with my wife Victoria, my son Billy and our cat Gato. If you would like to employ my writing and editing to improve your work, please email me at my consultancy, dbrussat@gmail.com, or call 401.351.0457. Testimonial: "Your work is so wonderful - you now enter my mind and write what I would have written." - Nikos Salingaros, mathematician at the University of Texas, architectural theorist and author of many books.
View all posts by David Brussat →
This entry was posted in Architecture, Preservation and tagged Capital Center, Cultural Landscape Foundat;ion, Deming Sherman, Rhode Island, Rhode Island State House, RIDOT, State House Lawn, State House Park, View Corridors. Bookmark the permalink.