Maya Lin’s Wall on the Mall, dedicated to Vietnam’s fallen warriors, has long struck me as being less than the optimal commemoration of a national tragedy. Its gash in the Mall looks as if it symbolizes a loss in conflict as much as a loss of life. Balancing this, and equally controversial, was a sculpture added, to Lin’s dismay, of three soldiers, by the late Frederick Hart. The architectural historian Catesby Leigh has written an even-handed account of the memorial’s victory in a major design competition, the artist’s relationship to the committee that commissioned the contest, battles between supporters and opponents of the design, changes resulting from those battles, its erection, its public reception, and the inevitable fluctuations in its reputation and its popularity.

Leigh’s lengthy essay, “Anti-Monument,” appears on a new website called Critical Read devoted to the back story of great works of art, or, in its own words, “Critical Read tells the true stories behind works of the fine, literary, and performing arts.” The subjects on its website so far include queer symbolism, contemporary ballet and Salmon Rushdie.

Leigh properly regrets the recent decline of monumental architecture from traditional memorials honoring community to memorials whose goal seems to be more therapeutic. Here is Leigh’s diplomatic summation of the Wall:

[T]he Wall is an inspired work, if not “a work of genius.” In its stark simplicity and contextually astute insertion in the Mall’s landscape, it enabled a minimalist aesthetic that often repels the public to resonate deeply with it while signaling, as Lutyens’s Thiepval arch had done half a century earlier, a widening of the range of meanings and emotional responses that memorials can elicit. 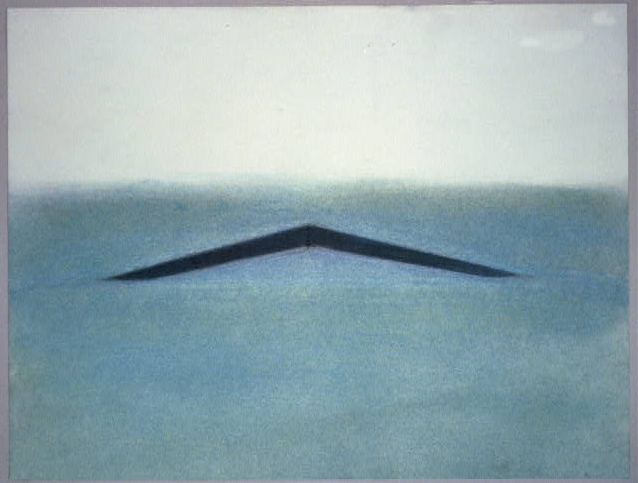 Pastel drawing by Maya Lin included with her competition entry. (Library of Congress)

This blog was begun in 2009 as a feature of the Providence Journal, where I was on the editorial board and wrote a weekly column of architecture criticism for three decades. Architecture Here and There fights the style wars for classical architecture and against modern architecture, no holds barred. History Press asked me to write and in August 2017 published my first book, "Lost Providence." I am now writing my second book. My freelance writing on architecture and other topics addresses issues of design and culture locally and globally. I am a member of the board of the New England chapter of the Institute of Classical Architecture & Art, which bestowed an Arthur Ross Award on me in 2002. I work from Providence, R.I., where I live with my wife Victoria, my son Billy and our cat Gato. If you would like to employ my writing and editing to improve your work, please email me at my consultancy, dbrussat@gmail.com, or call 401.351.0457. Testimonial: "Your work is so wonderful - you now enter my mind and write what I would have written." - Nikos Salingaros, mathematician at the University of Texas, architectural theorist and author of many books.
View all posts by David Brussat →
This entry was posted in Architecture, Art and design and tagged Anti-Monument, Catesby Leigh, Frederick Hart, Maya Lin, Monuments, National Mall, Vietnam War Memorial, Washington DC. Bookmark the permalink.