And the race is on!

Part of the historic district of Charleston, S.C. (HarbourView Inn)

This is a completely absurdist concept for a blog post, but my cab to Green Airport, outside of Providence, will (I hope) pick me up in 45 minutes. So here, to be brief, are images for several proposed buildings in Providence and Charleston, my destination today. Readers play by guessing which buildings are planned for which cities. (Answers at bottom of post.) I will be out of town until Valentine’s Day, next Tuesday.

Whether I manage to post during my trip – I will be on a panel about preservation at the College of Charleston tomorrow – is entirely circumstantial. …

… It is a couple of days later, and after a couple of days at the George IV Inn near the College of Charleston campus, I am staying at the home of my friend Nathan Walker, who as a professor of architectural history invited me down to Charleston to join a C. of C. panel on preservation – more about it later. Now I can finish up this blog, which I failed to complete before leaving Providence because the cab that was supposed to pick me up in 45 minutes arrived in 15 minutes, temporarily aborting this post, which recommences with little left to do but find one more image for readers playing this game to gnaw on below. Not much of a race, it seems.

But here are the four proposed buildings: 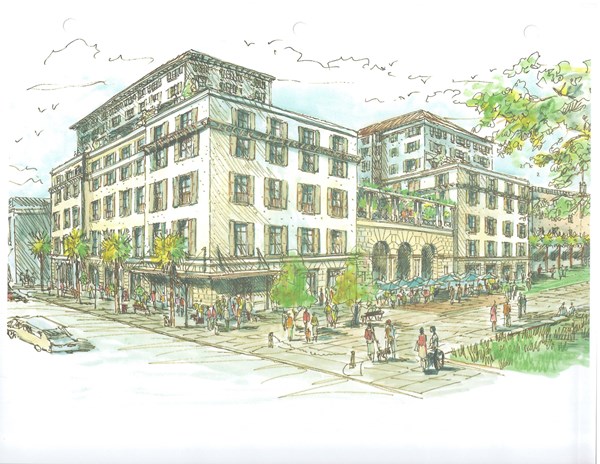 Clearly, knowing which building is which clarifies which city is leading in the sweepstakes for reaching city nirvana first. Both cities are already closer to the finish line than most American cities will ever be, because both were fast out of the preservation gate. But both cities have also allowed modernists to set up obstacles along the way, and are just now trying to negotiate those roadblocks. Charleston brought in Andrés Duany, the leading theorist of the New Urbanism, to reform its development process. Providence has … well, it is difficult to think of what it has done lately to try to put itself back on the path to beauty. It has, in an extremely modest way, watched as “bad trad” poses its weak challenge to the modernist approach preferred by the local design establishment.

This blog was begun in 2009 as a feature of the Providence Journal, where I was on the editorial board and wrote a weekly column of architecture criticism for three decades. Architecture Here and There fights the style wars for classical architecture and against modern architecture, no holds barred. History Press asked me to write and in August 2017 published my first book, "Lost Providence." I am now writing my second book. My freelance writing on architecture and other topics addresses issues of design and culture locally and globally. I am a member of the board of the New England chapter of the Institute of Classical Architecture & Art, which bestowed an Arthur Ross Award on me in 2002. I work from Providence, R.I., where I live with my wife Victoria, my son Billy and our cat Gato. If you would like to employ my writing and editing to improve your work, please email me at my consultancy, dbrussat@gmail.com, or call 401.351.0457. Testimonial: "Your work is so wonderful - you now enter my mind and write what I would have written." - Nikos Salingaros, mathematician at the University of Texas, architectural theorist and author of many books.
View all posts by David Brussat →
This entry was posted in Architecture, Uncategorized and tagged Andres Duany, Charleston SC, College of Charleston, Modern Architecture, Nathaniel Walker, New Traditional Architecture, New Urbanism, Providence RI. Bookmark the permalink.

4 Responses to And the race is on!