Plan Voisin (1925) would have obliterated much of central Paris. (Fondation Le Corbusier)

Here is what Alistair Horne has to say about Le Corbusier in his book Seven Ages of Paris. It is on page 330. In my opinion, he lets the guy off too lightly.

… [A]fter 1919 most new building shifted towards the public sector, with a marked slowing – particularly in the 1930s – in the building of luxury apartments, now stark and become simply “machines for living” with little that was decorative. Instead cinemas started to proliferate. The style of architecture changed, with a brief flash of inventiveness with the arrival of Art Deco in the mid-1920s – almost exclusively for the worse. It was perhaps just as well that there was a depression, with money short, otherwise the Swiss Architect Le Corbusier might well have been able to refashion Paris in his own image. Le Corbusier had plans to destroy much of the centre of Paris on the Right Bank, replacing a grid of shoebox towers over 200 metres [656 feet] high. Perhaps for once Parisians had reason to thank the tangle of municipal building regulations descended from Bonnier’s 1902 prescriptions.

Plus some further animadversions upon what Mencken, in his 1931 essay “The New Architecture,” sloughed off as nothing more than a fad. (If only!)

In practical terms, the one enduring (though visually questionable) success Modernism in Paris could claim was the great Trocadéro complex built for the World Exposition of 1937, although some contemporaries with long memories thought the structure little better than the pseudo-oriental mishmash left over from the last Expo, which it replaced. A man called Freyssinet wanted to construct on Mont Valérien a tower 700 metres [2,297 feet, most of half a mile] high, up which you could drive a car; instead, here, on the site designated by Napoleon for his Palace of the King of Rome [his son], uncompromisingly angular structures (of the sort Mussolini was building in Rome and Stalin in Moscow) were dominated by the Soviet and German pavilions. Symbolic of their time3s, there an aggressive Nazi eagle glared across at the new Soviet Adam and Eve, striding optimistically towards an unrealizable future. Like the regimes they represented, both pavilions would disappear – though the central feature linking them would survive to house the new Modern Art Museum and the Museum of Man.

Well, okay, Alistair Horne is suitably skeptical of Corbu and modern architecture. Below is the Trocadéro, and below that the old Trocadéro to which Horne refers. (Wikipedia) I like both more than he does. When I first saw the (later) Trocadero from the Eiffel Tower, it did not occur to me to condemn it as a modernist blotch on the beauty of Paris but as a work of “stripped” classicism – the architectural establishment’s conventional response, in the years leading up to the fall, to the challenge posed by modernism: classical lines with most of the ornament shaved off. 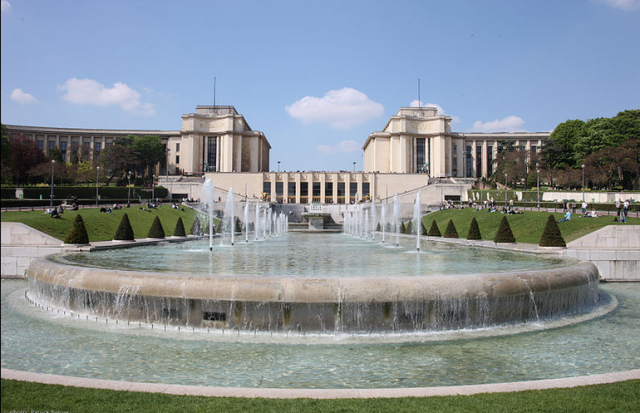 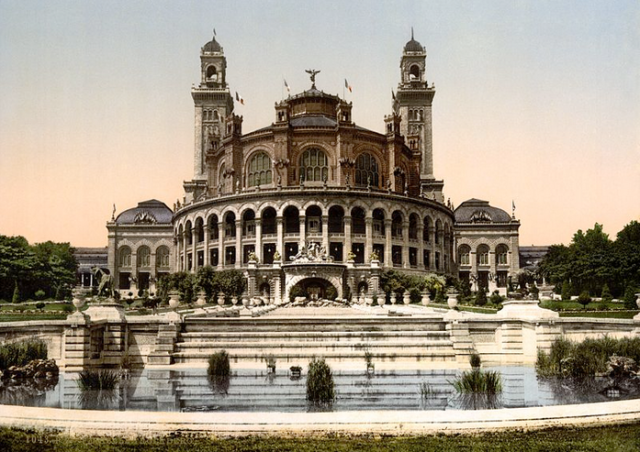 This blog was begun in 2009 as a feature of the Providence Journal, where I was on the editorial board and wrote a weekly column of architecture criticism for three decades. Architecture Here and There fights the style wars for classical architecture and against modern architecture, no holds barred. History Press asked me to write and in August 2017 published my first book, "Lost Providence." I am now writing my second book. My freelance writing on architecture and other topics addresses issues of design and culture locally and globally. I am a member of the board of the New England chapter of the Institute of Classical Architecture & Art, which bestowed an Arthur Ross Award on me in 2002. I work from Providence, R.I., where I live with my wife Victoria, my son Billy and our cat Gato. If you would like to employ my writing and editing to improve your work, please email me at my consultancy, dbrussat@gmail.com, or call 401.351.0457. Testimonial: "Your work is so wonderful - you now enter my mind and write what I would have written." - Nikos Salingaros, mathematician at the University of Texas, architectural theorist and author of many books.
View all posts by David Brussat →
This entry was posted in Architecture, Urbanism and planning and tagged Alistair Horne, Le Corbusier, Plan Voisin, Seven Ages of Paris, Trocadero. Bookmark the permalink.