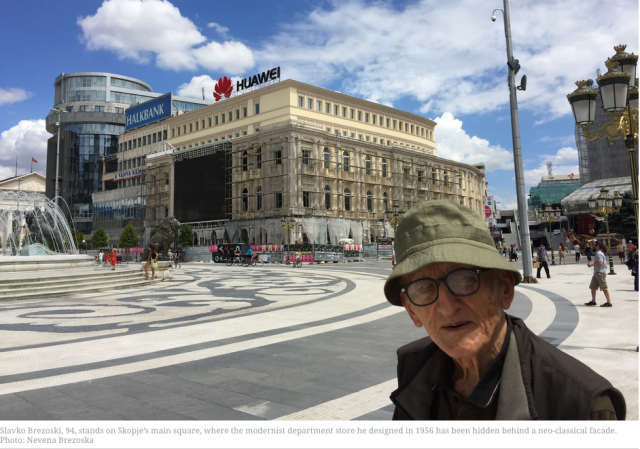 Architectural writers have had a field day criticizing Skopje for its classical makeover. Costly and often sloppy in the embellishment of Macedonia’s capital city, the new buildings feature a lot more enthusiasm than canonical scholarship. But the work is being done at the expense of the city’s modernist experiment following a 1963 quake. Under the post-communist government’s classical revival, façades in some cases literally cover up the Brutalism of the past. A third grader can see that whatever its flaws, the work done under a program known as Skopje 2014, announced in 2010, is more beautiful and engaging than what it displaces. So the modernists are heaving their brickbats with a vengeance.

Reader Russell Jenkins sent me “Architects of Modernist Skopje Decry Retrograde Model,” by Bojan Blazhevski, who wrote it for the Balkan Fellowship for Journalistic Excellence. So for its manifold absurdities I blame the writer, who should know better, more than the poor sods whom he interviewed – mostly aging modernists who worked long ago for the communist government of Yugoslavia and are now watching their life work slide into oblivion. That it is deserved merely makes them crankier.

For example, Blazhevski interviews Slavko Brezoski, the architect pictured in the photo above, one of whose buildings, erected in 1960 before the quake, is now being covered over with a new façade. The journalist writes:

It is one of dozens of buildings hidden or about to be hidden behind neo-classical facades and hollow colonnades in a radical makeover of the city called Skopje 2014, designed to resurrect antiquity and burnish a sense of national identity based on Macedonia’s claim to Alexander the Great. Now 94 years old, it pains Brezoski to see what has become of his work, worse still, he says, because he never gave his consent.

Consent!? When has it ever been the practice of developers or property owners (say, the government) to get consent from an architect to alter or demolish a building? What about the building that was there before Brezoski waltzed onto the Skopje stage? Was its designer, let alone its owner, asked for his “consent”? Hardly likely, with Josip Braz Tito in charge.

Another building being refaçaded under Skopje 2014 is what amounts to the center of government for the province Macedonia once was as part of Yugoslavia. It was built in 1971. Vladimir Kulic, a co-curator of an exhibit on Yugoslavian modernism scheduled to open at New York’s Museum of Modern Art in 2018, had some tart remarks for Blazhevski about its proposed new classical façades:

It is deeply ironic that a building that articulated a modern Macedonian identity through inspiration from local vernacular architecture was dressed up in a laughably illiterate version of international classicism precisely in an attempt to forge an alleged “Macedonianness.”

I lack the credentials to judge any attempt to reconnect Macedonia with its history. But Yugoslavia’s modernists benefited from modern architecture’s global effort to snuff out classical education and craftsmanship. It ill behooves them now to complain that the new classicism in Skopje is insufficiently canonical. Their hypocrisy beggars the imagination.

It is true that some proportions seem off and the Macedonian classicists don’t seem to realize that column capitals are supposed to stick out a bit from the architraves they uphold. I will not presume here to defend the orthodoxy of these buildings – which for all I know may well represent Macedonian classicism’s attempts at noncanonical experimentation, or some sort of architectural wit. Some classicists among my dear readers will want to slap them down, and argue that “bad trad” is a greater enemy of the classical revival than modern architecture. Yet Macedonia is one of the few nations seeking to undo the architectural atrocities committed against it – it hopes to comprehensively beautify its capital with classical architecture. At least they are trying to do the right thing. I say goodonya.

Below is what I assume to be the government building, criticized above, before its facelift, and below that is the same building as it will appear after its facelift. I may be wrong about the first image because the website I grabbed it from, which I believe portrays the design competition entries from which the public made its choice, was in the Macedonian (?) language and I could find no other photo of the government building. That was probably because it would only serve to weaken its own defense. Below that is the new museum of Macedonian archaeology. It is followed by a string of shots of major cultural facilities designed in the architectural styles that the citizens of Skopje are trying to get rid of.

Can you blame them one bit? 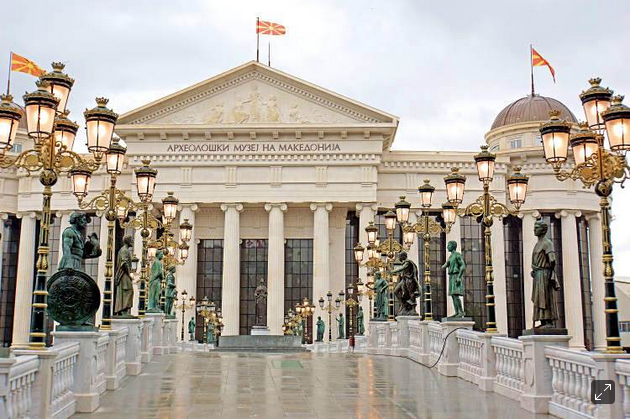 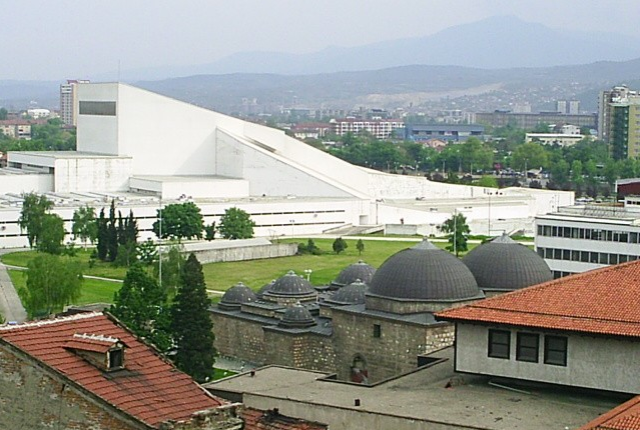 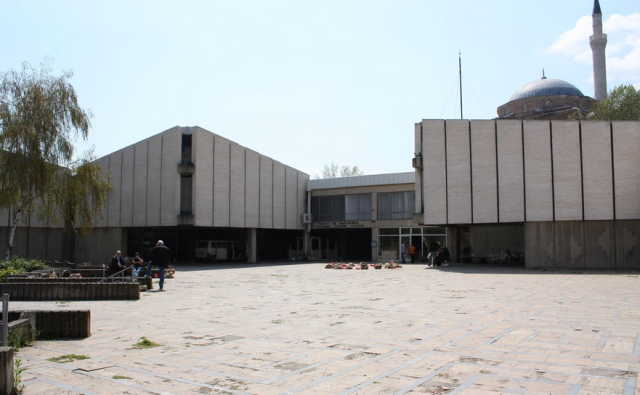 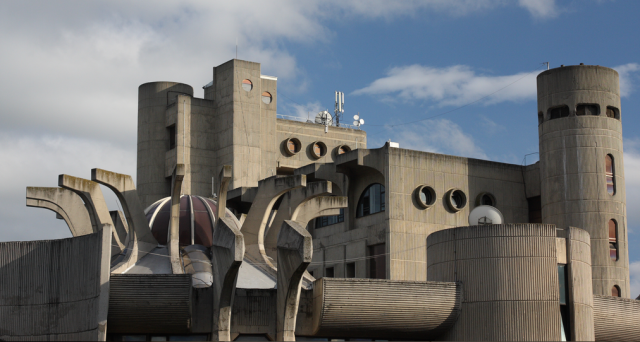 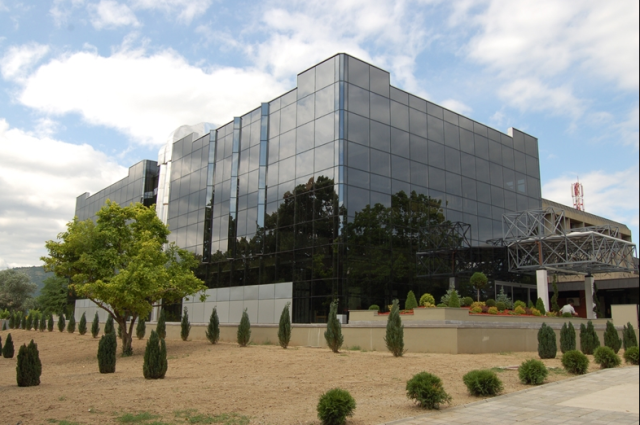 I rest my case.

This blog was begun in 2009 as a feature of the Providence Journal, where I was on the editorial board and wrote a weekly column of architecture criticism for three decades. Architecture Here and There fights the style wars for classical architecture and against modern architecture, no holds barred. History Press asked me to write and in August 2017 published my first book, "Lost Providence." I am now writing my second book. My freelance writing on architecture and other topics addresses issues of design and culture locally and globally. I am a member of the board of the New England chapter of the Institute of Classical Architecture & Art, which bestowed an Arthur Ross Award on me in 2002. I work from Providence, R.I., where I live with my wife Victoria, my son Billy and our cat Gato. If you would like to employ my writing and editing to improve your work, please email me at my consultancy, dbrussat@gmail.com, or call 401.351.0457. Testimonial: "Your work is so wonderful - you now enter my mind and write what I would have written." - Nikos Salingaros, mathematician at the University of Texas, architectural theorist and author of many books.
View all posts by David Brussat →
This entry was posted in Architecture and tagged Balkan Fellowship for Journalistic Excellence, Bojan Blazhevski, Macedonia, Museum of Modern Art, Russell Jenkins, Skopje, Skopje 2014, Slavko Brezoski, Tito, Yugoslavia. Bookmark the permalink.