A visit to East Greenwich 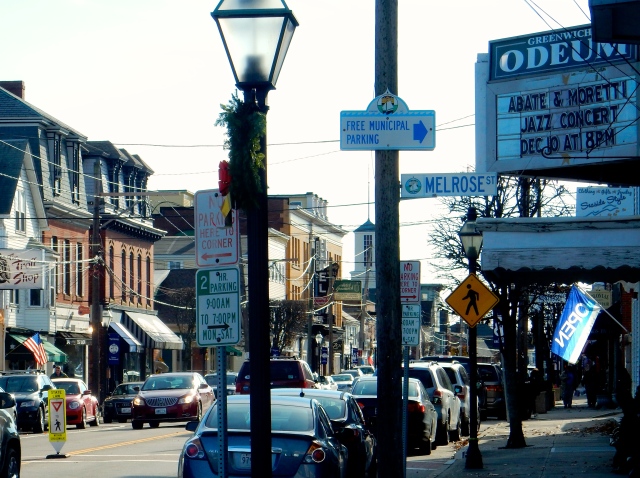 The other day I paid a brief visit to East Greenwich, one of Rhode Island’s most lovely towns. Main Street has long been a charming rendition of civic life, ever a pleasure to drive through or, better yet, stop and grab a bite or snoop for antiques. The buildings are mostly of an unassuming traditional vernacular, but with lots of architectural animation, not to mention here and there very fine buildings such as the courthouse, which used to be one of five rotating state houses, and the Beaux Arts post office, now a restaurant.

Recently, a string of minor improvements has extended the pleasure of this road. You see, if you are driving south on Main, after several blocks you get to a bend in the road near London Street. Historically, after this point, Main Street feels suburban. As soon as you round that bend you want to turn back.

Well, this did not happen on my last visit. I was actually pulled along by the feeling that it was not so bad around that bend anymore. It appeared as if several bland buildings had graced their facades and their sidewalks with more traditional features. There seemed to be a slew of new commercial buildings, some in curious but unequivocally historical styles. Maybe I don’t know East Greenwich well enough to specify this transformation, but it certainly did extend for several blocks the joy of a drive south on Main. And I did turn around and come back, heading north, and it was just as good in reverse. Then I turned back to head south yet again, just to make sure I was not deluding myself. And so far as I could tell, I was still in my right mind.

In various guises, this has happened elsewhere in Rhode Island. Over a decade or so, Barrington erected period lampposts and tweaked its zoning code, encouraging more tradition in the styles of its string of shopping plazas along County Road. Barrington as a result doesn’t seem as Borington as it used to. Even in North Providence, Mineral Spring Avenue has evolved in three decades through several generations of crudscape. Over time, its merchants and big-box stores have embraced more and more traditional elements in their cheesy architecture. Mineral Spring is still a deplorable heap, but it has indisputably become somewhat less unbearable.

Those are just two examples of what may be a good many more, just in Rhode Island. The point is that even minor changes pushing even the most desultory urbanism in the right direction can make a big difference. A lot of the changes, especially on Mineral Spring Avenue, would be greeted by rolling eyeballs from many of my favorite classicists, who consider bad classicism to be a worse enemy than modernism. But the proof that this is not so is probably more evident in stretches of American cityscape and – to again use the fabulous coinage of James Howard Kunstler – the crudscape of suburbia. Little traditional touches of even retrograde quality make a big difference in the charm – or if you must, the “charm” – of a street. Architects must try to remember that architecture is for all of the people, not just the clients, design magazine editors or other architects.

Yes, developers, merchants and others whose buildings decorate our cities and towns (for better or worse) should be encouraged to reach for the highest quality of design they can afford. Nevertheless, small and even dubious movement in the right direction, toward tradition, can make visible and positive differences on our streets, inching them toward the beauty that we all, as taxpayers and as human beings, deserve in our civic realm.

Somebody in the planning offices of East Greenwich seems to have discovered this hidden principle, and all of us, whether we live, work or visit in the town, are the beneficiaries.

This blog was begun in 2009 as a feature of the Providence Journal, where I was on the editorial board and wrote a weekly column of architecture criticism for three decades. Architecture Here and There fights the style wars for classical architecture and against modern architecture, no holds barred. History Press asked me to write and in August 2017 published my first book, "Lost Providence." I am now writing my second book. My freelance writing on architecture and other topics addresses issues of design and culture locally and globally. I am a member of the board of the New England chapter of the Institute of Classical Architecture & Art, which bestowed an Arthur Ross Award on me in 2002. I work from Providence, R.I., where I live with my wife Victoria, my son Billy and our cat Gato. If you would like to employ my writing and editing to improve your work, please email me at my consultancy, dbrussat@gmail.com, or call 401.351.0457. Testimonial: "Your work is so wonderful - you now enter my mind and write what I would have written." - Nikos Salingaros, mathematician at the University of Texas, architectural theorist and author of many books.
View all posts by David Brussat →
This entry was posted in Architecture, Urbanism and planning and tagged Barrington RI, Crudscape, Development, East Greenwich RI, James Howard Kunstler, North Providence RI, Rhode Island, Town Planning. Bookmark the permalink.

4 Responses to A visit to East Greenwich