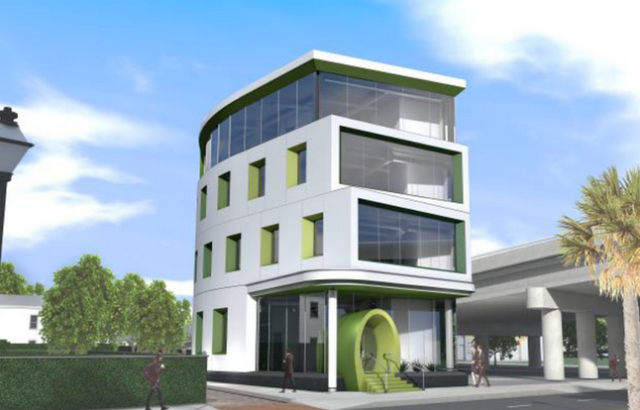 Charleston’s modernist wannabes have placed their dream of more modern architecture in the hands of a blog called “Buildings Are Cool.” It is written in a breezy style by a young architect named Steve Ramos, who in a recent post asks “Why Charleston Lacks Contemporary Architecture.”

Unfortunately, Ramos is incorrect to assert that so much contemporary architecture in Charleston may be characterized as timid. Much that is not timid was built several decades ago. Perhaps Ramos means so much recent contemporary architecture. Disrupting the beauty of old streets has become more difficult since the city’s recent battle over a proposed contemporary school of architecture for Clemson and recent reforms designed to bring the development process into better alignment with the laws protecting the city’s historical character. In the face of such sensible reforms, Ramos argues that architecture should be disruptive. Thankfully, Charlestonians have developed a shrinking patience for such shenanigans.

All are good reasons to avoid contemporary architecture, and they explain why, if you are a member of the city’s Board of Architectural Review, it is (to Ramos’s regret) “a lot easier just to say no.” He admits that “the people of Charleston love the beautiful historic context in which we live. We are lucky to live in such a special place.” What Ramos and many of his profession do not seem to realize is that people love the city precisely because it has so little contemporary architecture. For that reason, the BAR finds it “a lot easier to say no” for some very good reasons. (See reasons 1-4 above.) I believe that Ramos & Co. do realize why a majority of Charlestonians want to limit contemporary architecture. They just don’t want to admit it.

Ramos makes his case with reference to a proposed office building at 663 King St., designed by Neil Stevenson Architects, that took three trips to the BAR to be approved. Ramos believes this demonstrates all four reasons why contemporary architecture is difficult in Charleston. Reasons 1, 3 and 4 apply in obvious ways. Reason 4, which says that contemporary buildings are “hard to evaluate,” is a bit more elusive. With admirable candor, Ramos admits that he cannot tell which of the three versions shown at three meetings of the BAR is “superior.” Well, neither can I.

Maybe Design #1 is superior because it is more of a “true” contemporary building that better “reflects the spirit of the time.” Why? Because it looks more like it is about to collapse, more accurately reflecting the chaos of our era, with its four stories more discombobulated than #2 and #3. (Architects like Ramos and Stevenson long ago abandoned the idea that their profession should help solve society’s problems and now just strives to “reflect” them.) But is there a rule saying that to be a true contemporary building it must be even more ridiculous than the competition? I don’t think so!

Contemporary architecture is hard to evaluate because there are no reliable standards to guide judgment. Modern architecture is a century old and it still has not developed a language understandable to most people, apparently not even to trained architects like Ramos. Traditional architecture of the kind that makes Charleston lovable has evolved over successive generations of practitioners handing down best practices developed by trial and error over centuries. For half a century, architecture has been the only field of human endeavor whose establishment has embraced a professional philosophy that abjures precedent. There is no way to have a plausible rationale for judging the quality of design where no established standards prevail, and there is no standard language to express its quality or lack thereof. So there is no way to judge the superiority of the three versions of 663 King that is not based on pure unadulterated personal taste.

It’s no wonder that most people prefer traditional buildings over alternatives whose ethos favors innovation over the familiar. Human nature naturally resists instability. So it is depressing that Ramos cannot refrain from looking down his nose at Charlestonians. He writes:

True contemporary architecture has the tendency to be very abstract and sculptural.  It requires a very sophisticated eye to discern the good stuff.  It is definitely going to be a challenge for a volunteer board composed of two architects and three non-architects.

Like almost every other modernist, Ramos deludes himself as to the “sophistication” of his stylistic preference. He and they misunderstand genuine creativity, believing it to be that which achieves design as different as possible from previous designs. In fact, true creativity is the discovery of new methods for achieving greater virtuosity in the conventional production of beauty – a new form of brush stroke in painting, a new form of fingering a bassoon, a new form of turning a corner in a colonnade. Having abolished most of the tools for the making of beauty, modern architects have limited themselves to a palette that forces them to embrace the creative gestures of larger scale, with rapidly diminishing returns that lead to more and more ridiculous design conceits, inevitably emphasizing shock value over beauty. Indeed, the calendar of architectural scholarship is chock-a-block with panels and symposia where practitioners and theorists exercise their reluctance to discuss beauty. Architectural scholars have been scratching their heads for decades. By now, modern architecture is best described as a cult. It takes an education in architecture school to design a school of architecture as far out of character for Charleston as the one proposed by Clemson and wisely rejected by the citizens of that fair city.

It is understandable that Charlestonians are reluctant to embrace design strategies that will inevitably undermine the beauty of their city. They reject those strategies because they have watched the ugliness creep in for over half a century. They say no not because it is easier to say no but because it makes more sense to say no.

To conclude, here’s some good news from “Buildings Are Cool”: Note the careful use by Ramos of the phrase “contemporary architecture.” He avoids the phrase “modern architecture” like the plague. Obviously, he fears that readers will cringe if he uses the more conventional phrase. That’s progress! Maybe modernism’s kidnapping of the word modern is not working after all. 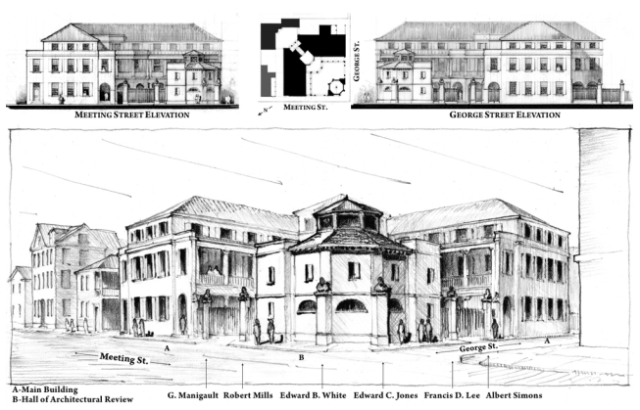 This blog was begun in 2009 as a feature of the Providence Journal, where I was on the editorial board and wrote a weekly column of architecture criticism for three decades. Architecture Here and There fights the style wars for classical architecture and against modern architecture, no holds barred. History Press asked me to write and in August 2017 published my first book, "Lost Providence." I am now writing my second book. My freelance writing on architecture and other topics addresses issues of design and culture locally and globally. I am a member of the board of the New England chapter of the Institute of Classical Architecture & Art, which bestowed an Arthur Ross Award on me in 2002. I work from Providence, R.I., where I live with my wife Victoria, my son Billy and our cat Gato. If you would like to employ my writing and editing to improve your work, please email me at my consultancy, dbrussat@gmail.com, or call 401.351.0457. Testimonial: "Your work is so wonderful - you now enter my mind and write what I would have written." - Nikos Salingaros, mathematician at the University of Texas, architectural theorist and author of many books.
View all posts by David Brussat →
This entry was posted in Architecture and tagged Board of Architectural Review, Buildings Are Cool, Charleston SC, Clemson University, Steve Ramos. Bookmark the permalink.