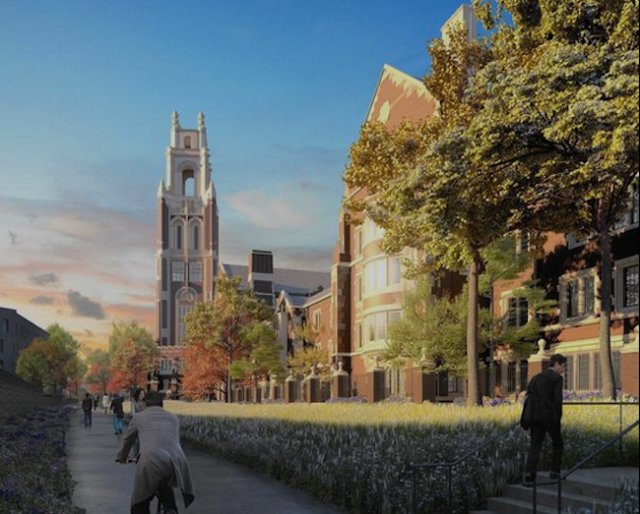 Rendering of new residential colleges under construction at Yale. (RAMSA)

Hartford Courant architecture critic Duo Dickinson has written a fine piece on Yale’s two new residential colleges, under construction in New Haven. Yale’s expenditure of more than half a billion (b) to recapture the work of architect James Gamble Rogers’s eight pre-WWII colleges speaks well of the university’s public spirit, and adds to hopes that beauty is no longer verboten on the Yale campus or, for that matter, among the elite of the nation’s elite.

The work is of course by Robert A.M. Stern Architects, probably the world’s largest firm doing classical architecture. Stern himself recently stepped down as Yale’s dean of architecture, though one hopes that’s not exclusively the reason he got the job (RAMSA also does more than its share of modernist work). Dickinson seems to have spoken with Stern at some length, and with satisfying results. These are Yale’s first new colleges in half a century, making room for 800 more Yale students each year.

Though “Yale’s Edifice Complex: University Is Building a Modern History for its Future” contains an item or two of the obligatory architecture-critic snickers at revivalist classicism (the buildings are Collegiate Gothic), it is remarkable how straightforward it is in its admiration for this major project at Yale. Here is how he describes the design of the colleges’ exteriors:

The exteriors are equally sumptuous. The carefully scaled and shaped facades have hundreds of carved appointments and the kind of crafted stone and brick detailing that is unprecedented on this scale in any other facility built in this era. The landscaping lives up to the intricately burnished exteriors with generous plantings and trees.

Snicker though they may, university know-it-alls will someday come to realize that the donations their institutions receive from alumni ($250 million from alum Charles Johnson, the financier, toward the cost of these new colleges) will be generated by the feelings accrued over four years of study (and play) in what were once commonly called “these hallow’d halls.” They are rarely such memorable edifices anymore, and those colleges that understand the implications will go with the flow. Nobody ever accused Yale of stupidity.

Here is a RAMSA video of the plans for the two colleges that show the luxuriousness that Dickinson describes in splendid detail.

This blog was begun in 2009 as a feature of the Providence Journal, where I was on the editorial board and wrote a weekly column of architecture criticism for three decades. Architecture Here and There fights the style wars for classical architecture and against modern architecture, no holds barred. History Press asked me to write and in August 2017 published my first book, "Lost Providence." I am now writing my second book. My freelance writing on architecture and other topics addresses issues of design and culture locally and globally. I am a member of the board of the New England chapter of the Institute of Classical Architecture & Art, which bestowed an Arthur Ross Award on me in 2002. I work from Providence, R.I., where I live with my wife Victoria, my son Billy and our cat Gato. If you would like to employ my writing and editing to improve your work, please email me at my consultancy, dbrussat@gmail.com, or call 401.351.0457. Testimonial: "Your work is so wonderful - you now enter my mind and write what I would have written." - Nikos Salingaros, mathematician at the University of Texas, architectural theorist and author of many books.
View all posts by David Brussat →
This entry was posted in Architecture and tagged Alumni Donations, Duo Dickinson, James Gamble Rogers, New Haven, Robert A.M. Stern, Yale. Bookmark the permalink.