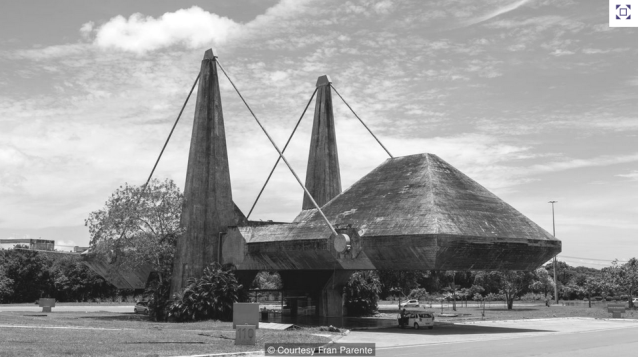 Contradiction in terms? Not to architecture critic Jonathan Glancey; still less, one must assume, to Peter Chadwick, who has devoted an entire book, This Brutal World, from which Glancey has selected his favorites in “Ten beautiful Brutalist buildings” for the BBC. For chiefly rhetorical reasons, Brutalism is my favorite modernist subgenre – its name comes from béton brut, which is French for raw or rough concrete but means much more in the real world where people make mental connections, usually based on their obvious first impressions. For that reason, I commend Chadwick for the title of his book.

I had a tough time choosing the photo atop this post. I chose the one whose thumb stuck out most sorely as an example of Brutalism – stuck out because although the other nine are ugly in and of themselves, this one seems to be the dictionary definition of what people might mean when they speak of a modernist building as “an alien spaceship.” Of course, the text accompanying the image of the 1974 exhibition center in Brazil pretends not to notice that it looks like an alien spaceship. I think that is hilarious, but perhaps by 1974 modernists had completely lost the ability to imagine what everyday people think of their work. (I would not want to be the guy under the overhang getting into his car.)

Glancey’s selection is fascinating. The one above the alien spaceship is London’s Trellick Tower, a 31-story hulk built in 1972 and designed by the Hungarian emigré Ernö Goldfinger. Glancey does mention that Goldfinger “lent his name” to a James Bond villain – an interesting choice of words – but not that the reason was that Ian Fleming chose the name to express what is widely believed to be his deep dislike for Goldfinger’s work.

Farther down there is the Hemeroscopium House, in Madrid, that seems to be a study in I-beams and girders writ large. This certainly cannot be defended as an example of a modernist building designed to express its structural philosophy. It was built recently, in 2008, long after most modernists had dropped any pretense to “honesty” in design. (It was a ridiculous pretense, anyway. One would like to think dropping it constituted a shift toward reason if not beauty in design. Not likely.)

Boston City Hall, which the last mayor wanted to demolish but wimped out, is on the list, naturally, and so is the Orange County Municipal Center, in Goshen, N.Y., whose citizens wanted to demolish but only partly got their wish – enough, however, that modernists and preservationists abed with modernists boo-hoo’d loudly around the world. I wonder why a building that no longer exists in its pristine form (if you can call it that) got on the list.

Hats off to Kristen Richards for putting this romp on ArchNewsNow.com, her vital global roundup of architecture news and views (in English). 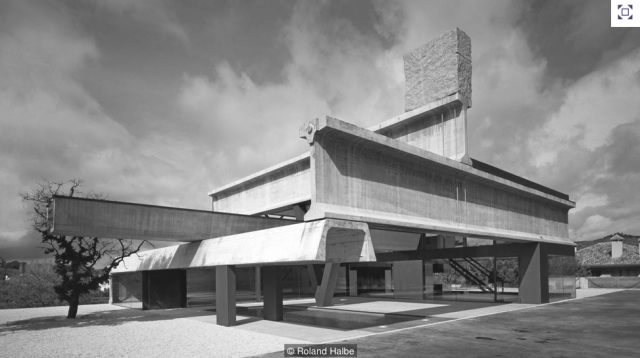 This blog was begun in 2009 as a feature of the Providence Journal, where I was on the editorial board and wrote a weekly column of architecture criticism for three decades. Architecture Here and There fights the style wars for classical architecture and against modern architecture, no holds barred. History Press asked me to write and in August 2017 published my first book, "Lost Providence." I am now writing my second book. My freelance writing on architecture and other topics addresses issues of design and culture locally and globally. I am a member of the board of the New England chapter of the Institute of Classical Architecture & Art, which bestowed an Arthur Ross Award on me in 2002. I work from Providence, R.I., where I live with my wife Victoria, my son Billy and our cat Gato. If you would like to employ my writing and editing to improve your work, please email me at my consultancy, dbrussat@gmail.com, or call 401.351.0457. Testimonial: "Your work is so wonderful - you now enter my mind and write what I would have written." - Nikos Salingaros, mathematician at the University of Texas, architectural theorist and author of many books.
View all posts by David Brussat →
This entry was posted in Architecture, Architecture History, Uncategorized and tagged BBC, Brutalism, Erno Goldfinger, Jonathan Glancy, Peter Chadwick, This Brutal World. Bookmark the permalink.