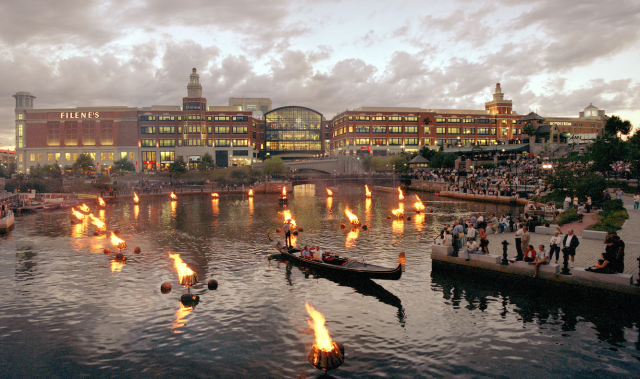 Providence Place in 2000. (Fragment of photo by Richard Benjamin)

Providence’s downtown mall is getting its first big renovations since it opened in 1999. So said the Providence Journal on Sunday in “Providence Place mall in line for first major overhaul .” J.C. Penney shut its doors last year, lasting a surprising nine years after Lord & Taylor closed in 2006. Both were tucked into a large but awkward rear location well off of the concourses of the mall’s three shopping levels. Neither seemed to attract much foot traffic. Far from the madding crowd is less than prime for anchor stores.

WPRO asked listeners in January 2015 what they wanted to see replace Penney’s. They wanted a Target, Bloomingdale’s, Best Buy, Nieman Marcus, Toys ‘R’ Us, even an Ikea and a few other big stores, but not a bookstore. Oh yeah? The mall became uninteresting to a sizable segment of the market when Border’s closed in 2011. The mall management made a mistake not moving heaven and earth to grab a Barnes & Noble. Instead, another shoe store has bored shoppers. Yet another shoe store. Unbelievable.

So it would not have been a shock to learn of plans to shoehorn another dozen shoe stores into the Penney’s square footage. (After all, Providence is a walkable city, and while that’s good for the soul it’s bad for the soles.)

So imagine my surprise when I heard that the mall now plans to lease two of the three old Penney’s floors to … more cars! Yes, more parking in a place with abundant parking. It is fashionable to hate the parking at the mall. Not me. Unless you are a mall garage newbie, it is easy and cheap to park there – getting out is another story. The current plan includes renovations to the entire parking system, and I hope that includes simplifying the way outta there. It has always been a confusing exercise in spaghetti. The plan also includes more (but hopefully not worse) machines for paying in the mall shopping areas. Not to mention more (and, one must hope, better) greenery and maintenance outside.

I do not believe they need more parking, but they may not have been able to find stores to to take the Penney’s space, and they still have not revealed plans for the remaining floor – probably because there is no plan.

I say bookstore. Barnes & Noble remains a possibility, at least in theory. We Rhode Islanders must drive to Seekonk, Greenville or, worse, Route 2 in Warwick or deepest, darkest Middletown to get to a major bookstore from the capital city. That is embarrassing. I may have to burn my low-number Athenaeum share, No. 41, originally owned by Resolved Waterman and deeded to me by Tony “Spy in the Sky” DiBiasio decades ago.

So here are my recommendations:

He suggested Providence Place might consider adding multi-family housing, a limited-service hotel or even office space, an approach taken by one of Metro Detroit’s largest malls, where Ford Motor Co. plans to help convert an old Lord & Taylor department store into work space for about 2,100 employees.

The mall has been a major shopping success on the basis of sales per square foot since shortly after it opened. It has brought millions of people into Providence – if not into the city’s old commercial district, though there was never a good case that not building the mall would have helped much to animate Downcity. Buff Chace has done an excellent job of that so far, but he’s done almost all the heavy lifting – lofts, retail, food – by himself. More people doing more of that would have brought downtown even more alive.

And by the way, except for the state’s historic tax credit program, never has a set of tax breaks helped the city and state more than the Tax Treaty between the city, the state and the mall’s first owner, Dan Lugosch of the Providence Place Group. I recall doing a 12-part series on the mall’s design back in the mid- to late-1990s. Some of my colleagues at the Journal joshed me that it should be named Brussat Place. Ah! Those were the days!

This blog was begun in 2009 as a feature of the Providence Journal, where I was on the editorial board and wrote a weekly column of architecture criticism for three decades. Architecture Here and There fights the style wars for classical architecture and against modern architecture, no holds barred. History Press asked me to write and in August 2017 published my first book, "Lost Providence." I am now writing my second book. My freelance writing on architecture and other topics addresses issues of design and culture locally and globally. I am a member of the board of the New England chapter of the Institute of Classical Architecture & Art, which bestowed an Arthur Ross Award on me in 2002. I work from Providence, R.I., where I live with my wife Victoria, my son Billy and our cat Gato. If you would like to employ my writing and editing to improve your work, please email me at my consultancy, dbrussat@gmail.com, or call 401.351.0457. Testimonial: "Your work is so wonderful - you now enter my mind and write what I would have written." - Nikos Salingaros, mathematician at the University of Texas, architectural theorist and author of many books.
View all posts by David Brussat →
This entry was posted in Development and tagged Bookstores, JC Penney, Parking, Providence Place, Tony DiBiasio, WPRO. Bookmark the permalink.

2 Responses to Tinker at Providence Place