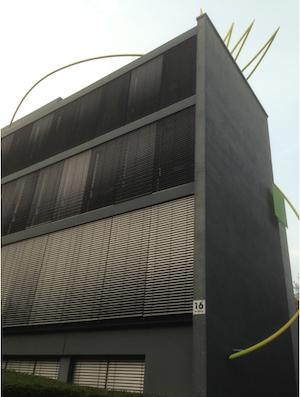 My brother, his wife Sabrina and her two sons stayed a stretch in Germany for treatment of the two sons’ Lyme disease – successful treatment, by the way. They were in Stuttgart when Tony, a noted philosopher of the mind/body/nature continuum, had the following thought, which he passed along to his brother:

It occurred to me, while looking at this building in Stuttgart, what a feeble attempt this little ornament was, to distract us from such a sterile monstrosity. Walking further in this same neighborhood, I remarked that the apartment buildings were unattractive – cement high-rises with random-looking balconies. … I had a political epiphany.

To keep people from gathering, fraternizing, plotting, such buildings keep people inside, apart, and weak. But the internet, Facebook, Twitter, and all that, turns it literally inside-out. So it occurred to me that a traditional revival, along the lines that you dream of – inspiring people to be outside – might find political support simply because it keeps people from their computers. As well, a riotous mob might be less inclined to destroy a cityscape that they find lovable.

Anyway, I thought you might get a kick out of these musings.

Tony, you may be onto something. Being surrounded by beauty while rallying to support beauty might be helpful. Whatever the issue at hand, beautiful buildings generate political support, providing incentive to gather as folks rally to their beliefs instead of staying inside to gaze at their screens. Who wants to destroy a lovely environment? Citizens of Paris and Stuttgart might not have minded in 1848, as they knew a damaged building would be repaired or rebuilt in an equally lovely way. Today, who cares, since so many buildings are so ugly? People stay inside to avoid the inevitable angst of the built environment outdoors. But if they go outside, they may bring their screens along – but at least they will be able to see and join the multitudes who receive their texts.

This blog was begun in 2009 as a feature of the Providence Journal, where I was on the editorial board and wrote a weekly column of architecture criticism for three decades. Architecture Here and There fights the style wars for classical architecture and against modern architecture, no holds barred. History Press asked me to write and in August 2017 published my first book, "Lost Providence." I am now writing my second book. My freelance writing on architecture and other topics addresses issues of design and culture locally and globally. I am a member of the board of the New England chapter of the Institute of Classical Architecture & Art, which bestowed an Arthur Ross Award on me in 2002. I work from Providence, R.I., where I live with my wife Victoria, my son Billy and our cat Gato. If you would like to employ my writing and editing to improve your work, please email me at my consultancy, dbrussat@gmail.com, or call 401.351.0457. Testimonial: "Your work is so wonderful - you now enter my mind and write what I would have written." - Nikos Salingaros, mathematician at the University of Texas, architectural theorist and author of many books.
View all posts by David Brussat →
This entry was posted in Architecture, Architecture Education, Architecture History, Art and design, Other countries, Urbanism and planning and tagged Activism, Cities, Computers, Facebook, Germany, Politics, Social Media, Social Studies, Stuttgart, Tony Brussat, Twitter, Urban Planning. Bookmark the permalink.

2 Responses to Epiphany in Stuttgart