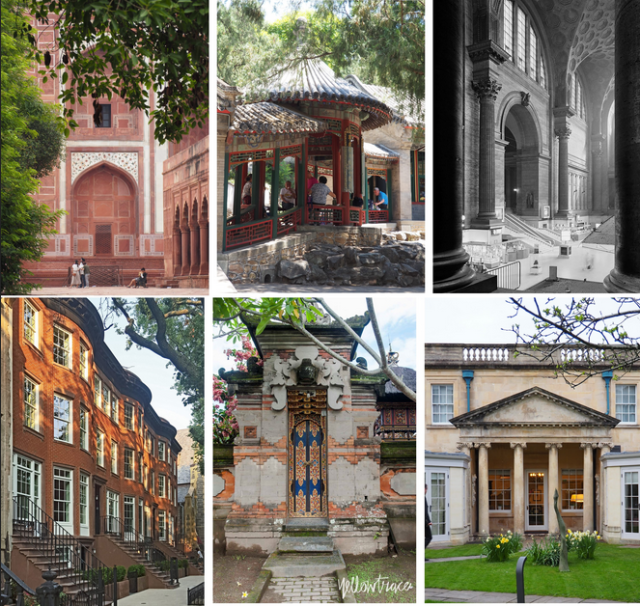 Six examples of traditional architectural design from around the world that incorporate an intuitive understanding of multiple fractals. (Classical Planning Institute)

Without thinking much about it, most people prefer traditional architecture. Now it seems as if more detailed and ornamental styles of design for buildings and cities are not only more popular but more natural and more healthy. A new study of studies in the Urban Science Journal concludes that:

[W]e perceive urban space the same way as our ancestors perceived the landscape of our emergence, the African savannah. With significant implications for the design of cities based on our perception of streetscapes, the authors conclude that, in order to promote wellbeing, we should design streetscapes to “please” our brain.

The authors of the article in Urban Science Journal – neurobiologist Aenne Brielmann, architect/planner Nir Buras, mathematician Nikos Salingaros and physicist Richard Taylor – focus on the role of “multiple fractals”: patterns that self-repeat at different scales both in nature and in the built environment. This phenomenon of nature, when it is absent from architecture, starves the brain as it perceives streetscapes.

“What happens in your brain as you walk down the street?” ask the authors, who point to multiple studies to explain the answer. The Classic Planning Institute’s press release about the study explains it more concisely, and offers a link to the study of studies itself.

The insights that arise from the four authors’ summary are not quite new, but their role in contradicting what most architects and city planners have believed for a century could, if embraced, enable urbanists to design streets and buildings that “foster well-being, with such striking benefits as high as a 60% reduction in observers’ stress and mental fatigue.”

Fractals are the key to understanding why human beings are drawn to buildings and cities of ordered complexity arising from traditional architecture and urban patterns. For many centuries, all architecture featured detail of greater or lesser complexity. Architecture advanced by trial and error through generations of builders and designers. A century ago, tradition was increasingly challenged by new styles, dubbed “modern,” that downplayed detail and ornament in favor of a supposed utility expressed by the metaphor of machinery, with novelty more often trumping utility in prioritizing architectural development.

Indeed, popular resistance to styles based on the machine metaphor tends to undermine its utility. If people do not love a building, if they do not love where they live and work in a city, they will not provide for its repair and upkeep.

Recent research in neurobiology, tracing how the brain processes visual data back to the early development of human perception millennia ago, has advanced the knowledge of fractals and deepened our understanding of their role in how we feel about what our eyes tell us of our manmade surroundings.

Based on the makeup of the human brain, the authors sequence and characterize the earliest stages of visual processing. Laying this perceptual foundation validates the common urban experience we all share – places most people recognize as beautiful – or ugly. The perception of multiple fractals – a fundamental human characteristic – is among the first things to be processed, within 50 milliseconds.

Intuitive understanding of cities and buildings, and of how tradition regenerates patterns of design conducive to human nature, has long proved stronger than the pseudoscientific explanations modernists give for why modern architecture is the correct approach for modern times. But in modern times ancient wisdom often requires scientific backing. Without it, the quality of our built environment and the pursuit of a more humane existence will continue to be a matter of power rather than of truth. This is why the article by Brielmann, Buras, Salingaros, and Taylor is such a vital contribution to architectural discourse.

This blog was begun in 2009 as a feature of the Providence Journal, where I was on the editorial board and wrote a weekly column of architecture criticism for three decades. Architecture Here and There fights the style wars for classical architecture and against modern architecture, no holds barred. History Press asked me to write and in August 2017 published my first book, "Lost Providence." I am now writing my second book. My freelance writing on architecture and other topics addresses issues of design and culture locally and globally. I am a member of the board of the New England chapter of the Institute of Classical Architecture & Art, which bestowed an Arthur Ross Award on me in 2002. I work from Providence, R.I., where I live with my wife Victoria, my son Billy and our cat Gato. If you would like to employ my writing and editing to improve your work, please email me at my consultancy, dbrussat@gmail.com, or call 401.351.0457. Testimonial: "Your work is so wonderful - you now enter my mind and write what I would have written." - Nikos Salingaros, mathematician at the University of Texas, architectural theorist and author of many books.
View all posts by David Brussat →
This entry was posted in Architecture and tagged Aenne Brielmann, Classic Planning Institute, Fractals, Neurobiology, Nikos Salingaros, Nir Buras, Richard Taylor, Urban Science Journal. Bookmark the permalink.