Up Fifth Avenue in early ’30s 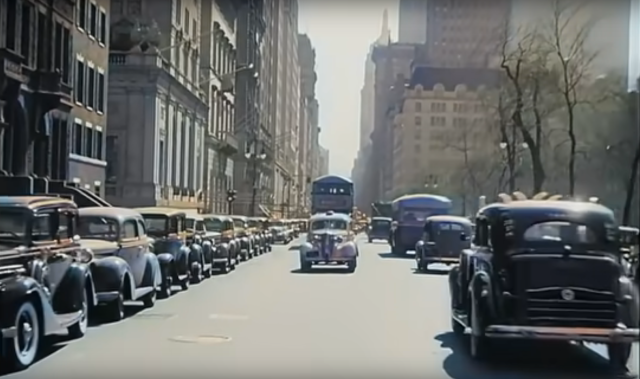 Stumbled upon this delightfully informative, well-paced, almost soporific film of Fifth Avenue, taken from the rear window of a motorcar (if they still used that word in the 1930s), at a steady pace except for stops at traffic lights. You’ll almost nod off at the gentle pleasure, grace and repetitiveness of the architecture of the buildings along the avenue, opposite Central Park. Thrill at the elegance of the street lamps, at the absence of “signage,” traffic lights and at the various makes of automobile. At first the camera takes in both sides of the street – for a while you can see the new Empire State Building in the distance – then the camera focuses on the buildings on the east side of the street. Toward the end, Central Park itself takes center stage. The season is spring, with the trees newly abud, seemingly in early afternoon, though it seems to shift with different takes. You can see the “towers” of Central Park South dimly off in the distance.

A time travel in New York 1930s. We can clearly see what is happening in broad daylight, I believe it starts at 51st Street and rides along Fifth Avenue for the rest, right next to Central Park.

This blog was begun in 2009 as a feature of the Providence Journal, where I was on the editorial board and wrote a weekly column of architecture criticism for three decades. Architecture Here and There fights the style wars for classical architecture and against modern architecture, no holds barred. History Press asked me to write and in August 2017 published my first book, "Lost Providence." I am now writing my second book. My freelance writing on architecture and other topics addresses issues of design and culture locally and globally. I am a member of the board of the New England chapter of the Institute of Classical Architecture & Art, which bestowed an Arthur Ross Award on me in 2002. I work from Providence, R.I., where I live with my wife Victoria, my son Billy and our cat Gato. If you would like to employ my writing and editing to improve your work, please email me at my consultancy, dbrussat@gmail.com, or call 401.351.0457. Testimonial: "Your work is so wonderful - you now enter my mind and write what I would have written." - Nikos Salingaros, mathematician at the University of Texas, architectural theorist and author of many books.
View all posts by David Brussat →
This entry was posted in Architecture, Video and tagged Central Park, Central Park South, Fifth Avenue, New York City, Video. Bookmark the permalink.

4 Responses to Up Fifth Avenue in early ’30s