Tall buildings all fall down 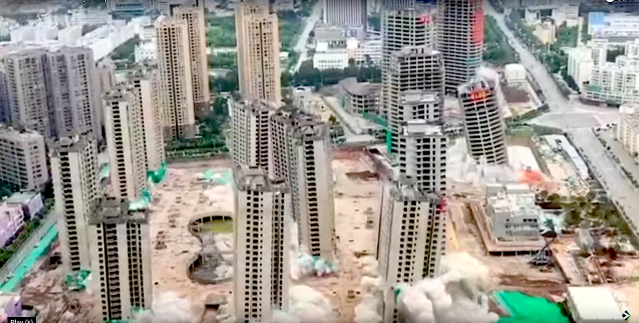 Fifteen buildings of in Yunnan, China, were imploded on Aug. 27. (Taiwan News)

Is there something off-kilter about the photo above from a video sent to me yesterday by architectural theorist Nikos Salingaros? Yes, there is.

At first I thought it was a video of Pruitt-Igoe, the St. Louis public housing project, all 33 eleven-story buildings of which were demolished in between 1972 and 1976 – an event described (falsely, alas) as “the end of modern architecture” by postmodernist architectural historian Charles Jencks. Interesting factoid: the 33 buildings were designed by Minoru Yamasaki, better known for his twin World Trade Center towers, infamously demolished on Sept. 11, 2001, by the terrorist group al-Qaeda. The demolition of Pruitt-Igoe was memorialized in about nine minutes of the 1982 film Koyaanisqatsi: Life Out of Balance.

A moment’s reflection concluded my delusion. In fact, the photograph above from early in the video at this link records the demolition of the Liyang Star City Phase II project in the Chinese city of Kunming. Note the tilt of several buildings at the start of their demolition last Friday. The dynamite expunged $154 million worth of property in 45 seconds. Some 5,300 people in 2,000 units were evacuated (before demolition, one trusts). The 15 buildings were allegedly demolished because, in the opinion of the Chinese authorities, the eight years since the beginning of construction was too long. How many buildings were occupied and why they were among those torn down was not explained. In other words, this information must be consumed with a very large pinch of salt.

Another video of the demolition gives a much clearer idea of its context as a minor dent in the skyscraperopolis that is Kunming, the capital of Yunnan province. I am not quite as confirmed an opponent of skyscrapers as my friend Nikos, who sent me the video in the hope that I might find it interesting. He was correct. And most skyscrapers are an ecological abomination, needing too much energy to build and operate without housing enough people to justify their carbon footprint. Paris with its gorgeous Haussmanesque flats of seven stories or so has an equivalent density using architecture of much greater sustainability. I suppose I’d have applauded the assassination of this group of skyscrapers in China even if they had all looked like the Woolworth Building (1913) in Manhattan. What a mockery of beauty that would have been!

The Chinese are known for the number of neighborhoods and even whole cities that have been built but are not yet occupied. No doubt the progression from legal one-child families to two- and now three-child families since 2016 plays a role. Those empty population centers have not been torn down. Could that be because some are knock-offs of European architecture and hence popular?

Chinese President Xi has banned “weird” architecture in China, and cited the CCTV tower (which looks like it is crushing the people) and the People’s Daily headquarters (which looks like a penis), both in Beijing. But the skyscrapers demolished in Yunnan are not weird or lewd but dull. On the other hand, Xi has also banned “copycat” architecture, such as, presumably, neighborhoods inspired by European architecture, which perhaps qualify as weird copycats. They are not all built with equal architectural verismilitude, to say the least. What about all those other cities filled with tedious towers, throughout Asia, Europe and the Americas? Are those not copycat buildings? Don’t hold your breath waiting for an answer. Pop go the overinflated egos! Meanwhile, Olympic construction in China has obliterated traditional hutong neighborhoods that go back many centuries, and possibly other examples of Chinese heritage whose demise remains unknown to the public. Shame!

It seems to me that the entire city of Yunnan should be demolished. But what good would that do? Chinese skyscrapers and Chinese power plants resemble each other in that so many are being built that, however many are torn down, they still swamp all efforts to put a lid on the globe’s carbon footprint. Too bad! I will continue to oppose ugly modernist towers and support the construction of beautiful new classical towers, however rare they may be. I suppose I can count them on the fingers of no more than a pair of hands. No fear of their interfering with the war on climate change. Again: Too bad. 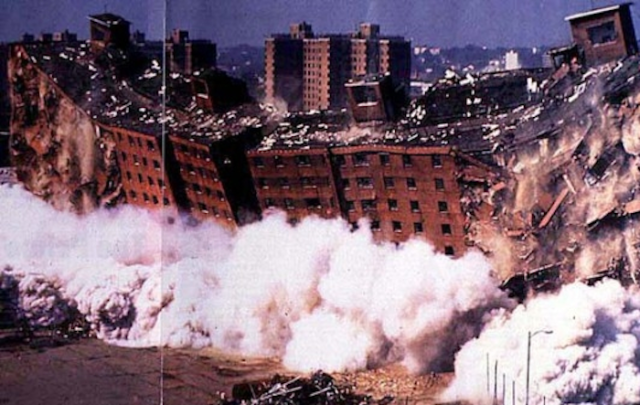 This blog was begun in 2009 as a feature of the Providence Journal, where I was on the editorial board and wrote a weekly column of architecture criticism for three decades. Architecture Here and There fights the style wars for classical architecture and against modern architecture, no holds barred. History Press asked me to write and in August 2017 published my first book, "Lost Providence." I am now writing my second book. My freelance writing on architecture and other topics addresses issues of design and culture locally and globally. I am a member of the board of the New England chapter of the Institute of Classical Architecture & Art, which bestowed an Arthur Ross Award on me in 2002. I work from Providence, R.I., where I live with my wife Victoria, my son Billy and our cat Gato. If you would like to employ my writing and editing to improve your work, please email me at my consultancy, dbrussat@gmail.com, or call 401.351.0457. Testimonial: "Your work is so wonderful - you now enter my mind and write what I would have written." - Nikos Salingaros, mathematician at the University of Texas, architectural theorist and author of many books.
View all posts by David Brussat →
This entry was posted in Architecture, Video and tagged Carbon Footprint, China, Christopher Jencks, Demolition, Minoru Yamasaki, Paris, President Xi, Skyscrapers, Yunnan. Bookmark the permalink.

3 Responses to Tall buildings all fall down