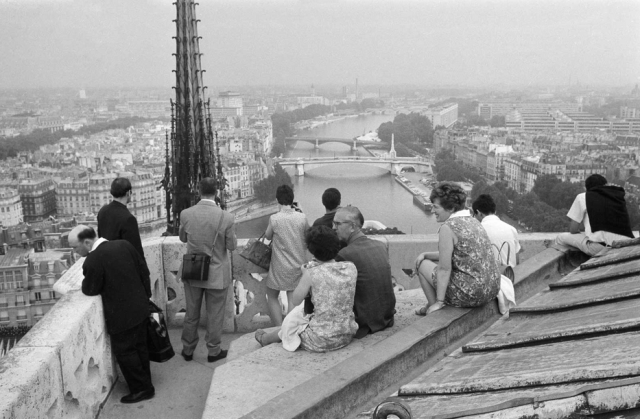 View from the south tower of Notre-Dame in 1968. (travelandleisure.com)

The lost spire of Notre-Dame must be rebuilt, but how? An international design competition has been announced to decide how to rebuild it, whether as it was or as “adapted to techniques and challenges of our times.” These last are ominous words. I am confident that France will do what it ought, and build a faithful restoration. But that’s far from certain.

What would Voillet-le-Duc do? The French architect Eugène Emmanuel Voillet-le-Duc (1814-1879) is the world’s most famous expert in architectural restoration. He restored Notre-Dame from the extensive damage during the French Revolution. He even restored the spire, or the flèche (arrow), which was damaged by wind, removed in 1786, and rebuilt by Viollet-le-Duc in 1859. But he did not replicate the original spire.

This fact has sustained a long debate over the nature of building restoration.

Drawing of the spire by Eugene Voillet-le-Duc.

Charles Garnier, whose design for the Opéra de Paris (Palace Garnier) was selected over the well-placed Voillet-de-Duc, wrote of his disgruntled rival: “He is broken by archeology and crushed by the weight of the past. If it is difficult to learn, it is even more difficult to forget.”

You’d think that Garnier’s complaint against Voillet-le-Duc is in his definition of restoration as replication. But not so fast. Here is a description (via Wikipedia) of his restoration of the spire:

Viollet-le-Duc’s restorations sometimes involved non-historical additions, either to assure the stability of the building, or sometimes simply to maintain the harmony of the design. The flèche, or spire of Notre-Dame de Paris, which had been constructed in about 1250, was removed in 1786 after it was damaged by the wind. Viollet-le-Duc designed and constructed a new spire, which, ornamented with statuary, was taller than the original and modified to resist the weather, but in harmony with the rest of the design.

This seems reasonable to me, so why the virulence of the debate largely inspired by the perception that he, in his restorations, does not sufficiently respect the original? It probably has to do with Viollet-le-Duc’s strong preference for Gothic over classical styles. In fact, much of his restoration of Notre-Dame involved his replacement of classical renovations overseen by Napoleon decades earlier after he took control of revolutionary France. Voillet-le-Duc booted elements of the emperor’s classicized cathedral, replacing them with Gothic elements. His opponents went ballistic:

In 1846 [Voillet-le-Duc] engaged in a fervent exchange in print with Quatremère de Quincy, the Perpetual Secretary of the French Academy, on the question, “Is it suitable, in the 19th century, to build churches in the gothic style?” De Quincy and his followers denounced the gothic style as incoherent, disorderly, unintelligent, decadent and without taste. Viollet-le-Duc responded, “What we want, messieurs, is the return of an art which was born in our country. … Leave to Rome what belongs to Rome, and to Athens what belongs to Athens. Rome didn’t want our Gothic (and was perhaps the only one in Europe to reject it) and they were right, because when one has the good fortune to possess a national architecture, the best thing is to keep it.”

Today’s modernists are salivating at the prospect of using the words of Voillet-le-Duc to buttress a claim that his spirit may be respected only by rebuilding the spire in a modernist style. Nonsense.

The style wars of yesterday were as virulent as the style wars of today, but today’s combatants look back with envy at the pitiful differences that their ancestors thought were so important. Today, such differences are as nothing. Gothic vs. classical is as nothing compared with modernist vs. traditional. Any effort to inflict a modernist spire on today’s Notre-Dame would shock the French to the core, and ignite a firestorm of opposition such as to remind us all of last Monday’s fire itself. Sacrebleu! I would not be surprised if such a proposal caused the donors of hundreds of millions of euros to cancel their pledges – and with very good reason. The money is to rebuild, not destroy.

“Adapted to techniques and challenges of our times,” indeed! We all know what that means. VLD would spin in his grave. They shall not pass!

This blog was begun in 2009 as a feature of the Providence Journal, where I was on the editorial board and wrote a weekly column of architecture criticism for three decades. Architecture Here and There fights the style wars for classical architecture and against modern architecture, no holds barred. History Press asked me to write and in August 2017 published my first book, "Lost Providence." I am now writing my second book. My freelance writing on architecture and other topics addresses issues of design and culture locally and globally. I am a member of the board of the New England chapter of the Institute of Classical Architecture & Art, which bestowed an Arthur Ross Award on me in 2002. I work from Providence, R.I., where I live with my wife Victoria, my son Billy and our cat Gato. If you would like to employ my writing and editing to improve your work, please email me at my consultancy, dbrussat@gmail.com, or call 401.351.0457. Testimonial: "Your work is so wonderful - you now enter my mind and write what I would have written." - Nikos Salingaros, mathematician at the University of Texas, architectural theorist and author of many books.
View all posts by David Brussat →
This entry was posted in Architecture, Preservation and tagged Notre Dame, Paris, Style Wars, Voillet Le Duc. Bookmark the permalink.

3 Responses to Flèche of Viollet-le-Duc