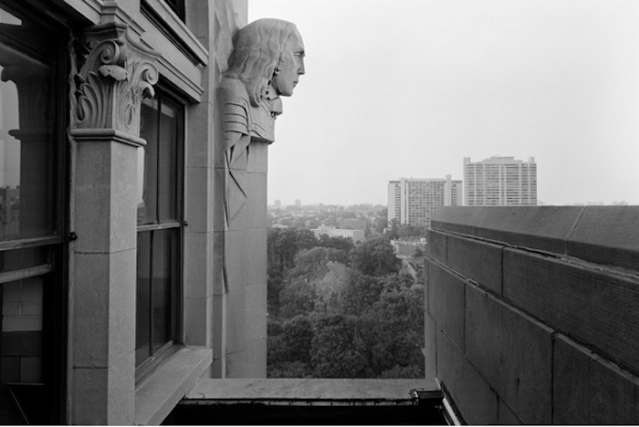 Philadelphia’s Board of Education Building in Witold Rybczynski’s neighborhood. (Architect)

“Witold Rybczynski on architectural PTSD and what James Stevens Curl gets wrong (and right) in his controversial new book” is the sub-headline of Rybczynski’s review of Making Dystopia, the magisterial history of modern architecture by Britain’s most accomplished architectural historian.

The opinion of this book by America’s most celebrated architecture critic in Architect, its most notorious architecture journal, is decidedly surprising. Though Rybczynski’s editors (I suppose) have used the subhead to give the critic a little bit of cover, his review is mostly, and most importantly, about what Making Dystopa gets right. He starts out by describing the beautiful old buildings he walks past in Philadelphia, where he lives, and how dreadful most buildings became after 1932. “What happened?” he asks. “According to Curl, what happened was ‘architectural barbarism.'” The author “does not mince words,” the critic states, and then he goes on to quote the book’s thesis, starting with how modern architecture emerged in the 1920s:

It became apparent that something very strange had occurred: an aberration, something alien to the history of humanity, something destructive aesthetically and spiritually, something ugly and unpleasant, something that was inhumane and abnormal, yet something that was almost universally accepted in architectural circles, like some fundamentalist quasi-religious cult that demanded total allegiance, obedience, and subservience.

“Curl’s language may be immoderate,” Rybczynski responds, “but he is not wrong.” (Actually, to anyone who understands what modern architecture has done to the world, the language of Dystopia, published by Oxford University Press, seems diplomatic, albeit often engagingly witty.) He continues:

In its banning of ornament, which had characterized every epoch since the Egyptian pharaohs, the International Style was an aberration. Without ornament to provide meaning, buildings did appear inhumane. The result of enthusiastically embracing industrialization and mass production, and especially using exposed concrete, was often ugly and unpleasant. (The ancient Romans built in concrete, but they clad it in marble.) And there was something fundamentalist about the Modern Movement’s intolerance, its rejection of the past, and its narrow-minded—not to say puritanical—insistence on adherence to a narrow set of aesthetic norms.

But Rybczynski, despite his natural reactions to the buildings he walks by in his Logan Square neighborhood, normally tries to toe the company line when it comes to modernism. So he cannot be expected to write a review that applauds Dystopia without reservation.

He says the book is too long, that it is “gossipy,” that it has two personalities (David McCollough and Hunter S. Thompson), and fails to mention some eminent non-Bauhaus modernists, supposedly including Frank Lloyd Wright, who is “inexplicably ignored,” although he is cited in the index six times. (He does not criticize the book’s extensive notes, index and bibliography, as some critics have done.) He notices Stevens Curl’s supposed “soft spot” for Ludwig Mies van der Rohe, who led the Bauhaus school in the 1930s; my candidate for Stevens Curl’s soft spot would be architect and modernist impresario Philip Johnson, but the author disclaims any such feeling. After curating the famous 1932 MoMA exhibit on International Style, Johnson spent almost a decade as a Nazi in Germany and the U.S. The book goes deeply into the collaboration of the founding modernists with totalitarian governments in Europe, including Le Corbusier, founding Bauhausler Walter Gropius and Mies, but none of this is mentioned in Rybczynski’s review.

Here is his major objection to Stevens Curl’s explanation for the “strange rise” of modern architecture (from the book’s subtitle “The Strange Rise and Survival of Architectural Barbarism”):

[World War I] opened the door to radical change—whether it was political (Nazism), economic (the New Deal), or architectural (Modernism). This, rather than Curl’s theory of a quasi-religious cult, is a more convincing explanation for the “strange rise” of modern architecture. As the title of his book suggests, the author assumes malevolence on the part of Gropius, Le Corbusier, et al., but what if the International Style was instead the result of a sort of postwar architectural PTSD?

It’s a sly move to attribute the sickness of modern architecture to PTSD, as if it has a sort of call on our sympathy. But “architectural PTSD” is not just a good joke. It has academic credentials. Ann Sussman was the first to draw attention to Mies’s and Gropius’s post-traumatic stress disorder from WWI, and Corbusier’s place on the autistic spectrum, and the rejection in their work of ornament and their preference for blank space. Sussman, architect, researcher and co-author of Cognitive Architecture (2014), has documented her neurobiological insights through eye-tracking and other technologies, publishing and presenting it widely to academic and other audiences in recent years. It is not just as a symbol of the machine age that modern architecture is so sterile, but a psychological response in the minds of young, fanciful, cranky architects to mental illness.

Of course, Stevens Curl does not attribute modernism’s strange rise or survival to its status as a “quasi-religious cult” and then leave it at that. He spends chapters building a convincing, scholarly, factual narrative of how the early modernists, influenced by the communists and the Nazis, constructed the cult. When Hitler refused to embrace the new experimental style as the design template of the Third Reich, the modernists decamped for America and, inserting themselves into top academic posts via Harvard, MoMA, and Philip Johnson, worked with General Motors, the CIA and the U.S. industrial elite to delink modernism from socialism and refashion it as the boy-toy of capitalist democracy. The propaganda expertise of the modernist founders was applied to American media, entertainment, academic and corporate levers of social power. And it worked.

So it was not really quite as Rybczynski puts it. He is not “setting the historical record straight” but overlooking it. He writes:

The truth, which Curl never quite acknowledges, is that in the immediate postwar era the public was attracted to anything modern—modern transportation, modern media, modern consumerism, and modern buildings. Unadorned buildings with flat roofs and large expanses of glass were as much a part of the brave new postwar world as television, fast food, tail fins, and capri pants.

No, although the CIA and other powerful institutions were involved, Curl is not engaging in conspiracy theory. Yes, television, fast food, tail fins and capri pants followed World War II, but modern architecture was more than just capri pants and tail fins. The public’s supposed acceptance of overhauling the built environment in a style most people disliked even then did not arise without a major assist from those institutions. To omit the influence of the Nazis, the communists and the propaganda tools the modernists deployed on this side of the Atlantic – through the CIA, for Christ’s sake! – is to leave out most of the story. Acolytes of modern architecture have striven for decades to hide that part of the story, but Stevens Curl lays it out for all to see.

It may be understandable, given the intense pressure on critics, to parrot the conventional wisdom about modern architecture. Maybe that explains why Rybczynski’s rebuttal to Dystopia‘s powerful but rarely heard explanation for the rise of modern architecture is so lame. But he makes up for it, big-time, by returning, in the last segment of his review, to the most vital truth: that traditional architecture’s replacement by modern architecture was very bad for the world. That took courage. Read the review.

A page linking to other reviews of Making Dystopia is also on my AHAT blog.

[Note: Between Jan. 31 and Feb. 15, the survey results from the poll on classical versus modernist architecture have swung from No (the modernists) leading 92-8 percent to Yes (the classicists) leading 64-36 percent. Please vote. The deadline Feb. 26.]

This blog was begun in 2009 as a feature of the Providence Journal, where I was on the editorial board and wrote a weekly column of architecture criticism for three decades. Architecture Here and There fights the style wars for classical architecture and against modern architecture, no holds barred. History Press asked me to write and in August 2017 published my first book, "Lost Providence." I am now writing my second book. My freelance writing on architecture and other topics addresses issues of design and culture locally and globally. I am a member of the board of the New England chapter of the Institute of Classical Architecture & Art, which bestowed an Arthur Ross Award on me in 2002. I work from Providence, R.I., where I live with my wife Victoria, my son Billy and our cat Gato. If you would like to employ my writing and editing to improve your work, please email me at my consultancy, dbrussat@gmail.com, or call 401.351.0457. Testimonial: "Your work is so wonderful - you now enter my mind and write what I would have written." - Nikos Salingaros, mathematician at the University of Texas, architectural theorist and author of many books.
View all posts by David Brussat →
This entry was posted in Architecture, Book/Film Reviews and tagged Corbusier, James Stevens Curl, Making Dystopia, Mies van der Rohe, Modern Architecture, Nazis, Philadelphia, Philip Johnson, Witold Rybczynski. Bookmark the permalink.