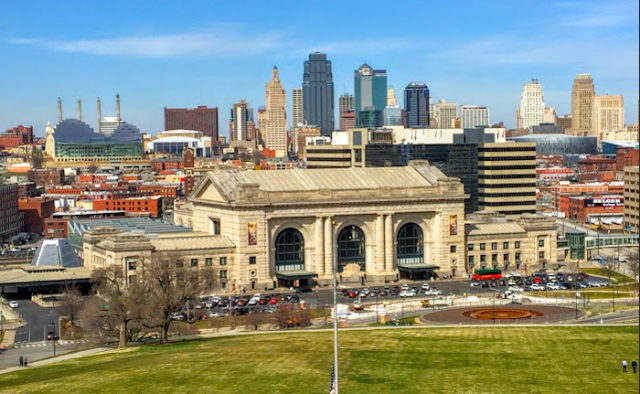 Today, Kansas City, Mo., hosts the New England Patriots in their battle with the Kansas City Chiefs for the championship of the American Football Conference, at 6:40 p.m., and the right to represent the AFC (N.E. for the third time in a row) in Super Bowl LIII. Win or lose, New England – chiefly Boston and Providence, founded in the early 17th century – will have already won the beauty contest with Kansas City, founded in 1838. 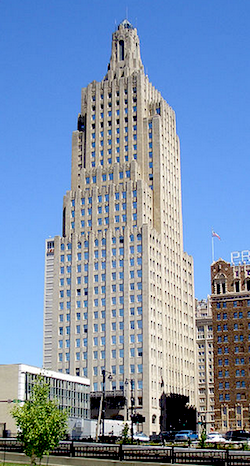 It’s hard for a Pats fan to keep an open mind about the architecture of K.C. It got a much later start, although its start only slightly predates most of the historically significant buildings of Providence. K.C. does have, in the Kansas City Power & Light Building (1931), its own version of the Rhode Island capital’s Industrial Trust Bank Building (1928). The P&L is 31 stories to the ITBB’s 28, but its shaft lacks the latter’s voluptuosity of massing. In 2014 the P&L was transformed into 217 apartments, with a major event space in its lobby. Providence’s tower is sitting empty. Score one for K.C., no doubt. It is not a state capital, however, so it can have no brilliant capitol such as that of Rhode Island. Score one for Providence.

Kansas City’s Union Station (1914), with its Beaux Arts design, arguably outshines Providence’s own Union Station (1898) aesthetically, and still hosts Amtrak trains and a development called Science City, which contains, among other science-related features, a planetarium, plus retail and restaurants. K.C.’s World War I memorial, known as the Liberty Memorial, was dedicated in 1926 stands 217 feet tall compared to our WWI memorial (1929) and its 150 feet, but ours, designed by Paul Philippe Cret, is more beautiful. Score another for Providence. Both cities have excellent art museums that have been mangled by modernist additions.

But the major difference that places Providence, and to a certain extent Boston, above K.C. is the survival, largely intact, of major historic neighborhoods, including Beacon Hill and Back Bay in Boston and, in Providence, College Hill, the East Side and many other of our old neighborhoods – there are no “new” ones to speak of. Most of all, while K.C. boasts a large number of preserved historic buildings downtown, Providence’s downtown is the only one in the nation listed in its entirety on the National Register of Historic Places. Very few modernist buildings interrupt our downtown’s historical fabric, whereas in Kansas City the goodly number of historic buildings never cohere into a sense of place because their cohesion is destroyed by its many modernist buildings and skyscrapers. On the other hand, Kansas City was a prime example of the City Beautiful Movement, and while downtown’s classicism is largely drowned out today, the city features parks and boulevards from that era. Score it for K.C. Providence’s Exchange Place (now Kennedy Plaza) exemplified the movement here, which had not much by way of the classical ensembles that marked the apogee of the City Beautiful – now largely discarded, alas, throughout the nation.

I hope readers more familiar with the City of Fountains will enlighten me if they think I’ve given it the shaft. I’m afraid that in this pre-game assessment I lack the confidence to make valid judgments. I’ve not seen K.C. since the mid-’70s, when I was shown around twice by old college chums, first John Amick and then Brad Miller, while we were at the University of Missouri in Columbia. Wikipedia refers to the massive acreage of parking lots back then, but much good has been done by downtown’s revitalization after 2000, even as much bad has been done simultaneously, with more modernist buildings pockmarking the cityscape. I do recall seeing the fabulous Country Club Plaza, south of downtown, the first shopping center in the nation built with automobiles in mind. Beautiful, in a Spanish colonial style. (See below)

In that other contest, I believe that it will be New Orleans over Los Angeles in a romp, and in the NFC championship, too. [Update: Oh, well.] 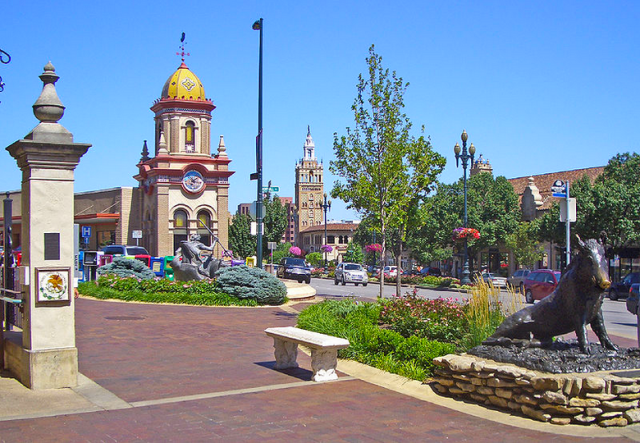 This blog was begun in 2009 as a feature of the Providence Journal, where I was on the editorial board and wrote a weekly column of architecture criticism for three decades. Architecture Here and There fights the style wars for classical architecture and against modern architecture, no holds barred. History Press asked me to write and in August 2017 published my first book, "Lost Providence." I am now writing my second book. My freelance writing on architecture and other topics addresses issues of design and culture locally and globally. I am a member of the board of the New England chapter of the Institute of Classical Architecture & Art, which bestowed an Arthur Ross Award on me in 2002. I work from Providence, R.I., where I live with my wife Victoria, my son Billy and our cat Gato. If you would like to employ my writing and editing to improve your work, please email me at my consultancy, dbrussat@gmail.com, or call 401.351.0457. Testimonial: "Your work is so wonderful - you now enter my mind and write what I would have written." - Nikos Salingaros, mathematician at the University of Texas, architectural theorist and author of many books.
View all posts by David Brussat →
This entry was posted in Architecture, Preservation and tagged Boston, Downtowns, Kansas City MO, New England Patriots, Providence. Bookmark the permalink.