The three rival proposals to build on the east bank of the Providence River. (195 commission)

The headline refers to the three proposals to build on three parcels along the banks of the Providence River in the I-195 corridor. I missed the I-195 commission’s truncated meeting on this matter just before Christmas. The panel left before asking questions of its consultant, Utile, of Boston, hired to judge the three proposals for this land. But the very diligent Jewelry District Association met to discuss the proposals on Tuesday evening, and so I was able to see whether and how the proposals had evolved.

Utile assembled the three proposals from the Carpionato Group, Post Road Residential, and Spencer Providence. Olin Thompson, of the JDA, broke this down so that each proposal could be easily compared to its rivals. My last blog post on the three was “I-195 eastern front heats up” from last May – a long time for such an important decision by the commission to hang in limbo. And not much seems to have changed. The next 195 commission meeting was supposed to choose the winner – Door No. 1, Door No. 2 or Door No. 3? – but it might not get beyond the commissioners’ questions for the consultant who was paid to review the three proposals.

After batting the three contenders back and forth – and generally slapping the Carpionato and Post Road proposals upside the head – attendees at the meeting seemed to favor the Spencer proposal. As of now, I would agree. 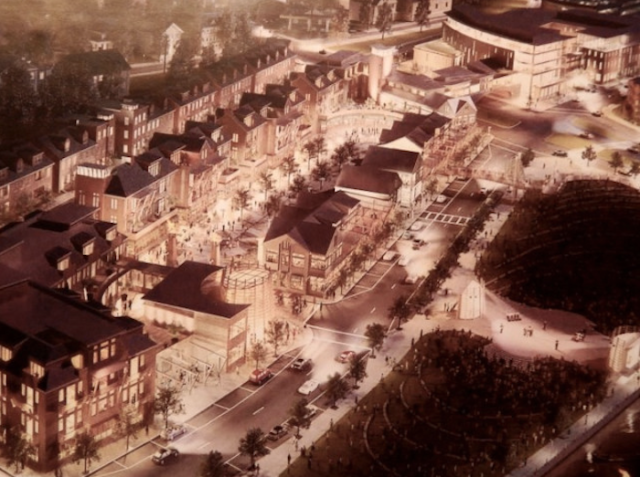 Carpionato first announced its proposal way back in 2013, and it was lovely. Since then, it has gone through several stages of “value engineering” (dumbing down), with its initial romantic jumble of gables and mostly modest-sized structures having given way to more flat roofs on fewer but larger structures. It was originally more like a village, which as an exercise in urban infill could have worked well. Today, it comes much closer to living down to the suburban label it has, I think, been given prematurely. On the other hand, it would take up all three parcels (P2, P5 and P6), so the unions find it the most attractive, and once I would have too – since taking all three parcels reduces the opportunity for a proposal out of sync with Fox Point’s historic character to horn in. Carpionato could up its game in order to win this competition. Don’t hold your breath. That almost never happens.

Post Road is boring in conception, not urban (let alone urbane) but suburban, and the first illustration we’ve seen of what it might look like only demonstrates its demerits. To add to its woes, competition-wise, it uses only one parcel, P5. So its tedium offends the neighbors (or at least the JDA members) and its size offends potential support by labor. Whereas Spencer leaves one of the three parcels vulnerable to the sort of modernist proposal designed to “challenge” people who would prefer (and rightly so) that any new development seek to strengthen rather than undermine the neighborhood’s character, Post Road leaves two of three parcels in the lurch. Having joined JDA in dumping on Post Road, I must give it credit for its design, which, to judge from the illustration, leans more traditional than modernist, at least to some slight degree. That all three proposals seem to possess that virtue, more or less, is quite amazing, given the constipated modernism planned or delivered throughout the rest of the 195 corridor so far. Except for the Fane tower, the JDA and its allies, even the Providence Preservation Society, have seemed OK with that – which is a big problem for the coherence of their otherwise excellent efforts to serve their various Providence constituencies.

Drawing of Spencer Providence proposal for eastern segment of I-195 corridor. (Spencer)

Since Spencer Providence threw its hat in the ring last April, its proposal does not seem to have changed very much. I described all three plans in “Hand-to-hand fight for 195,” and even then it was clear that Spencer had overtaken Carpionato. Its illustrations still suggest that it has examined Fox Point and used its observations to ensure that Spencer Providence will fit nicely into its urban context. However, the vagaries of architectural illustration must be considered. The Spencer drawings feature a sort of scratchy charm, quirky massing and historical detailing that seems to reflect the character of Fox Point – or rather Wickenden Street, since most of Fox Point consists of single-family homes often split into units for two or more families or individuals. The initial Spencer presentation last year had a cute set of slides in which a dog and its master were shown strolling up and down the twee lanes of the project. Even if the plan were carried out precisely as portrayed above, the reality could be shockingly different if the materials do not carry forward the spirit of the illustrator’s intention. Today, architectural illustration often intends not to reveal the plan but to conceal it. We may hope for the best from Spencer, perhaps, but we must be wary.

The public, the neighbors and the groups that support them must keep their eye on the aesthetics of these projects, because nobody else will. Functional aspects of the rival proposals are vital, but there are rules and guidelines that form the legal envelope within which such elements are put into play. And the market forces that shape what can be delivered are the same for each developer. Whether this grassy stretch of embankment enriches the city will depend a lot more on its aesthetic appeal than on its functional elements. If a developer does not provide a grocery store, a grocery store may be sought later as the space within the development evolves, or it may arise nearby in another development. But it is the appearance of Parcels 2, 5 and 6 that will grace the waterfront or damn it in the end.

This blog was begun in 2009 as a feature of the Providence Journal, where I was on the editorial board and wrote a weekly column of architecture criticism for three decades. Architecture Here and There fights the style wars for classical architecture and against modern architecture, no holds barred. History Press asked me to write and in August 2017 published my first book, "Lost Providence." I am now writing my second book. My freelance writing on architecture and other topics addresses issues of design and culture locally and globally. I am a member of the board of the New England chapter of the Institute of Classical Architecture & Art, which bestowed an Arthur Ross Award on me in 2002. I work from Providence, R.I., where I live with my wife Victoria, my son Billy and our cat Gato. If you would like to employ my writing and editing to improve your work, please email me at my consultancy, dbrussat@gmail.com, or call 401.351.0457. Testimonial: "Your work is so wonderful - you now enter my mind and write what I would have written." - Nikos Salingaros, mathematician at the University of Texas, architectural theorist and author of many books.
View all posts by David Brussat →
This entry was posted in Architecture, Development and tagged Carpionato Group, I-195 Commission, Jewelry District Association, Post Road Residential, Providence Preservation Society, Spencer Providence, Utile Design. Bookmark the permalink.