Blessings be upon readers 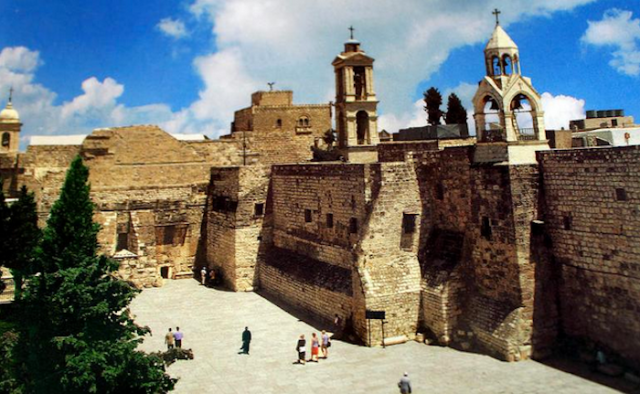 Church of the Nativity, in Bethlehem. (Islamic Landmarks)

Most if not all of the scene above was built since the birth of Christ in a Bethlehem manger long ago. The Church of the Nativity, erected to celebrate that holy birth, still contains, in its basement, the site of the legendary virgin deliverance. At Christmas, celebration takes its many forms. Architecture is one, and through it we celebrate traditions that uphold human hopes for the future, which rely on surmounting challenges to those traditions that have arisen in the recent past. This blog celebrates those traditions year round, several times a week, but today it celebrates its own readers.

I would like to thank all readers of the this blog, including those who might retain, if that can be imagined, some skepticism toward the classical revival, and who, as they keep on reading, may begin to see the reason behind the prospect that a return to tradition in the design and construction of houses, buildings, cities and towns can assist an efflorescence of traditional cultural revivals, artistic and otherwise,  musical, both classical and folk, figurative sculpture and painting, along with the rise of a more humane back-to-basics sensibility, a smaller scale in every human endeavor, and a greater humility in the advancement of science and technology – that all this could actually bring a happier, lovelier world of greater fulfillment, greater sustainability and greater capacity to come together and solve, in an atmosphere of hope uplifted by beauty, the local, regional, national and global problems that we all face, and ponder at this time of year.

This is a tall order – oops, a tall expectation. But this year has seen the emergence of a book of hope, a volume called Making Dystopia whose intention is quite the opposite: to reverse the dystopia already upon us. Its author, James Stevens Curl, has written a history – the most comprehensive on record – of a catastrophe that many believe to be at or near the root of the gathering crisis in the affairs of humanity. By exalting sterility, utility and technology in a plan to turn society into machinery, modern architecture has stifled the spirit that had accomplished great progress for humanity. Stevens Curl wants us to get our humanity back, and since acceptance is the first step to a cure, his book could be the medicine we need.

So I will be setting up a third page in my blog dedicated to Making Dystopia, where readers can go to buy the book and read reviews by writers who have read and understood it, many criticizing establishment critiques by reviewers whose misunderstanding, oftentimes, seems emboldened by their resolute refusal to read the book. Maybe other things will be posted there too. Look for that page soon. Meantime, merry Christmas and a joyous season for all.

“The main access to the Church of the Nativity in Bethlehem is this Liliputian and simple door in the main façade known as “Door of Humility.” It dates back to the Ottoman period, its size meant to prevent carts being driven in by looters, and to force even the most important visitor to dismount from his horse as they entered the holy place. The doorway was reduced from an earlier Crusader doorway, the pointed arch of which can still be seen above the current door.” (Flickr)

This blog was begun in 2009 as a feature of the Providence Journal, where I was on the editorial board and wrote a weekly column of architecture criticism for three decades. Architecture Here and There fights the style wars for classical architecture and against modern architecture, no holds barred. History Press asked me to write and in August 2017 published my first book, "Lost Providence." I am now writing my second book. My freelance writing on architecture and other topics addresses issues of design and culture locally and globally. I am a member of the board of the New England chapter of the Institute of Classical Architecture & Art, which bestowed an Arthur Ross Award on me in 2002. I work from Providence, R.I., where I live with my wife Victoria, my son Billy and our cat Gato. If you would like to employ my writing and editing to improve your work, please email me at my consultancy, dbrussat@gmail.com, or call 401.351.0457. Testimonial: "Your work is so wonderful - you now enter my mind and write what I would have written." - Nikos Salingaros, mathematician at the University of Texas, architectural theorist and author of many books.
View all posts by David Brussat →
This entry was posted in Architecture and tagged Architecture Here and There Blog, Back To Basics, Christmas, Church of the Nativity, classical architecture, James Stevens Curl, Making Dystopia, Nativity, Readers, Thank You. Bookmark the permalink.

1 Response to Blessings be upon readers