Sir Roger Scruton, the British philosopher and advocate of classical beauty and architecture, has been named chairman of a commission called Building Better, Building Beautiful to advise Britain’s government on issues of beauty in housing policy. This is fabulous news. Who better? Scruton is a knight, after all, and has long donned shining armor. 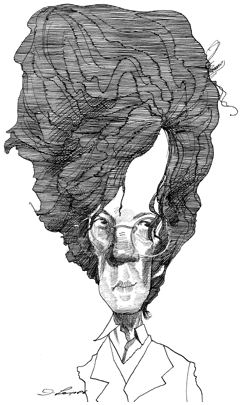 By David Levine for the NYRB

Naturally, the choice has irked the forces of modern architecture arrayed on the battlements of the design establishment, whose helots have already started heaving hot pitch over the walls to block him and the forces of architectural tradition. The modernists are already in a fever over the publication of Making Dystopia, by James Stevens Curl, who just has published the most comprehensively damning history of modern architecture ever. Together, maybe he and Sir Roger can jujitsu the design establishment.

Scruton’s appointment recalls the furor over here sparked by the appointment of Thomas Gordon Smith, a classicist at Notre Dame, as chief architect of the General Services Administration, which oversees all federal building projects (no small portfolio). The mods howled and President George W. Bush buckled. British Prime Minister Theresa May appears to be made of equally stern stuff, but she may be too distracted by Brexit to succor the gnashing of teeth over Scruton.

It is also worth noting that May’s cabinet has had ministers of housing and of transport who vocally support traditional design, and perhaps other top officials of like view of whom I am unaware. And of course there is Prince Charles. The United States has never had advocates of tradition in major official or political posts or in other realms of public life, although the excellent Justin Shubow, president of the National Civic Art Society, has just been named to a seat on the U.S. Commission of Fine Arts.

May’s latest housing minister Kit Malthouse was recently castigated by modernists for tweeting that he preferred the new U.S. federal courthouse in Tuscaloosa, Ala., (top photo) with its inspiring ancient Greek temple design, over a glassy modernist commercial building in London (left). Click on the Malthouse tweet. Although Twitter replies hardly reflect any kind of deep thinking, this embarrassing tripe at least gets its viewpoint across. Commentary on architecture by professional modernists is actually far worse, filled with jargon that is incomprehensible to the layman, no doubt intentionally so.

The inability of modernist architects to defend their work recalls a similar inability or disinclination of traditional architects to defend traditional architecture in the 1920s and ’30s, when it was challenged by modernism after a reign as “the establishment” lasting not decades but centuries, if not millennia. If inarticulation precedes a fall from grace, then the pathetic reaction to Stevens Curl’s book and to Roger Scruton’s appointment bodes poorly for the modernists as they cling ludicrously to their power.

Even though tradition is naturally conservative, traditional architecture is a big tent that naturally appeals to the left as well as the right. The allied cause of historic preservation, for example, appeals as much to the left as to the right. Of course some strains of either cause appeal more to one side than to the other. Traditional architecture’s superior ecological sustainability should appeal to the left even though the modernists prefer the dubious gimmickry of LEED credentialism as a response to climate change.

Most supporters of traditional architecture hesitate to let their essentially nonpartisan aesthetic preferences get tangled up in the coils of partisan politics. That’s an understandable concern, but the quality of an idea arises from the merits of the idea itself, and not from the merits or demerits of those who support the idea.

Above all, do not denigrate what has come to be called the style wars. The public prefers traditional to modernist styles by a very wide margin, and these are firm convictions arising largely from intuition. Architecture is the only art that people engage personally every day of their lives, and so most people have solid judgment based on their innate, neurobiological reaction to their experience – it is superior to the judgment of the modernists, which is based on expertise, so-called, that arises from the purging from students in architecture schools of the conventional respect for beauty. If advocates of tradition abandon the appeal to style, however vital the various alternative appeals may be, the public will not be enlightened but turned off, confused and dismayed. Trads who buy into modernist disdain for style as a primary consideration in architecture play right into the hands of the mods.

In fact, Scruton in his 1979 book The Aesthetics of Architecture states:

A more important distinguishing feature of architecture is provided by its character as a public object. A work of architecture imposes itself come what may, and removes from every member of the public the free choice as to whether he is to observe or ignore it. Hence there is no real sense in which an architect creates his public; the case is wholly unlike those of music, literature and painting, which are, or have become, objects of free critical choice. … Clearly, the architect may change public taste, but he can do so only by addressing himself to the whole public and not merely to some educated or half-educated part of it.

Have faith in the public!

Sir Roger Scruton as the knight errant of beauty is an idea whose time has come.

This blog was begun in 2009 as a feature of the Providence Journal, where I was on the editorial board and wrote a weekly column of architecture criticism for three decades. Architecture Here and There fights the style wars for classical architecture and against modern architecture, no holds barred. History Press asked me to write and in August 2017 published my first book, "Lost Providence." I am now writing my second book. My freelance writing on architecture and other topics addresses issues of design and culture locally and globally. I am a member of the board of the New England chapter of the Institute of Classical Architecture & Art, which bestowed an Arthur Ross Award on me in 2002. I work from Providence, R.I., where I live with my wife Victoria, my son Billy and our cat Gato. If you would like to employ my writing and editing to improve your work, please email me at my consultancy, dbrussat@gmail.com, or call 401.351.0457. Testimonial: "Your work is so wonderful - you now enter my mind and write what I would have written." - Nikos Salingaros, mathematician at the University of Texas, architectural theorist and author of many books.
View all posts by David Brussat →
This entry was posted in Architecture and tagged Donald Trump, Great Britain, James Stevens Curl, Kit Malthouse, Making Dystopia, Modern Architecture, Prince Charles, Roger Scruton, The Aesthetics of Architecture, Theresa May, traditional architecture. Bookmark the permalink.