North vs. South on Benefit 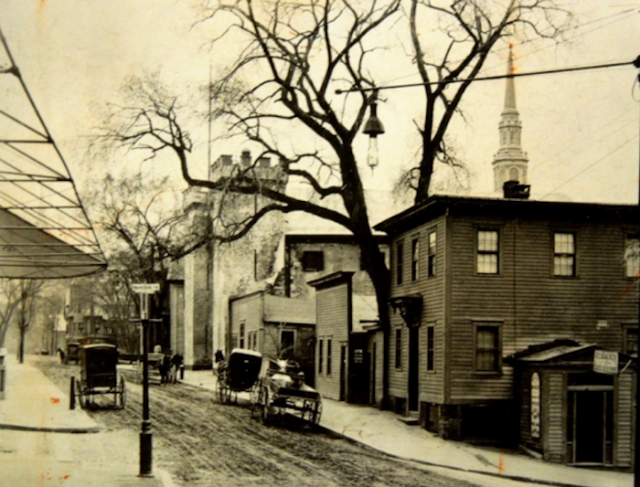 Benefit Street, Providence, circa 1900 (?); arsenal is at center-left. (source unknown … anyone?)

After a couple of centuries dodging various bullets, including the College Hill Study of 1959, Benefit Street has come under the wing of a new organization called the Mile of History Association. It held its first annual meeting Sunday in the Benefit Street Arsenal, designed by James Bucklin (of Arcade fame) and erected in 1839-40. In 1906, the arsenal was moved one lot northward to make way for the East Side railroad tunnel. Whether the photo above (whose source I wish someone could reveal to me) was taken before or after the arsenal’s relocation I cannot tell. (What good am I?)

Vincent Buonanno, formerly chairman of Brown’s facilities and design committee, opened the meeting with a question. How many in attendance were already members of MoHA? Almost every hand rose, but I could not recall whether I had joined or not. Maybe my invitation to the meeting meant I was a member. That’s my working theory for now.

The meeting proceeded as such affairs often do, with an invited speaker, Col. Michael Borg of the city’s department of public works, discussing matters of interest to members. He addressed snow removal, graffiti, streetlight repair, parking difficulties, utility repaving and potholes (often one and the same), trash recycling and trash removal. Between 1984 and 1999, I lived in three addresses on Benefit, all toward its southern end. I walked to work but had a car, so my concern was the ongoing rash of auto B&E’s. The car was a used Honda Accord hatchback from 1983, before Honda’s rise in the world. I left it unlocked so thieves wouldn’t need to break a window to enter. Occasionally I would discover the glove open and my classical tapes flung angrily into the back seat. Once a thief tried to pull my radio/tape player out but succeeded only in ripping the plastic front off. I left it hanging. My poor car was never “broken” into, let alone stolen. Colonel Borg was not asked by any MoHA members in attendance to address auto break-ins.

As I say, I lived in three apartments south of the “civic” middle blocks of Benefit, at (in order of occupancy) 283, 395 and 372. The square footage of all three did not add up to 1,000, but they were great addresses nevertheless. Just living on historic Benefit was a bit of a feather in my cap. Still, I have long wished that I had had a chance to live somewhere on the northern half of Benefit. That half has more of the feel of history. Most of the houses are smaller; most of them are indeed older (in spite of the fact that the street was built from south to north starting in 1756), and there are no grand mansions like the John Brown and Col. Joseph Nightingale houses to the south. (Not that there’s anything wrong with that.)

Most of the buildings on Benefit, including most of its residential properties, have been fixed up since the street was something of a slum through most of the first half of the 20th century. In 1959, the above-mentioned College Hill Survey was undertaken, with recommendations of demolition and urban renewal. Buildings on and near Benefit were assessed by “experts,” given scores, with many declared substandard and consigned to bulldozers to make way for modernist townhouses and a pair of glass residential towers of 19 and 23 stories, one at each end of Benefit. Fortunately, College Hill, including some of the city’s first families, experienced a slow burn at what the city had in mind. Several society matrons took the lead in buying some of the most decrepit houses, fixing up their exteriors and selling them to families willing to undertake interior renovations on their own. Eventually, property values skyrocketed, putting the lie to the experts’ assumption that demolition was the inevitable fate of old houses whose only need was love and attention.

Most of the earliest preservation activity took place toward the northern end of the street. The pavements were replaced by brick and beautiful faux gas-lamps were installed. Famous architecture critic Ada Louise Huxtable came to Providence to denounce these features as inauthentic. Huxtable would no doubt have preferred modernist cobra-head highway lighting and cheesy Cianci-grade el-cheapo hand-in-pocket brushed-concrete sidewalks. But the public loved the bricks and the gas lamps, and time has healed their alleged inauthenticity. Today, their upkeep is a major goal of the Mile of History Association, and rightly so. Good on them! Sign me up! (If need be.)

Nevertheless, even broken brick sidewalks and period lampposts sporting graffiti and busted glass are more beautiful and appealing, by far, than the sort of modernist crapola that would have fluttered the heart of the late Ms. Huxtable. MoHA must make sure that Benefit Street and Providence as a whole are protected from the current spate of bad architecture sprouting like pustules of acne on the face of the city. This vital advocacy should be its top priority, for Benefit Street will surely die if the city around it dies.

This blog was begun in 2009 as a feature of the Providence Journal, where I was on the editorial board and wrote a weekly column of architecture criticism for three decades. Architecture Here and There fights the style wars for classical architecture and against modern architecture, no holds barred. History Press asked me to write and in August 2017 published my first book, "Lost Providence." I am now writing my second book. My freelance writing on architecture and other topics addresses issues of design and culture locally and globally. I am a member of the board of the New England chapter of the Institute of Classical Architecture & Art, which bestowed an Arthur Ross Award on me in 2002. I work from Providence, R.I., where I live with my wife Victoria, my son Billy and our cat Gato. If you would like to employ my writing and editing to improve your work, please email me at my consultancy, dbrussat@gmail.com, or call 401.351.0457. Testimonial: "Your work is so wonderful - you now enter my mind and write what I would have written." - Nikos Salingaros, mathematician at the University of Texas, architectural theorist and author of many books.
View all posts by David Brussat →
This entry was posted in Architecture, Preservation and tagged Ada Louise Huxtable, Benefit Street, College Hill Study, Historic Preservation, Michael Borg, Mile of History Association, Providence RI, Vincent Buonanno. Bookmark the permalink.

2 Responses to North vs. South on Benefit