Thursday evening I attended a lecture on the late Bristol architect Lombard Pozzi, who died in 2013. Lombard Pozzi – what a great name! More than anyone else, Pozzi is responsible for Bristol’s having managed to remain true to its charming self. Pozzi was among that rare breed, an architect trained also in preservation. He was born in Bristol and lived in one house on Hope Street since 1949. His legacy may be viewed up and down Hope, from the Peaberry Block, completed in 1988 (I dined at Le Central Bistro before the lecture) to his sensitive – yet much larger – 2008 addition to the Rogers Free Library, where his longtime friend and colleague Kevin Jordan spoke, leading his audience by way of slides he had lately taken of Pozzi’s projects. 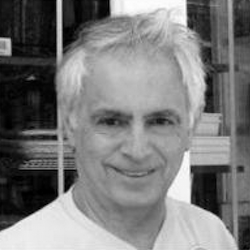 Pozzi was unlike many professional admirers of historical architecture, who think a beautiful building a century or two old is a fine thing, so long as its features do not serve as inspiration for any building constructed today. His new buildings were designed to fit gently amid the townscape. News articles previewing last night’s lecture stressed (to quote one on eastbayri.com) that Pozzi “both loved new buildings and had a healthy respect for those we inherited.” I suspect the new buildings he loved were primarily those that respected the old buildings he loved. Jordan opined that Pozzi thought little of modernist buildings “designed not to be liked.” Are they thought provoking? More likely they are headache provoking.

I’m sure that I’ll hear from those, if any, who think I have misrepresented Pozzi’s attitude toward modern architecture, or the remarks made by the good professor (retired from Roger Williams University). No doubt he must have liked some of it. After all, even I like some modernist buildings.

None of us is perfect!

Jordan told some wonderful stories of Pozzi, including their dumpster-diving in Bristol and in locations as far off as London. Pozzi was well-known for rescuing and reusing abandoned architectural features such as window shutters, window frames, balustrades, columns, doors, slate shingles, bricks, stone slabs, old electrical boxes, modern light fixtures, tin ceilings and clocks. He rescued and restored over 200 time-pieces. He saved old architectural drawings. The Providence Journal architecture columnist Catherine Zipf wrote a piece last February on a cache of 300 moldy construction drawings of Newport’s Ochre Court by Richard Morris Hunt’s firm (“Hidden treasure in Lombard’s garage“). Of how they came into Pozzi’s possession, she wrote:

We think the drawings were left in Ochre Court until 1947 and rediscovered when it was converted into Salve Regina College. But no one cared to put them in an archive. Instead, we think that someone involved with the project took them home. Pozzi (who knew everyone) collected the drawings from that person some time later. To Pozzi, their value was obvious. He cared.

Bonnie Warren, who worked with Pozzi on and off throughout his career, rose to remind the audience (composed mostly, it seemed, of friends and clients) of the architect’s sense of humor and compelling prose style. The evening left me thankful that someone so full of love for old buildings and their details, and the intricacy of their construction and preservation, existed in Rhode Island.

I also feel no small twinge of regret at not having learned of Pozzi sooner. Certain Rhode Island architectural eminentoes as Norman Isham, Irving Haynes and others, I’m sure, have not received their due in my almost thirty years of columniating. I once noted the sad fact and pledged to rectify it, but so far have not. I hope this post on Lombard Pozzi will bring me to that duty.

This blog was begun in 2009 as a feature of the Providence Journal, where I was on the editorial board and wrote a weekly column of architecture criticism for three decades. Architecture Here and There fights the style wars for classical architecture and against modern architecture, no holds barred. History Press asked me to write and in August 2017 published my first book, "Lost Providence." I am now writing my second book. My freelance writing on architecture and other topics addresses issues of design and culture locally and globally. I am a member of the board of the New England chapter of the Institute of Classical Architecture & Art, which bestowed an Arthur Ross Award on me in 2002. I work from Providence, R.I., where I live with my wife Victoria, my son Billy and our cat Gato. If you would like to employ my writing and editing to improve your work, please email me at my consultancy, dbrussat@gmail.com, or call 401.351.0457. Testimonial: "Your work is so wonderful - you now enter my mind and write what I would have written." - Nikos Salingaros, mathematician at the University of Texas, architectural theorist and author of many books.
View all posts by David Brussat →
This entry was posted in Architecture, Preservation and tagged Bristol RI, Catherine Zipf, Kevin Jordan, Lombard Pozzi, Preservation, Rogers Free Library. Bookmark the permalink.

5 Responses to Learn from Lombard Pozzi