Rome: Who are those guys? 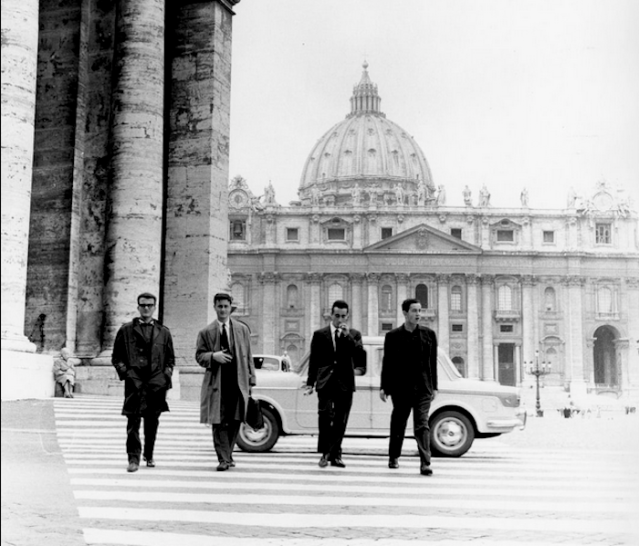 Who are those guys?

Good question. But first, I must point out that indecipherable notes on a recent lecture force me to leapfrog a topic I’d intended to address today and grab a quicky topic instead. I’ve chosen to simply link to a collection of thirteen photographs of Rome selected from the RIBA Collection (Royal Institute of British Architects). “Dome sweet dome: the glory of Rome – in pictures” appeared in the Urban Eye section of The (U.K.) Guardian.

There are buildings. There are people. There is Rome. Enjoy.

But before dipping into this trove, consider the four men in the first photograph, with which I’ve illustrated this post. I expected to learn from its caption that these young sophisticates in St. Peter’s Square were modernistos – modernist architects. They have just finished thumbing their nose at the Basilica, expecting, in the manner of their ilk, that it would be demolished and no longer exist to thumb its nose at their work. But the caption was no help, except to inform me that the photo was taken in 1961 at St. Peter’s Square by Monica Pidgeon. But I am allowed, still, I think, to imagine that they are modernist architects, and to think my nasty thoughts about them.

Whoever they are, they are lucky. They are in Rome. Like Venice, like Florence, like Paris, Rome has banned modern architecture from the city, relegating it to the suburbs. Therefore, beauty accompanies the people of those cities, rich or poor, wherever they may go, every minute of the day. Look at these pictures. Most show people living their lives amid surroundings of a sort that most Americans must do without, who as a result might not be aware of what they are missing, and may have lost the ability to appreciate it – which does not require a degree in art appreciation. Does this lower their quality of life? Yes, it does. Is there someone to blame for this. You bet.

Sorry. Don’t get me going. Just look at the pictures.

(Maybe someone knows who those four guys are, and can relieve me of the burden of assuming they are modernist architects. Tip o’ the hat, by the way, to Richard Jackson, who snagged this set of photos from CityLab.)

This blog was begun in 2009 as a feature of the Providence Journal, where I was on the editorial board and wrote a weekly column of architecture criticism for three decades. Architecture Here and There fights the style wars for classical architecture and against modern architecture, no holds barred. History Press asked me to write and in August 2017 published my first book, "Lost Providence." I am now writing my second book. My freelance writing on architecture and other topics addresses issues of design and culture locally and globally. I am a member of the board of the New England chapter of the Institute of Classical Architecture & Art, which bestowed an Arthur Ross Award on me in 2002. I work from Providence, R.I., where I live with my wife Victoria, my son Billy and our cat Gato. If you would like to employ my writing and editing to improve your work, please email me at my consultancy, dbrussat@gmail.com, or call 401.351.0457. Testimonial: "Your work is so wonderful - you now enter my mind and write what I would have written." - Nikos Salingaros, mathematician at the University of Texas, architectural theorist and author of many books.
View all posts by David Brussat →
This entry was posted in Architecture, Photography, Uncategorized and tagged Beauty, Cities, classical architecture, Europe, Modern Architecture, Preservation, RIBA, Rome. Bookmark the permalink.

4 Responses to Rome: Who are those guys?