Some people might think the “cover up” in the headline refers to the legally dubious swap of air rights for extra height that would have enabled 15 stories for Phase 2 of the proposed Edge College Hill apartments on Canal Street.

No, I refer to another cover up.

The most important function of Phase 2 is to cover up Phase 1.

Edge College Hill 1 is a plug-ugly 15-story tower with ridiculously stacked windows that’s already under construction. How did it manage to swing 15 stories? Did it do a swap? And why didn’t opposition to it materialize, since its aesthetic flaws were no secret? Good questions! Anyone?

Opposition to Phase 2 has thankfully led its developer to shrink the tower from 15 to 11 stories. Good! But don’t go too far. Eleven stories is tall enough to block views of Phase 1 from along important street-level view corridors. At the Downtown Providence Design Committee meeting on Monday, revisions were announced that will lop two stories off the seven originally sought for the North Main Street wing of the tower, and two stories off the five-story Steeple Street wing, so that they’d fit in better with the historic buildings nearby. Good!

Since it makes no sense to block an ugly building with another ugly building, it is equally important that revisions appear to be shifting the façade design of Phase 2 toward fitting into the historical setting. And the design of the tower itself has also improved, changing from a pair of grayish materials to something that looks like brick, and changing the original weird pattern of fenestration, akin to Phase 1, to something more regular.

Since Phase 1’s primary material will also be of brick (or a brick-lookalike substance), it seems as if the assemblage of new buildings will at least form a backdrop more congenial to the historical buildings than seemed likely at the outset of the process. Average the two designs together – their massing, their coloration and their detailing – and it may be that the two new buildings will be considerably less of an affront to the oldest neighborhood in the city – a district originally known as Cheapside, after the one in London.

And let’s not forget that each building fills a parking lot. They squash old buildings in spirit but not in fact. No old building needed to be razed. A parking lot represents hope that a lovely new building might be built in the future. We will not be so lucky this time, but it could have been worse.

It would be much better if both of the new buildings were unapologetically traditional instead of the el-cheapo split the difference between old and new style to which edgy-wannabe developers have become addicted. But trying to push developers to do the right thing is to engage in the art of the possible. Those who have opposed Phase 2 have done a very good job. They are to be congratulated. But they must keep up the pressure. That would have been easier if they had first taken aim at Phase 1. 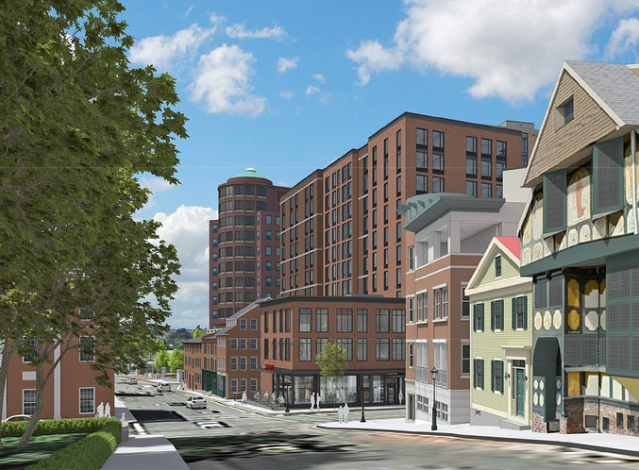 Rendering of Edge College Hill 2, as revised, looking from Thomas down to Steeple. (GCP) 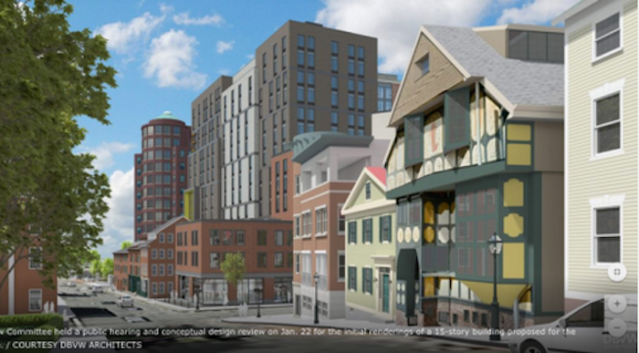 Earlier version of Edge College Hill 2 looking from Thomas down to Steeple. (DBVW) 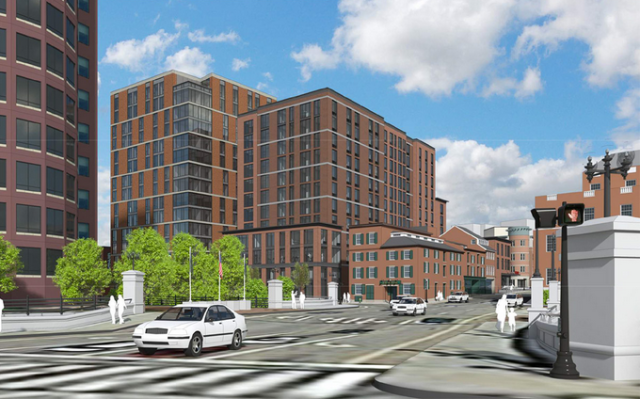 View of Edge College Hill 1 (left) and 2 (right) after height reduction and other changes. (GCP) 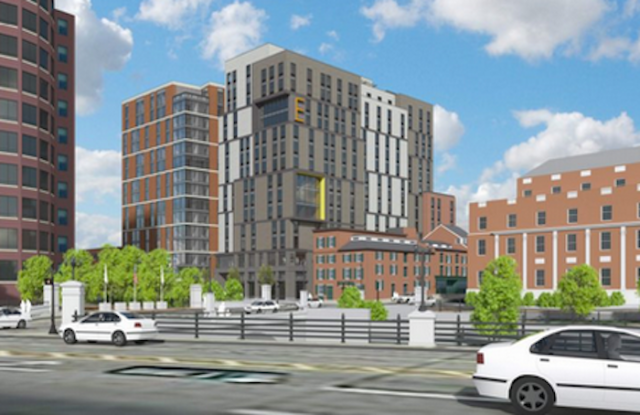 View of Edge College Hill 1 and 2 before height reduction and other revisions. (DBVW)

This blog was begun in 2009 as a feature of the Providence Journal, where I was on the editorial board and wrote a weekly column of architecture criticism for three decades. Architecture Here and There fights the style wars for classical architecture and against modern architecture, no holds barred. History Press asked me to write and in August 2017 published my first book, "Lost Providence." I am now writing my second book. My freelance writing on architecture and other topics addresses issues of design and culture locally and globally. I am a member of the board of the New England chapter of the Institute of Classical Architecture & Art, which bestowed an Arthur Ross Award on me in 2002. I work from Providence, R.I., where I live with my wife Victoria, my son Billy and our cat Gato. If you would like to employ my writing and editing to improve your work, please email me at my consultancy, dbrussat@gmail.com, or call 401.351.0457. Testimonial: "Your work is so wonderful - you now enter my mind and write what I would have written." - Nikos Salingaros, mathematician at the University of Texas, architectural theorist and author of many books.
View all posts by David Brussat →
This entry was posted in Architecture, Development and tagged Downtown Design Review Committee, Edge College Hill, Modern Architecture, Providence RI, Urban Planning. Bookmark the permalink.

10 Responses to Cover-up on Canal Street!