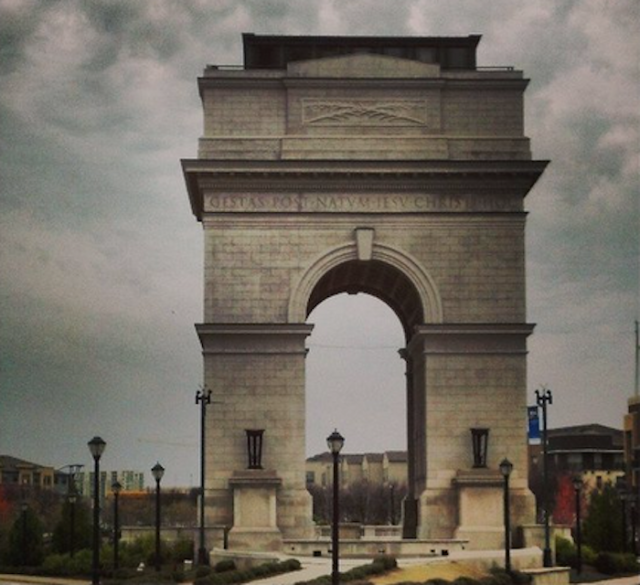 Not many cities in America house a philanthropist dedicated to beauty the way Rodney Mims Cook Jr. strives to beautify Atlanta. Cook established the National Monuments Foundation in 1996 to build classical monuments in Atlanta, among other places. And frankly, not many cities need the attention more than the capital of the New South.

When I last visited Atlanta in 2011, Cook had recently completed the Millennium Gate, a triumphal arch that endeavors to ennoble a neighborhood – the Atlantic Station district in Midtown – and a whole city. A decade prior, Cook completed another classical monument, on Peachtree Street, also in Midtown: the World Athletes Monument, dedicated to the centennial Olympics hosted by Atlanta in 1996. The monument was a gift from Prince Charles. It was designed by Anton Glikin, a student at the prince’s school of architecture, where the young man won a competition sponsored by the school at Cook’s behest. After Lady Di’s 1997 death, the monument served as the focus of public mourning in Atlanta for Charles’s first wife, and is now widely known as the Princess Diana Monument.

These two graceful achievements for Atlanta are being joined by a park named for Cook’s father, the late Rodney Mims Cook Sr., a civic leader and advocate of world peace and civil rights. Cook Peace Park, for which ground was broken May 2017 in the Vine City district, is in the shadow of the new but appalling Falcons stadium. The park will feature a host of classical monuments and statuary dedicated to civil rights and peace, including a monument to the Creek Indian chieftain, Tomochichi, who made peace in the 1730s with Georgia colonists and founder James Oglethorpe.

All quite heartening. In the 1970s, Atlanta saved its iconic Fox Theater and with it the surrounding Beaux Arts hotels, apartment buildings and offices. A neighborhood of preserved commercial buildings and state offices sits just south of downtown, and of course Atlanta’s historic residential enclaves feature homes of elegant design, including not a few by Georgia’s foremost classicist, Philip Trammell Shutze. (I’d been in town to help judge an award program named for him sponsored by the region’s chapter of the Institute of Classical Architecture & Art.) To top it all off, the canopy of trees in Atlanta is so robust that it is called the City in a Forest. The image of a full monty of sterile modernism is not entirely fair to the capital of the New South. 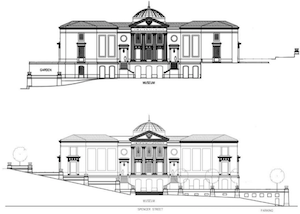 Cook himself points out that the mostly classical firm of Robert Stern Architects, based in New York, has built in Atlanta a host of governmental and institutional buildings, and at least one major commercial tower, over several decades. The New Urbanist firm of Duany Plater-Zyberk & Co., based in Miami, did the master plan for the Atlantic Station district around the Millennium Gate. Franck & Lohsen, of Washington, D.C., has designed a classical Andrew Young Peace Center for the Rodney Cook Peace Park. This trend is excellent.

However, the city continues to forgo opportunities to rebuild itself gracefully. Especially sad is the state of land around Princess Diana Square. Formerly known as Pershing Point, most of its historic Beaux-Arts hotels, offices and apartment buildings were demolished in the 1980s just to ease local traffic snarls. Millions worth of commercial development that arose following the completion of the monument to Lady Di have done little, so far as I can tell, to create a setting worthy of Atlanta’s love for the princess – or itself.

(Hours of scrolling through online business news and development websites have led me to this relatively unsettling conclusion. Frankly, though, I have not returned to Atlanta since 2011, and if any readers are able to dispute my assessment, please do so in a comment or even a guest post.) 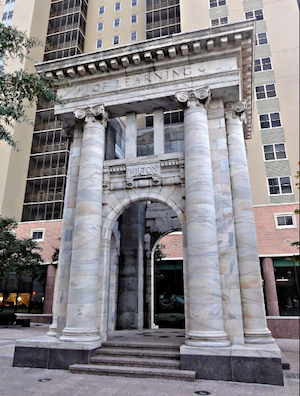 Atlanta has a long history of lovely classical monuments – many sadly throttled by the city’s miasma of modernist glass and steel. At some point those fine examples and the more recent classical monuments by Rodney Cook must be followed by new architecture that expands upon this monumental legacy. The vital purpose of monuments in the service of memory is indispensable, but these monuments will not have served their full potential unless  and until they are joined by many more new buildings of a like spirit. Only then will Atlanta experience the uplift that Georgians deserve and should expect from beautiful architecture. It can happen sooner than you might think.

Almost two decades ago, the Feb. 1, 1999, New Yorker devoted an essay by its architecture critic, Paul Goldberger, to Cook’s effort to revive classical beauty in Atlanta. As he has done elsewhere, Goldberger admits the flaws of modern architecture. “If there is one area in which modernism has failed abysmally,” he writes, “it is in creating civilized urban spaces.” And yet, while predictably disdaining the obvious alternative of a classical revival, he nods a grudging respect for Cook’s stewardship. Goldberger’s piece, “Athens on the Interstate,” deserves a more in-depth treatment. To read it, click the link below.

Churchill said, “We shape our buildings; thereafter, they shape us.” Rodney Cook has made an admirable start, and there’s reason to hope that his work will, if expanded, enable Atlanta to attain the civic greatness foreshadowed by the historic quest of Georgia and its capital city for peace and justice. 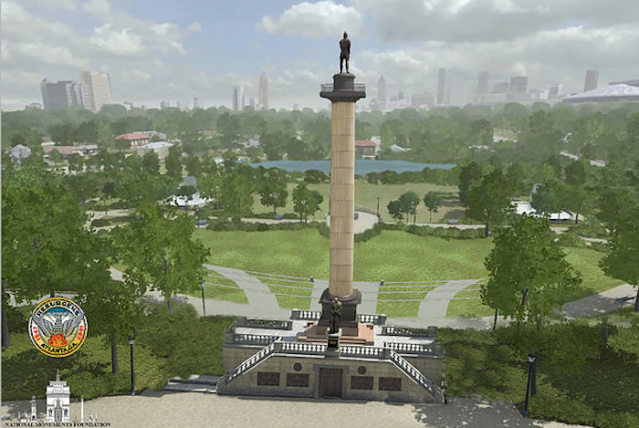 This blog was begun in 2009 as a feature of the Providence Journal, where I was on the editorial board and wrote a weekly column of architecture criticism for three decades. Architecture Here and There fights the style wars for classical architecture and against modern architecture, no holds barred. History Press asked me to write and in August 2017 published my first book, "Lost Providence." I am now writing my second book. My freelance writing on architecture and other topics addresses issues of design and culture locally and globally. I am a member of the board of the New England chapter of the Institute of Classical Architecture & Art, which bestowed an Arthur Ross Award on me in 2002. I work from Providence, R.I., where I live with my wife Victoria, my son Billy and our cat Gato. If you would like to employ my writing and editing to improve your work, please email me at my consultancy, dbrussat@gmail.com, or call 401.351.0457. Testimonial: "Your work is so wonderful - you now enter my mind and write what I would have written." - Nikos Salingaros, mathematician at the University of Texas, architectural theorist and author of many books.
View all posts by David Brussat →
This entry was posted in Architecture and tagged Atlanta GA, Millennium Gate, Prince Charles, Rodney Cook Sr. Park, Rodney Mims Cook Jr., Tomochichi, World Athletes Memorial. Bookmark the permalink.

1 Response to Atlanta strives for beauty