Buttresses of Tribune Tower shot from balcony on the 25th floor. (Chicago Tribune)

Blair Kamin, the architecture critic of the Chicago Tribune, longtime occupant of the Tribune Tower, used his column to lament his departure, with the rest of the newspaper, this Friday, from the Trib’s historic home in the Gothic pile since it opened in 1925.

I say “pile” with a certain reverence which I’m sure Kamin fully understands. His lament for the building designed by Raymond Hood (of Pawtucket, R.I.) and John Mead Howells strikes an elegiac tone. He writes:

I find my eyes roaming over the tower’s flamboyant neo-Gothic silhouette and its innumerable alluring details, like a sculpture of a wise old owl who clutches a camera and symbolizes the powers of careful observation. These last looks are both pleasurable and painful. I love this building, love it more deeply because we’re about to leave it.

But at least, Kamin writes, the paper isn’t moving to the burbs, just to the architectural equivalent of the burbs. He adds:

[T]here’s no glory in being a tenant in somebody else’s stolid modernist high-rise, especially when you’re leaving a building as architecturally distinguished as the tower. One Prudential Plaza could be the box Tribune Tower came in.

How I empathize with Kamin’s predicament. But I wish he would take these emotions and imagine himself not as an architecture critic who has had the pleasure of a quarter of a century arriving and departing daily at the august Tribune Tower, but as someone else. He should take the opportunity to stand in the shoes of the people who usually read his column. He can express his love for a lovable building, but it isn’t the sort of building he usually praises in his column. He should look at his departure from the Trib Tower through the eyes of a citizen of Chicago, a citizen of the world.

Kamin’s support for modern architecture is an attack on the traditional architecture for which his beloved tower stands. He may not interpret it as such, nor want to consider it as such, but so it is. He should instead consider his pen as a sword that he swings to alleviate the plight of the beleaguered citizen who must walk past ten glass-and-steel abominations for every one building that partakes of the spirit of the Tribune Tower.

Take this opportunity, Blair Kamin, to examine your real feelings about architecture. Use your ejection from the Tribune Tower and the sorrow it unleashes as a teaching moment – a learning experience – for you yourself. Then write your column from your prison cell in One Prudential Plaza as if you were Václav Havel writing from his prison cell in Prague. Those are not entirely without parallel. Think about it. Shake the world of architecture to its foundations, and help make the rest of the world a better place. 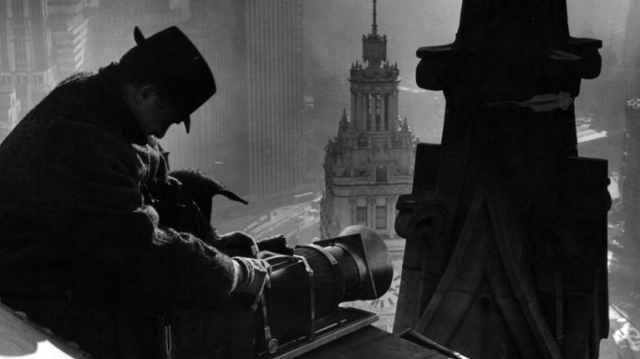 One photog shot by another atop Tribune Tower, with Wrigley Building beyond. (Chicago Tribune)

This blog was begun in 2009 as a feature of the Providence Journal, where I was on the editorial board and wrote a weekly column of architecture criticism for three decades. Architecture Here and There fights the style wars for classical architecture and against modern architecture, no holds barred. History Press asked me to write and in August 2017 published my first book, "Lost Providence." I am now writing my second book. My freelance writing on architecture and other topics addresses issues of design and culture locally and globally. I am a member of the board of the New England chapter of the Institute of Classical Architecture & Art, which bestowed an Arthur Ross Award on me in 2002. I work from Providence, R.I., where I live with my wife Victoria, my son Billy and our cat Gato. If you would like to employ my writing and editing to improve your work, please email me at my consultancy, dbrussat@gmail.com, or call 401.351.0457. Testimonial: "Your work is so wonderful - you now enter my mind and write what I would have written." - Nikos Salingaros, mathematician at the University of Texas, architectural theorist and author of many books.
View all posts by David Brussat →
This entry was posted in Architecture and tagged Blair Kamin, Chicago IL, Chicago Tribune, John Mead Howells, Raymond Hood, Tribune Tower, Vaclav Havel. Bookmark the permalink.