Millar on Harrison in Prov

John Millar has sent me some contextual thoughts about his attribution of some famous old Providence buildings to architect Peter Harrison (see my post “Harrison’s excellent career,” written after his lecture at the Boston Athenaeum last Thursday). His attribution to Harrison of a host of the city’s most celebrated buildings have raised some eyebrows here in the capital of Rhode Island. The 1986 citywide survey of historic architecture by the state preservation office attributes no buildings to Harrison, who has long been celebrated for his work in Newport.

I wanted to address briefly the Harrison designs in the Providence area. First of all, the Old Statehouse on Benefit Street: the design for it (in brick & stone quoins, and with a steeple almost the same as the one on Harrison’s Old Statehouse in Boston) was considered too expensive, so Silas Downer, a member of the General Assembly, took the plans and ruthlessly chopped them down to make the building smaller. If you want to see how it would have looked as originally designed, look at the Kent County Courthouse in East Greenwich, which however is made of wood. The Kent County building was taken directly from the original plans.

Professor Joseph Brown: one of the four Brown brothers, Joseph hung around Harrison for a while trying to learn from him, but did not put in enough time to bring it off. Because he really did design the Providence Market [House], a second-rate design that [was] enlarged and is [now] used by RISD for classroom space, writers over the years have claimed that he was a great architect, and that he designed the Baptist Church, the Joseph Brown House, the John Brown House, and others.

All of those were by Harrison. Although Joseph Brown may well have been the construction supervisor, he certainly didn’t have the knowledge to have actually designed those buildings. The amazing Joseph Brown House with its ogee pediment has a mantelpiece inside that is almost identical to one that Harrison designed decades earlier in Yorkshire, [England], and that design has never appeared in any pattern books. The John Brown House and a few of its contemporaries must have been designed before the Revolution [Harrison died in 1775; the John Brown House is conventionally said to have been built in 1786], but construction was put off until after the war was over for financial reasons.

These remarks seem plausible but plausibility is not the same as factuality. All of Harrison’s papers were burned after his death in New Haven of a heart attack as he was apparently about to be lynched for being a Tory. The loss of his papers has enabled Millar to make a case that Harrison designed some 500 more buildings around the world than the 20 or so that historians give him credit for. Perhaps this scholarship should have been undertaken long ago. Maybe Millar was the first to think of it. Or maybe Millar just went hunting for unattributed or weakly attributed buildings worldwide erected within the span of Harrison’s professional life, and if he could dig up some connection, assigned them to Harrison. Some architectural historians have apparently pushed back against Millar’s claims, but then most professionals don’t like it when their lack of diligence (if that is what it was) is exposed.

I’m looking forward to Millar’s next book on Harrison, which will help sharpen, or mute, the plausibility of his argument that Harrison’s oeuvre is some 30 times what history seems to think. Detailed research backing up Millar’s description of Harrison’s extraordinary life can strengthen the credibility of Millar’s herculean expansion of Harrison’s architectural work. Will the book contain such evidence? I don’t know. One way or another, however, the history of Peter Harrison is one for the ages. 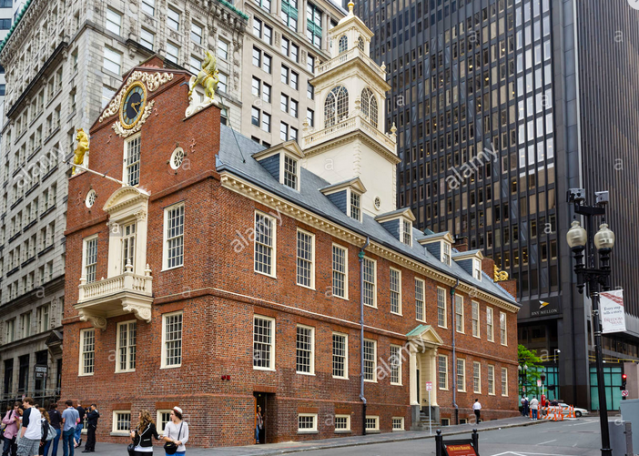 This blog was begun in 2009 as a feature of the Providence Journal, where I was on the editorial board and wrote a weekly column of architecture criticism for three decades. Architecture Here and There fights the style wars for classical architecture and against modern architecture, no holds barred. History Press asked me to write and in August 2017 published my first book, "Lost Providence." I am now writing my second book. My freelance writing on architecture and other topics addresses issues of design and culture locally and globally. I am a member of the board of the New England chapter of the Institute of Classical Architecture & Art, which bestowed an Arthur Ross Award on me in 2002. I work from Providence, R.I., where I live with my wife Victoria, my son Billy and our cat Gato. If you would like to employ my writing and editing to improve your work, please email me at my consultancy, dbrussat@gmail.com, or call 401.351.0457. Testimonial: "Your work is so wonderful - you now enter my mind and write what I would have written." - Nikos Salingaros, mathematician at the University of Texas, architectural theorist and author of many books.
View all posts by David Brussat →
This entry was posted in Architecture and tagged Architectural History, John Millar, Joseph Brown, Peter Harrison, Providence RI. Bookmark the permalink.

2 Responses to Millar on Harrison in Prov