Rendering of OneTen luxury residential tower proposal from circa 2005. (Art In Ruins)

In 2005, Mayor Cicilline permitted a developer from Boston to demolish the dear old Providence National Bank (1929, addition 1950), near the Arcade downtown, before the developer had its financing sewn up. Even before the 2008 recession pulled the rug out from what remained of the proposal, OneTen Westminster died slowly, shrinking from the tallest building in Providence to the chimera of a W luxury hotel before going poof!

After the collapse, the Providence Preservation Society swung into action to save the Weybosset Street façade of the bank building, which the developer had promised to preserve and to incorporate into his proposed modernist residential skyscraper. The façade remains in place, and should serve as the base of whatever eventually arises there.

Indeed, this elegant parking lot is where the Fane tower should go.

A couple of other downtown possibilities exist in that immediate vicinity. There is a parking lot on the other side of the Arcade, between it and the former Paolino World Headquarters, now rehabbed as a residential building. And there are two parking lots on either side of Custom House Street near Pot au Feu, Capriccio, and the Providence River.

A collection of parking lots in Downcity (the old commercial district) between Washington and Weybosset streets is probably the largest available space in the old downtown, but it should be reserved for a mixed multi-building development better calculated to fit into the historic character of that part of downtown. Of course, there are also the vast stretches of Capital Center that remain undeveloped four decades after that project began in 1978. Much of Capital Center’s architecture undermines the vaulting quality of the Providence skyline.

The grand shaper of cities in me calculates that the Weybosset facade lot would be the best place for a very tall building to strengthen the crescendo of the Providence skyline. Second best would be the lots next to the river, and this could even be the best if the alternative is putting the Fane tower too close to the Industrial Trust, as seems to be the case with the defunct OneTen tower in the images at the top and bottom of this post.

I consider the latest design for Fane’s tower ridiculous and even plagiaristic, but even in its current form I would support its construction in the Financial District. Nestled closely up among our other towers, its goofy form would certainly be eye-catching. A downtown location would enable a very tall tower to strengthen the skyline’s crescendo, relieving it from the wandering pustules of height built since 1990. To move the Fane tower there would improve the city in so many ways that the sacrifice might be worthwhile. 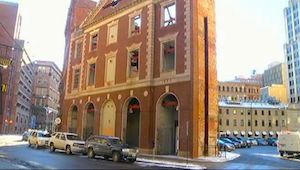 Momentarily I’ll cite these benefits, most of which come from an email dialogue among opponents of the Fane tower and assembled by the Jewelry District Association. But first I’d like to point out that a very tall building of traditional design, inspired perhaps by, say, New York’s Woolworth Building, would be best – if Fane is interested in a truly iconic building rather than a sham iconic building that belongs in Dubai.

The JDA bunch includes Olin Thompson, Lewis Dana, Bob Burke, Brian Heller, Tim Empkie, and Stewart Martin. I hope I haven’t left anyone out. They have been batting this around for a day or so. They have set up a couple grids that stack the advantages of moving the Fane tower downtown versus remaining at its currently proposed site. At a downtown site, the developer would benefit from a more generous height limit more easily relaxed, and a better fit within a denser urban context nearer to transportation and other amenities. The city would benefit from the above, plus the retention of the Fane tower’s initial 195 site for possible uses more amenable to high-tech opportunities and its parkside environment.

To save space I’ve summarized the two very interesting grids of benefits. The JDA bunch cites additional advantages accruing to the city, the state and the developer, but the biggest would be citizen and government support for the Fane rather than opposition. I’m sure that the discussion I’ve described just above will continue, teasing out even more benefits from a new location of the tower for both Providence’s citizens and Citizen Fane.

This blog was begun in 2009 as a feature of the Providence Journal, where I was on the editorial board and wrote a weekly column of architecture criticism for three decades. Architecture Here and There fights the style wars for classical architecture and against modern architecture, no holds barred. History Press asked me to write and in August 2017 published my first book, "Lost Providence." I am now writing my second book. My freelance writing on architecture and other topics addresses issues of design and culture locally and globally. I am a member of the board of the New England chapter of the Institute of Classical Architecture & Art, which bestowed an Arthur Ross Award on me in 2002. I work from Providence, R.I., where I live with my wife Victoria, my son Billy and our cat Gato. If you would like to employ my writing and editing to improve your work, please email me at my consultancy, dbrussat@gmail.com, or call 401.351.0457. Testimonial: "Your work is so wonderful - you now enter my mind and write what I would have written." - Nikos Salingaros, mathematician at the University of Texas, architectural theorist and author of many books.
View all posts by David Brussat →
This entry was posted in Architecture, Development and tagged BlueChip, Fane Tower, Financial District, I-195 Corridor, Jason Fane, Jewelry District Association, OneTen Westminster, Providence Preservation Society, Providence RI. Bookmark the permalink.