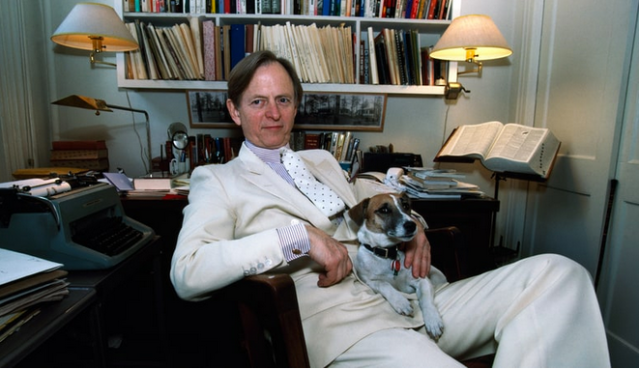 The possibility exists that someday architecture will shuck its cult status and return to its roots. If that day ever comes, the late writer Tom Wolfe will deserve much credit. His 1981 book From Bauhaus to Our House opened the eyes of many to the crazy tale behind the emperor’s new clothes. He was in the upper firmament of my own pantheon of heroes. May he rest in peace.

Readers, enjoy Wolfe’s Bauhaus preface below in its vivid entirety:

O BEAUTIFUL, for spacious skies, for amber waves of grain, has there ever been another place on earth where so many people of wealth and power have paid for and put up with so much architecture they detested as within thy blessed borders today?

I doubt it seriously. Every child goes to school in a building that looks like a duplicating-machine replacement-parts wholesale distribution warehouse.

[My own oft-repeated version is “cardboard-box factory.” Lame!]

Not even the school commissioners, who commissioned it and approved the plans, can figure out how it happened. The main thing is to try to avoid having to explain it to the parents.

Every new $900,000 summer house in the north woods of Michigan or on the shore of Long Island has so many pipe railings, ramps, hob-tread metal spiral stairways, sheets of industrial plate glass, banks of tungsten-halogen lamps, and white-cylindrical shapes, it looks like an insecticide refinery. I once saw the owners of such a place driven to the edge of sensory deprivation by the whiteness & lightness & leanness & cleanness & bareness & spareness of it all. They became desperate for an antidote, such as coziness & color. They tried to bury the obligatory white sofas under Thai-silk throw pillows of every rebellious, iridescent shade of magenta, pink, and tropical green imaginable. But the architect returned, as he always does, like the conscience of a Calvinist, and he lectured them and hectored them and chucked the shimmering little sweet things out.

Every great law firm in New York moves without a sputter of protest into a glass-box office building with concrete slab floors and seven-foot-ten-inch-high concrete slab ceilings and plasterboard walls and pygmy corridors – and then hires a decorator and gives him a budget of hundreds of thousands of dollars to turn these mean cubes and grids into a horizontal fantasy of a Restoration townhouse. I have seen the carpenters and cabinetmakers and search-and-acquire girls hauling in more cornices, covings, pilasters, carved moldings, and recessed domes, more linenfold paneling, more (fireless) fireplaces with festoons of fruit carved in mahogany on the mantels, more chandeliers, sconces, girandoles, chestnut leather sofas, and chiming clocks than Wren, Inigo Jones, the brothers Adam, Lord Burlington, and the Dilettanti, working in concert, could have dreamed of.

Without a peep they move in! – even though the glass box appalls them all.

These are not merely my impressions, I promise you. For detailed evidence one has only to go to the conferences, symposia, and jury panels where the architects gather today to discuss the state of the art. They profess to be appalled themselves. Without a blush they will tell you that modern architecture is exhausted, finished. They themselves joke about the glass boxes. They use the term with a snigger. Philip Johnson, who built himself a glass-box house in Connecticut in 1949, utters the phrase with an antiquarian’s amusement, the way someone else might talk about an old brass bedstead discovered in the attic.

In any event, the problem is on the way to being solved, we are assured. There are now new approaches, new movements, new isms: Post-Modernism, Late Modernism, Rationalism, participatory architecture, Neo-Corbu, and the Los Angeles Silvers. Which add up to what? To such things as building more glass boxes and covering them with mirrored plate glass so as to reflect the glass boxes next door and distort their boring straight lines into curves. …

[Wolfe’s book was written and published well before the architectural establishment had fully routed the insurgency of postmodernism. PoMo theorists had modernism dead to rights but then wimped out when it came to proof by design. Instead of reviving the traditions to which their critique invariably pointed, the postmodernists designed glass boxes with cartoonish “ironic” classical elements plopped on. Meanwhile, establishment modernists replied by dumping their own playbook in favor of a total abandonment of precedent – abjuring not only the styles of history but those of any and every contemporary rival, leaving fewer and fewer creative alternatives, flying higher and higher in ever-decreasing concentric circles until – to continue Wolfe’s famous line about Corbusier – their options “disappear up his own fundamental aperture.” Wolfe would have had a field day if he had followed up with an updated version of Bauhaus. Must read A Man in Full again to see whether his take on Atlanta’s glitz picks up on this.]

… I find the relation of the architect to the client in America today wonderfully eccentric, bordering on the perverse. In the past, those who commissioned and paid for palazzi, cathedrals, opera houses, libraries, universities, museums, ministries, pillared terraces, and winged villas didn’t hesitate to turn them into visions of their own glory. Napoleon wanted to turn Paris into Rome under the Caesars, only with louder music and more marble. And it was done. His architects gave him the Arc de Triomphe and the Madeleine. His nephew Napoleon III wanted to turn Paris into Rome with Versailles piled on top, and it was done. His architects gave him the Paris Opéra, an addition to the Louvre, and miles of new boulevards. Palmerston once threw out the results of a design competition for a new British Foreign Office building and told the leading Gothic Revival architect of the day, Gilbert Scott, to do it in the Classical style. And Scott did it, because Palmerston said do it.

In New York, Alice Gwynne Vanderbilt told George Browne Post to design her a French château at Fifth Avenue and Fifty-seventh Street, and he copied the Château de Blois for her down to the chasework on the brass lock rods on the casement windows. Not to be outdone, Alva Vanderbilt hired the most famous American architect of the day, Richard Morris Hunt, to design her a replica of the Petit Trianon as a summer house in Newport, and he did it, with relish. He was quite ready to satisfy that or any other fantasy of the Vanderbilts. “If they want a house with a chimney on the bottom,” he said, “I’ll give them one.” But after 1945 our plutocrats, bureaucrats, board chairmen, CEO’s, commissioners, and college presidents undergo an inexplicable change. They become diffident and reticent. All at once they are willing to accept that glass of ice water in the face, that bracing slap across the mouth, that reprimand for the fat on one’s bourgeois soul, known as modern architecture.

And why? They can’t tell you. They look up at the barefaced buildings they have bought, those great hulking structures they hate so thoroughly, and they can’t figure it out themselves. It makes their heads hurt.

Wolfe goes on to explain why. And his book became a bestseller, enchanting millions, and generating such hatred from the modernists as to curl anyone’s toenails, and to show how far under their skin he got. But by 1981 it seemed beyond impossible to turn back.

Or maybe not. Wolfe’s scathing look at American society – at modern architecture and every wrinkle of our collective folly – is at heart a book of optimism, written in the hope if not the expectation that foolishness will out and simple good sense will prevail. The problem of architecture may be the most easily solved major problem in the history of mankind. Society need only remove its blinders and flip a switch. If such an essentially effortless revolt happens, it will be fair to finger Tom Wolfe as the ultimate instigator.

This blog was begun in 2009 as a feature of the Providence Journal, where I was on the editorial board and wrote a weekly column of architecture criticism for three decades. Architecture Here and There fights the style wars for classical architecture and against modern architecture, no holds barred. History Press asked me to write and in August 2017 published my first book, "Lost Providence." I am now writing my second book. My freelance writing on architecture and other topics addresses issues of design and culture locally and globally. I am a member of the board of the New England chapter of the Institute of Classical Architecture & Art, which bestowed an Arthur Ross Award on me in 2002. I work from Providence, R.I., where I live with my wife Victoria, my son Billy and our cat Gato. If you would like to employ my writing and editing to improve your work, please email me at my consultancy, dbrussat@gmail.com, or call 401.351.0457. Testimonial: "Your work is so wonderful - you now enter my mind and write what I would have written." - Nikos Salingaros, mathematician at the University of Texas, architectural theorist and author of many books.
View all posts by David Brussat →
This entry was posted in Architecture, Books and Culture and tagged From Bauhaus to Our House, Tom Wolfe. Bookmark the permalink.

9 Responses to Architecture’s debt to Wolfe