“Why Copies of 15 Central Park West Are Taking Over Manhattan,” by James Tarmy in Bloomberg Businessweek, exaggerates the phenomenon of a “takeover” and doesn’t even answer his own question.

The answer is obvious: 15 Central Park West, designed by Robert Stern Architects and completed in 2008, has made money hand over fist for its developer, the Zeckendorfs (for whom my father once worked). Other developers naturally are eager to copy a successful business model.

In 2007, Sanford Weill, then chairman of Citigroup Inc., set a city record by paying more than $6,400 a square foot for his $43.7 million penthouse. Celebrities, including Alex Rodriguez, Robert De Niro, and Sting, filled its halls. In the initial frenzy, apartments were being flipped just months after they were bought. During the financial crisis, when the rest of the real estate market floundered, the building became its own overheated market. In 2010, Min Kao, the executive chairman of Garmin Corp., paid almost $10,000 per square foot via an LLC for his 41st-floor condo.

But why has 15 CPW made so much money? Tarmy pretends not to know, but I think he knows perfectly well. 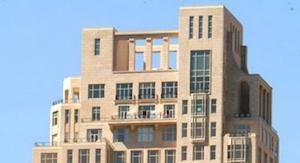 It is clearly because very rich people have become tired of glass and steel modernism, and they have enough financial clout to demand that developers cater to their taste. They would like the traditional look and quality that was typical before World War II, at least for the buildings they inhabit. Stern provides that.

The fact that rich people like to live amid beauty is less extraordinary than the fact (if we can trust Tarmy’s research) that only Stern’s firm is being hired to design beautiful traditional residential buildings in Manhattan. 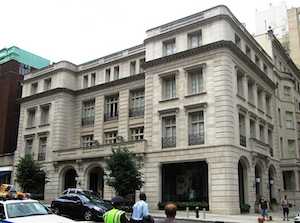 Remarkable – if true. But maybe not so remarkable if there is an industry prejudice against traditional buildings so strong that it can withstand such a powerful gust of market forces on the demand side. Remember when the powers that be in New York architecture, even preservationists, came down like a ton of bricks on Ralph Lauren for proposing a classical new shop on Madison Avenue? (He built it anyway.) Tarmy’s article, in a Bloomberg publication, suggests that the design establishment’s prejudice against beauty is indeed that strong. 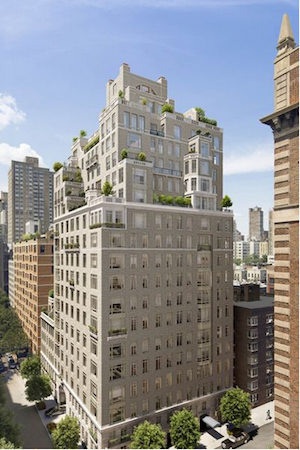 Tarmy refers to the “faux pre-war style” of 15 CPW. Faux? Why faux? Its style is merely a blend of the Neoclassical and Art Deco. It is not a copy but a genuinely creative mixture of styles that characterized Manhattan apartment buildings during the first half of the 20th century. The author’s derogatory phrase is followed by other smears in his description of how Stern’s “copies” of 15 CPW are “taking over” Manhattan, as if they are some sort of alien space invader, and indeed they do a great job of putting the modernist nose out of joint. Tarmy describes the 15 CPW clones: all five of them.

Five? Wow, what a take-over.

Why the slurs and the overheated rhetoric? Probably because Tarmy wants to make sure that readers – mostly in the building design and development industries – understand that Tarmy (or, rather, Bloomberg) does not approve of Stern and his old-fangled apartment buildings. At last, toward the end of his article, Tarmy lets the cat out of the bag:

Manhattan isn’t even close to saturated with Stern condos. Unlike buildings by other starchitects such as Frank Gehry or Jean Nouvel, which are often meant to stand out with striking designs, 15 CPW and its ilk are meant to blend in. And that’s why Stern is building more of them than his peers. “The genre of [starchitec- ture] is defined by creating something unique,” he says. “The multiple versions of 15 Central Park West are a conservative version of something new.”

A little bit of honesty seems to creep out here, revealing that Tarmy’s “takeover” was an exaggeration and that maybe Stern’s “peers” are, in fact, building versions of “15 CPW and its ilk.” And its ilk? He even reluctantly admits that they aren’t just copycats. Clearly something irks Tarmy about Stern. Doubtless it is Stern’s refusal to play by the rules of establishment modernism. Doesn’t Stern realize that modern architecture is the brand of the one percent? Tarmy is sending Bob Stern to re-education camp.

My guess: Stern will ignore him and keep on keeping on with his great work. This blog was begun in 2009 as a feature of the Providence Journal, where I was on the editorial board and wrote a weekly column of architecture criticism for three decades. Architecture Here and There fights the style wars for classical architecture and against modern architecture, no holds barred. History Press asked me to write and in August 2017 published my first book, "Lost Providence." I am now writing my second book. My freelance writing on architecture and other topics addresses issues of design and culture locally and globally. I am a member of the board of the New England chapter of the Institute of Classical Architecture & Art, which bestowed an Arthur Ross Award on me in 2002. I work from Providence, R.I., where I live with my wife Victoria, my son Billy and our cat Gato. If you would like to employ my writing and editing to improve your work, please email me at my consultancy, dbrussat@gmail.com, or call 401.351.0457. Testimonial: "Your work is so wonderful - you now enter my mind and write what I would have written." - Nikos Salingaros, mathematician at the University of Texas, architectural theorist and author of many books.
View all posts by David Brussat →
This entry was posted in Architecture, Development and tagged 15 Central Park West, Bloomberg Businessweek, James Tarmy, New York NY, Robert A.M. Stern, Robert Stern Architects, Zeckendorf. Bookmark the permalink.

5 Responses to Why 15 CPW makes moola