My Jane’s Walk this Saturday

My fourth Jane’s Walk tour of the waterfront along the Providence River takes place at 4 p.m. this Saturday, May 5. We will meet at the Crawford Street Bridge near Hemenways in the Rubik’s Cube and stroll north, heading west around the curve of the Woonasquatucket River to Waterplace Park.

Visit Doors Open RI to learn of other Jane’s Walks this Friday-Sunday.

Since our tour is about waterfronts, read what Jane Jacobs wrote of waterfronts in Fortune magazine in April 1958, three years before her pathbreaking The Death and Life of Great American Cities was published in 1961.

Waterfronts are a great asset, but few cities are doing anything with them. Of the dozens of our cities that have riverfronts downtown, only one, San Antonio, has made of this feature a unique amenity. Go to New Orleans and you can find that the only way to discover the Mississippi is through an uninviting, enclosed runway leading to a ferry. The view is worth the trip, yet there is not a restaurant on the river frontage, nor any rooftop restaurants from which to view the steamers, no place from which to see the bananas unloaded or watch the drilling rigs and dredges operating. New Orleans found a character in the charming past of the Vieux Carré, but the character of the past is not enough for any city, even New Orleans.

Today, many cities have built waterfronts, including New Orleans, and an overwhelming majority of them are junk. The Waterfront Center, a nonprofit advocate of development on civic embankments, has a pair of picture books and a set of booklets recognizing three decades of awards in the Waterfront Center’s annual competition. The center’s illustrations record the generally modernist and experimental design conceits embraced by almost all of the new waterfronts around the world since 1981, when TWC was founded. These waterfronts demonstrate how sadly unusual is the level of design beauty embodied by the Providence waterfront.

Our waterfront’s design uses traditional architecture as a tool to turn infrastructure into beauty. The design work (see below) was performed by the late William Warner and his firm. The new I-195 bridge taking the relocated highway over the Providence River should be named for Bill Warner, who understood that our bridges, parks and river walks should be as traditional in appearance as the city itself. Providence is lucky in its new waterfront because Providence is lucky in its architectural legacy – which was not destroyed by urban renewal as in so many other cities.

Consider Jacobs’ curious last sentence in the passage above, in which she declares that “the character of the past is not enough for any city.” That is no doubt true of cities that have destroyed their own historic characters, as almost happened here in 1959 and again in 1960. By then, the destruction wrought across civic America by urban renewal and modern architecture was well under way. Providence dodged that bullet.

So on Saturday at 4, come see why Providence and its residents are so lucky, and why its visitors so astonished, by the city’s waterfront. Gape in wonder at plans by city officials to try, yet again, to destroy Providence even after all we supposedly have learned over the past half century. What is most surprising? The city’s beauty, or the desire of the city fathers to kill the beauty? 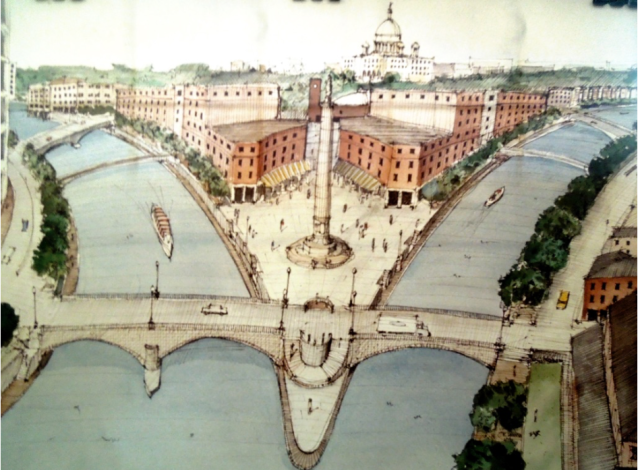 This blog was begun in 2009 as a feature of the Providence Journal, where I was on the editorial board and wrote a weekly column of architecture criticism for three decades. Architecture Here and There fights the style wars for classical architecture and against modern architecture, no holds barred. History Press asked me to write and in August 2017 published my first book, "Lost Providence." I am now writing my second book. My freelance writing on architecture and other topics addresses issues of design and culture locally and globally. I am a member of the board of the New England chapter of the Institute of Classical Architecture & Art, which bestowed an Arthur Ross Award on me in 2002. I work from Providence, R.I., where I live with my wife Victoria, my son Billy and our cat Gato. If you would like to employ my writing and editing to improve your work, please email me at my consultancy, dbrussat@gmail.com, or call 401.351.0457. Testimonial: "Your work is so wonderful - you now enter my mind and write what I would have written." - Nikos Salingaros, mathematician at the University of Texas, architectural theorist and author of many books.
View all posts by David Brussat →
This entry was posted in Architecture, Urbanism and planning and tagged Jane Jacobs, Jane's Walk, Providence RI, The Waterfront Center, William D. Warner. Bookmark the permalink.

4 Responses to My Jane’s Walk this Saturday