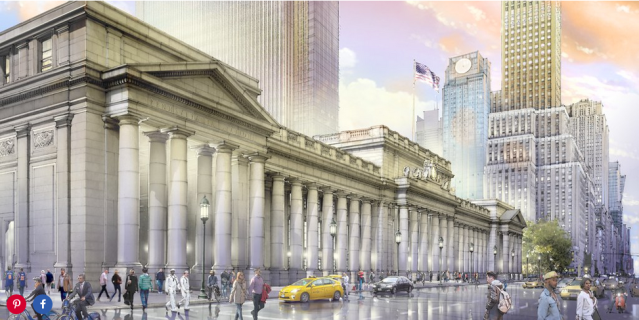 The National Civic Art Society, in Washington, has named the critic Catesby Leigh, one of its co-founders and early board chairmen, as its research fellow for 2018-2019. This salutary honor will enable Leigh to continue studying the phenomenon of monuments, and also enable his involvement in the latest project at NCAS (of which I am a member). I convey my congratulations!

One monument America lost in 1962 was Pennsylvania Station, designed by Charles Follen McKim of the firm McKim, Mead & White, and completed in 1910. It was razed in an act of cultural barbarism described at the time by the late critic Vincent Scully’s lament that “one entered the city like a god,” but “now one scuttles in like a rat.”

Of course train stations are supremely utilitarian structures but Penn Station transcended its utility, emerging as nobility. That’s no longer allowed these days, but the NCAS has embraced a proposal by Brooklyn architect Richard Cameron to rebuild Penn Station as originally designed. The project would naturally include changes to suit the needs of today, as if anyone has to be assured of that. And yes, some do require, or pretend to require, such assurances. They are called modernists.

Leigh wrote a memorable, indeed, a beautiful essay on the option to rebuild, “Penn Station, Reborn?,” published at delicious length in the Summer 2016 edition of the Manhattan Institute’s quarterly, City Journal. Leigh deftly parses the interlocking difficulties of the plan and how it can solve the dire transportation infrastructure problems facing the New York region today. He has done so in such a manner as to make the seemingly impossible sound perfectly logical – and even affordable. Leigh writes:

[T]he old Penn Station was not architecture “of its time” but architecture for all time. Cameron puts the cost of rebuilding it at $2.5 billion. Demolition of 2 Penn Plaza as well as [Madison Square] Garden could move the price tag up to $3 billion. But thanks to Hudson Yards and the High Line, property values in this neighborhood have risen dramatically. Even under existing zoning, the station’s reconstruction would yield millions of square feet of transferable air rights that would make a big dent in that price tag.

More than affordable, after finishing Leigh’s essay, readers come away with an almost spiritual assurance that rebuilding Pennsylvania Station can help revive the nation, pulling us together again – as a train station ought to do.

The result would be a stupendous public resort like Milan’s Galleria Vittorio Emanuele II, with a major transportation component built in.

“One entered the city like a god.” Yes, and we can do so again. 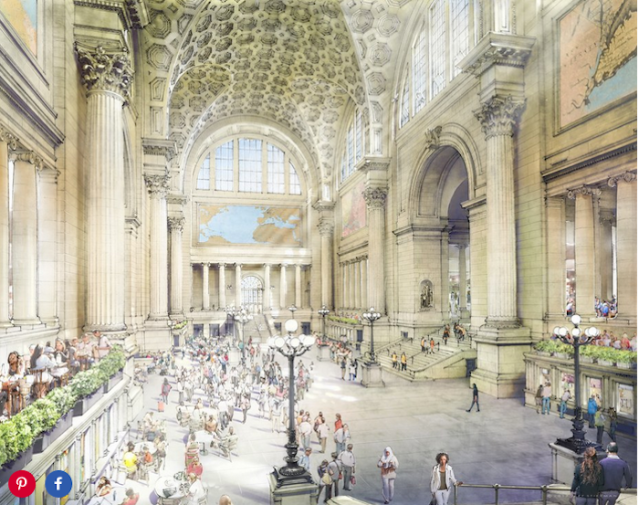 This blog was begun in 2009 as a feature of the Providence Journal, where I was on the editorial board and wrote a weekly column of architecture criticism for three decades. Architecture Here and There fights the style wars for classical architecture and against modern architecture, no holds barred. History Press asked me to write and in August 2017 published my first book, "Lost Providence." I am now writing my second book. My freelance writing on architecture and other topics addresses issues of design and culture locally and globally. I am a member of the board of the New England chapter of the Institute of Classical Architecture & Art, which bestowed an Arthur Ross Award on me in 2002. I work from Providence, R.I., where I live with my wife Victoria, my son Billy and our cat Gato. If you would like to employ my writing and editing to improve your work, please email me at my consultancy, dbrussat@gmail.com, or call 401.351.0457. Testimonial: "Your work is so wonderful - you now enter my mind and write what I would have written." - Nikos Salingaros, mathematician at the University of Texas, architectural theorist and author of many books.
View all posts by David Brussat →
This entry was posted in Architecture and tagged Catesby Leigh, City Journal, Manhattan Institute, National Civic Art Society, Penn Station, Rebuild Penn Station, Richard Cameron. Bookmark the permalink.