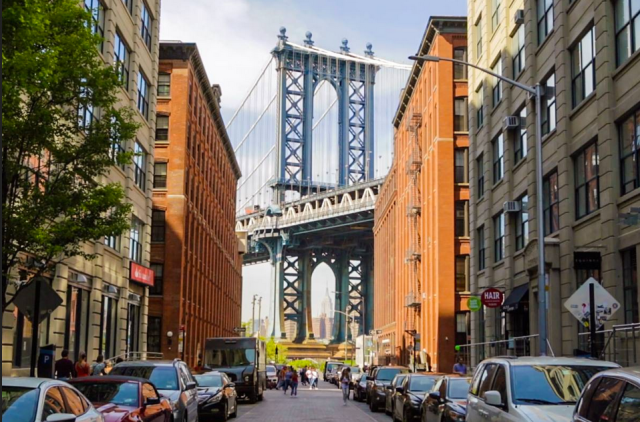 Manhattan Bridge as seen from one of Brooklyn’s city streets. (NYCgo.com)

The latest Traditional Building Conference, next week in Brooklyn, will feature a host of seminars that together emphasize how major traditional projects can influence the evolution of traditional building techniques.

The Dec. 5-6 symposium, spanning Tuesday and Wednesday, at Grand Prospect Hall (263 Prospect Ave.) and other venues, will assemble various themes that feed into the close relationship between what is being built and how it is being built. The opening lecture will be by Francis Morrone, the noted architectural historian with his finger on the interplay between historical preservation and development in booming Brooklyn.

To the extent that development projects feature restoration of old buildings and new construction that fits into Brooklyn’s range of historical settings, the tools, materials and practices used in construction will differ to some degree from those used on modernist projects. The evolution of each factor proceeds along largely separate tracks, just as evolution in traditional and modernist design proceeds gradually or lurchingly, as the case may be.

In this regard, the most intriguing seminar could be about the proposal by Richard Cameron, of Atelier & Co. in Brooklyn, to rebuild Pennsylvania Station, in Manhattan, as originally conceived by Charles Follen McKim of the Gilded Age firm of McKim Mead & White. The proposal got a major boost from the journals Traditional Building and Period Homes, whose editor emeritus, Clem Labine, will join Cameron on the panel.

Penn Station opened in 1910 and was demolished in 1963. Its foundation and trackage remain intact, and elements of its granite structure and decoration may still be where they were dumped in New Jersey’s Meadowlands. Clearly, however, so much has changed since it was built that its cost requires total reconceptualization. To an extent, whether the proposal moves forward depends on the degree to which supporters and major donors (private or public) can be persuaded that new techniques and new methods of practicing old techniques can play a major role in producing savings.

The latest thinking on this subject will form a part of the Penn Station presentation, as the seminar’s first “learning objective” suggests:

Explain the original building craft work lost when Penn Station was destroyed and how rebuilding a new building would use both traditional craft and modern design and construction technologies.

A major project like rebuilding old Penn Station would also affect the market for traditional products and services, leading not only to the expansion of firms and the increase in competition among them, but to speeding market entry for new products and services that would be needed for such a grand endeavor, especially to reduce its cost.

Other panels of the symposium might also be framed to elicit useful information about the influence of major traditional projects on the construction methods at all levels of traditional design and construction. Here is a list, in order, of the other panels:

This blog was begun in 2009 as a feature of the Providence Journal, where I was on the editorial board and wrote a weekly column of architecture criticism for three decades. Architecture Here and There fights the style wars for classical architecture and against modern architecture, no holds barred. History Press asked me to write and in August 2017 published my first book, "Lost Providence." I am now writing my second book. My freelance writing on architecture and other topics addresses issues of design and culture locally and globally. I am a member of the board of the New England chapter of the Institute of Classical Architecture & Art, which bestowed an Arthur Ross Award on me in 2002. I work from Providence, R.I., where I live with my wife Victoria, my son Billy and our cat Gato. If you would like to employ my writing and editing to improve your work, please email me at my consultancy, dbrussat@gmail.com, or call 401.351.0457. Testimonial: "Your work is so wonderful - you now enter my mind and write what I would have written." - Nikos Salingaros, mathematician at the University of Texas, architectural theorist and author of many books.
View all posts by David Brussat →
This entry was posted in Architecture, Preservation and tagged Atelier & Co., Brooklyn NY, Clem Labine, Grand Prospect Hall, Penn Station, RAMSA, Traditional Building, Traditional Building Conference. Bookmark the permalink.

3 Responses to TBC symposium in Brooklyn