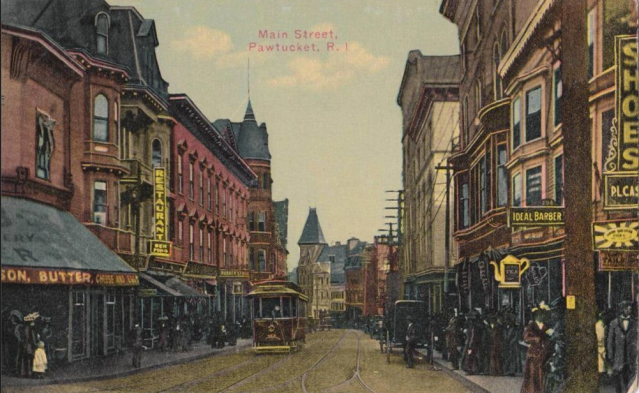 Postcard of Main Street, Pawtucket, in the 1890s. (pinterest.co.uk)

Doubts are increasing about whether new development around a proposed PawSox stadium can support its costs amid downtown Pawtucket’s longstanding failure to thrive.

Today’s Providence Sunday Journal ran a package of stories highlighting those doubts, but the issue was placed front and center on the Journal’s oped page on Thursday by Jim Raftus. In “Pawtucket’s revival requires more than ballpark,” the retired ad exec, who grew up in Pawtucket, describes a recent walk he took, and the deteriorated streets he found, along the path fans would take between the to-be-renovated old train station and the new stadium. He then notes the 50,000 square feet of spinoff in the stadium’s direct vicinity (see image below) and on Division Street. He writes:

This sounds fine, but Division Street is not downtown and the new buildings planned by the PawSox are in close proximity to the park. This new construction would have minimal effect on the deteriorating core of Main Street. When Apex moved into this location, while it enjoyed a decades-long success, it did not bring vitality to the struggling business sector just down the street. When discharged from the Army in 1971, I worked at Apex. I know the minimal effect it had.

So, why are the team and the city entirely focused on new construction rather than revitalizing what exists? Have the city officials given up on this area? Why not make Main Street and downtown the gateway to the ballpark?

The postcard view of Main Street atop this post suggests how delightful it was in the 1890s, a situation that survived into the 1950s. Then Pawtucket’s leaders drank the same Kool Aid gulped down by their Providence colleagues after the latter proposed, in 1960, the Downtown Providence 1970 plan with a “destroy the village in order to save it” redevelopment strategy. Both cities proposed new modernist buildings, pedestrian malls and faux modernist façades for whatever beautiful buildings they were not planning to demolish on Main or Westminster streets.

The first photo below shows how attractive the new modernist buildings and faux façades looked during construction. Main Street looks much the same today, in spite of a few attractive but lonely buildings that remain.

These plans were developed at a time when city residents and businesses were in flight to the suburbs. In my opinion, well-publicized plans designed to fight this trend only exacerbated it. Images in local papers and on the evening news showed citizens how civic leaders were planning to uglify the downtowns of both cities.

Of course, planners did not see it that way, and many civic leaders and design professionals still do not see it that way. But most members of the general public have grown up day by day since near birth assessing architecture and urbanism. They have developed a very sophisticated, if intuitive, ability to assess places, both in terms of appearance and utility. So, many citizens read about and heard about these plans to fight flight and came to conclusions opposite those reached by the experts. The public feared that the plans were going to make downtowns worse, not better. So those plans contributed to the suburban exodus rather than helping to slow it down or reverse it.

Again, although still a long way to go, downtown Providence has discovered the key to revitalization lies in reasserting its historical character. When the PawSox considered moving to Providence in 2015, they used nice images of a traditional stadium in their publicity effort. Citizens turned thumbs down on the stadium deal for financial reasons, but I supported the concept (not the deal) because I hoped a traditional stadium would lead to more traditional buildings’ being proposed in the 195 corridor. Now the PawSox are using images of a stadium and its surroundings that fly in the face of Pawtucket’s historical character. I’ll bet that’s one reason why so many Rhode Islanders are inclined to find the latest PawSox stadium deal underwhelming.

So I agree with Jim Raftus. Don’t surround the new stadium with ugly new buildings. Instead, spend the money revitalizing Main Street – and build a more attractive stadium. This is not rocket science. Beauty is destiny, and planners who do not recognize that will shoot their cities in the foot.

Pawtucket, are you next?

(Some interesting images from a 2007 exhibit on plans of the last half century or so can be viewed on the website “Planning Pawtucket.”)

In the 1960s, Pawtucket renovated Main Street as a pedestrian mall. (thurowsmall.com)

Illustration of how Main Street would look after renovation. (thurowsmall.com)

This image of proposed PawSox Stadium is now seen more often than a nicer image. (PawSox)

This blog was begun in 2009 as a feature of the Providence Journal, where I was on the editorial board and wrote a weekly column of architecture criticism for three decades. Architecture Here and There fights the style wars for classical architecture and against modern architecture, no holds barred. History Press asked me to write and in August 2017 published my first book, "Lost Providence." I am now writing my second book. My freelance writing on architecture and other topics addresses issues of design and culture locally and globally. I am a member of the board of the New England chapter of the Institute of Classical Architecture & Art, which bestowed an Arthur Ross Award on me in 2002. I work from Providence, R.I., where I live with my wife Victoria, my son Billy and our cat Gato. If you would like to employ my writing and editing to improve your work, please email me at my consultancy, dbrussat@gmail.com, or call 401.351.0457. Testimonial: "Your work is so wonderful - you now enter my mind and write what I would have written." - Nikos Salingaros, mathematician at the University of Texas, architectural theorist and author of many books.
View all posts by David Brussat →
This entry was posted in Architecture, Development and tagged Downtown Providence 1970, Jim Raftus, PawSox, Pawtucket Red Sox, Pawtucket RI, Planning Pawtucket, Providence Journal, Providence RI. Bookmark the permalink.