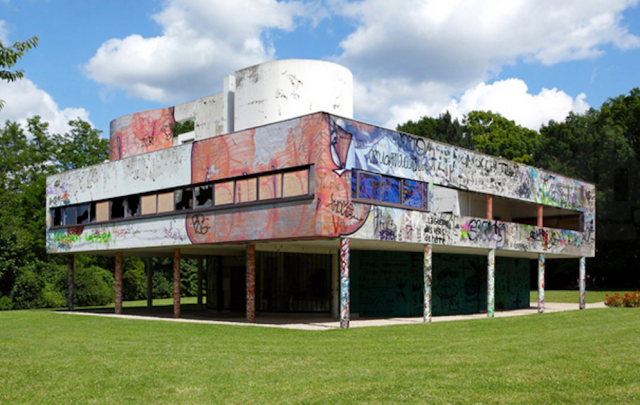 Nir Buras, whose Classic Planning blog I’ve just put on “Blogs I Follow,” and who is writing a major study on classical planning that has taken him around the world, reacted with a deft panache to my recent post on Le Corbusier’s 1912 painting called “Two Lesbians.” NB, as he styles himself, penned a fling at Corbu’s Villa Savoye, treating it as a masterfully designed party house. He gave me permission to run it as a post. Read it here: “All for Purism, Purism for All! Let’s all be blind in one eye, just like Corbu!” Here is a passage:

The architecture is of a highly elaborated multi-space, where people can strike the full gamut of flirting poses, i.e., lean against pilotis, lean over railings, lean against walls, sit on railings, rest their butts on windowsills, on the ramp, and on stairs.

Purism, by the way, is the aesthetic philosophy developed in 1918 by Corbusier and his friend Amédée Ozenfant, a style that he later used to decorate another friend’s seaside villa, which his supporters believe he also designed. A while back I posted, in “Shocking! Le Corbusier nude!,” on Corbu’s tagging his friend Eileen Gray’s villa with graffiti (well, he thought they were paintings) without her permission. Yes, he was a jackass of the first water, as demonstrated in Malcolm Millais’s new book, Le Corbusier, the Dishonest Architect, which I will be reviewing soon.

Not too long ago I found the above photo of his Villa Savoye with graffiti photoshopped by artist Xavier Delory onto the white walls of its exterior. In my lectures about my book Lost Providence, I have not been able to resist popping from a slide of the white building to a slide of the building tagged, suggesting that the graffiti represents the Villa Savoye “wearing its heart on its sleeve,” revealing the soul of its designer.

But maybe we’ve all been taking Corbu just a bit too seriously. Maybe he’s just a guy who likes to [fill in the blank] with the fair sex, and designs houses to facilitate whatever tendencies toward that end may exist in the souls of his clients. On the other hand, there might be many ugly #MeToo’s lurking between the lines of his blueprints. 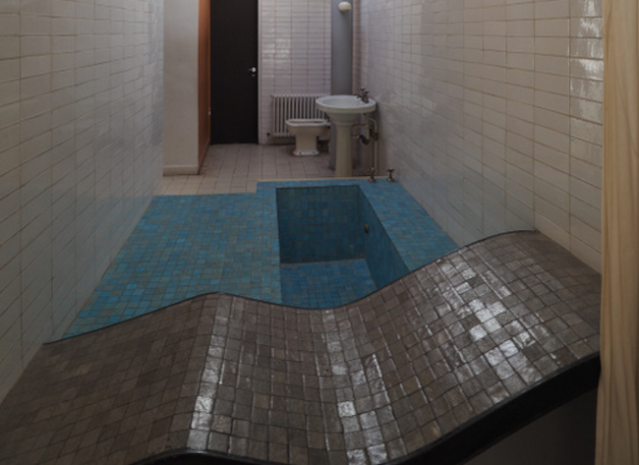 Historians wonder what that curvy shelf at Villa Savoye was really for. (Classic Planning)

This blog was begun in 2009 as a feature of the Providence Journal, where I was on the editorial board and wrote a weekly column of architecture criticism for three decades. Architecture Here and There fights the style wars for classical architecture and against modern architecture, no holds barred. History Press asked me to write and in August 2017 published my first book, "Lost Providence." I am now writing my second book. My freelance writing on architecture and other topics addresses issues of design and culture locally and globally. I am a member of the board of the New England chapter of the Institute of Classical Architecture & Art, which bestowed an Arthur Ross Award on me in 2002. I work from Providence, R.I., where I live with my wife Victoria, my son Billy and our cat Gato. If you would like to employ my writing and editing to improve your work, please email me at my consultancy, dbrussat@gmail.com, or call 401.351.0457. Testimonial: "Your work is so wonderful - you now enter my mind and write what I would have written." - Nikos Salingaros, mathematician at the University of Texas, architectural theorist and author of many books.
View all posts by David Brussat →
This entry was posted in Architecture, Uncategorized and tagged #MeToo, Classic Planning, Eileen Gray, Graffiti, Le Corbusier, Le Corbusier: The Dishonest Architect, Nir Buras, Villa Savoye, Xavier Delory. Bookmark the permalink.