More on R.I. and Amazon 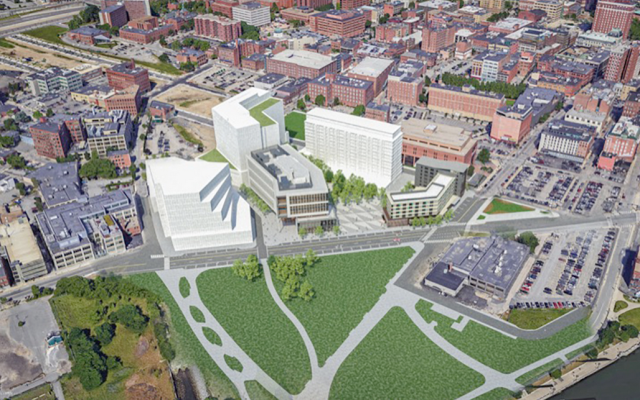 Sketch of part of I-195 corridor that could host new Amazon headquarters. (Greater City Providence)

In my Friday post “How R.I. can get Amazon” I pretty much asserted that beauty could tip the scales for Rhode Island and its capital Providence. That seems highly unlikely. How many corporate CEOs decide such things (or anything) on the basis of beauty?

Actually, though, if you look at Amazon’s request for proposals, it does come pretty close. It says it prefers “communities that think big and creatively when considering locations and real-estate options.” That Providence should submit a proposal based largely on its beauty demonstrates its creativity. And Providence can show that it thinks big by pointing to the city’s daylighted rivers, lined with lovely arched bridges, parks and walking paths. A state that piggybacked beautification on the back of a federal transportation project, almost entirely on the federal dime, is not a state that can be sniffed at by Amazon, a company that constantly seeks the main chance. For that matter, the primary site for Amazon to consider is on land freed up by moving an interstate highway. Although its citizens are a cynical bunch that would hardly credit the idea, thinking big is one thing Rhode Island does well.

Needless to say, Amazon would shoulder the chilly Wexford proposal, above, out of the picture and plan a headquarters in keeping with its setting in the Jewelry District. Contextual design would be Providence’s one requirement for doing a deal with Amazon.

At a population of 1.056 million, the city-state of Rhode Island just qualifies under the Amazon population-size preference (that’s the word specified, not “requirement”). More dicey is our reputation for business friendliness; the state is unfriendly, the city is unfriendlier. The problem might be addressed through its generous subsidies. It is not very smart at doling out the money, which could represent an opportunity for a company that lusts after the main chance.

Well-educated and creative people form much of Providence’s population – it ranks No. 3 among cities in surveys of creatives in the population. That surely grows if the proximity of Boston is taken into account. Amazon seeks a city whose culture and quality of life live up to what Amazon denizens have become accustomed to in Seattle. Providence would surely fit that lifestyle, and more – ditto its university mix – especially, again, with Boston and (let’s now add) New York thrown in as supporting actors.

As for where in Providence, the I-195 corridor would be perfect, already prepped for development and with utilities already built in. Furthermore, the footprint would be expandable adjacent to the collective parcels of the corridor, with further expansion on infill sites very close by in downtown and Capital Center (along that daylighted set of rivers).

A reader points out that Amazon wants to avoid coastal areas that might suffer from rising ocean levels over the years. I could not find that in the RFP itself, but Providence, showing foresight and boldness, installed a hurricane barrier at its top-of-the-bay location in the 1960s.

Another reader chided me for thumbing my nose at Seattle, based on the view of that city from Amazon’s front door. My intent was not to cock a snook at Seattle but at that sort of urbanism – lots of glass boxes in a sea of pavement – wherever it may be, including the current I-195 plan. My regrets to any Seattlers who thought I was dissing their city as a whole.

I had intended to address the whys and wherefors of the beauty part of this potential Providence proposal to Amazon, but the more I looked at the Amazon RFP, the more it seemed, despite my skepticism, that Providence aligns pretty well with it, and could in fact be a player even without roping in its extraordinary beauty. So I will discuss the beauty part in another blog post very soon. Needless to say, if our city and state officials can also be made to understand the merits of beauty, then Providence could fare very well in any joust with fellow cities for the new Amazon headquarters.

This blog was begun in 2009 as a feature of the Providence Journal, where I was on the editorial board and wrote a weekly column of architecture criticism for three decades. Architecture Here and There fights the style wars for classical architecture and against modern architecture, no holds barred. History Press asked me to write and in August 2017 published my first book, "Lost Providence." I am now writing my second book. My freelance writing on architecture and other topics addresses issues of design and culture locally and globally. I am a member of the board of the New England chapter of the Institute of Classical Architecture & Art, which bestowed an Arthur Ross Award on me in 2002. I work from Providence, R.I., where I live with my wife Victoria, my son Billy and our cat Gato. If you would like to employ my writing and editing to improve your work, please email me at my consultancy, dbrussat@gmail.com, or call 401.351.0457. Testimonial: "Your work is so wonderful - you now enter my mind and write what I would have written." - Nikos Salingaros, mathematician at the University of Texas, architectural theorist and author of many books.
View all posts by David Brussat →
This entry was posted in Architecture, Development, Providence and tagged Amazon, Amazon HQ2 RFP, Amazon Second Headquarters, Providence RI, Rhode Island, Seattle. Bookmark the permalink.

7 Responses to More on R.I. and Amazon