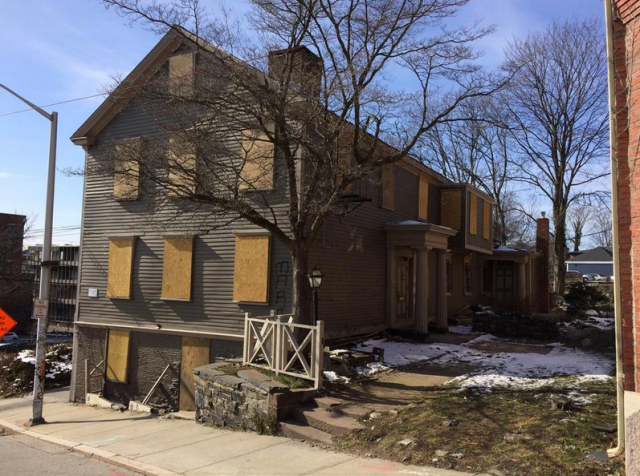 Is the Welcome Arnold House (circa 1785), on Planet Street in Fox Point, doomed to demolition by neglect? That’s the question posed by Catherine Zipf’s architecture column in today’s Providence Journal. She wonders whether its owner, Walter Bronhard, intends to let it deteriorate until it can barely stand. He has already applied to tear it down.

In “Will historic house face demolition?,” Zipf describes the history of the house and its current predicament, and explains how saving colonials in Providence has become old hat, almost a done deal as soon the plight of an old colonial house becomes known. “No one argues over saving 18th century buildings,” she writes. “We just do it.”

Good! But what about the Welcome Arnold House? Bronhard, who has not owned the house for as long as it has been deteriorating, “seeks permission from the Historic District Commission to demolish the building and recon- struct a copy,” she writes, adding: “Great idea, right? Won’t a replacement make everyone happy? Unfortunately, no.”

She correctly suggests that a replacement, even if well done, does not preserve the qualities we value in a genuine historical building. A replace- ment, or restoration, would be acceptable under the circumstances, indeed admirable, if it had burned down, or if it were in fact so deteriorated that it had to be demolished for reasons of safety. But if it gets that way through malign neglect, then it is not acceptable – though what can be done about it is hard to know. Until it actually falls down it can in theory be fixed, however expensive that may prove. The city can continue to deny a demo permit until Bronhard throws up his hands and decides either to fix the building or sell it to someone who will.

That’s my hunch, at least. I don’t know exactly what Bronhard’s rights are as a house owner – or his duties under the law. Bronhard also owns the nearby Gen. Ambrose E. Burnside House (1866) and is apparently on a house-buying spree on the East Side of Providence, so preservationists should be pressing the city to clarify these legal issues.

In reading Zipf’s thoughts about the Welcome Arnold House, I was with her (I am not always so agreeable!) until she wrote: “We don’t build buildings as we did in the Colonial period.” Obviously we cannot do so in precisely the same way, using the same tools and techniques. But we can do so to a degree that produces a contemporary house that satisfies the widespread yearning for new buildings designed in the manner of old buildings. We can and we should. We must not accept the false idea that we cannot do so. Modernists commonly assert that we cannot – but the fact is that we can, and they simply will not do so. It is a matter of choice, not fate.

And then, confusingly, she adds: “Current zoning codes will force the building’s form into a modern shape.” Well, certainly some building and safety codes mandate, say, wider steps and halls than might have been used in a historic house. But that need not prevent its design from taking a his- toric form. And, to be sure, any house built in modern times must perforce assume a “modern” shape. Any thing built today is modern in that broad sense of the word and cannot be otherwise. If that is all she means, her assertion is just a bland statement of the obvious.

But if she used the word “modern” to avoid the word “modernist,” with all its baggage, then she is not only mistaken – zoning codes force no such thing – but culpable of using rhetorical sleight of hand to mislead her readers. Per- haps she is trying to hint that we might as well accept modernist buildings because that’s all we are going to get.

For a writer, that is just as wrong as it is for the owner of a historic building to seek its demolition through a stratagem of neglect. So I will assume that Zipf was just stating the obvious – certainly no crime in that! – and that I am being hypersensitive. Get the man an Occam’s razor!

(Occam’s razor is shorthand for the theory that the simplest explanation for a phenomenon is more likely to be true than a more complex explanation. Conspiracy theorists are among those who often fail to use Occam’s razor.)

This blog was begun in 2009 as a feature of the Providence Journal, where I was on the editorial board and wrote a weekly column of architecture criticism for three decades. Architecture Here and There fights the style wars for classical architecture and against modern architecture, no holds barred. History Press asked me to write and in August 2017 published my first book, "Lost Providence." I am now writing my second book. My freelance writing on architecture and other topics addresses issues of design and culture locally and globally. I am a member of the board of the New England chapter of the Institute of Classical Architecture & Art, which bestowed an Arthur Ross Award on me in 2002. I work from Providence, R.I., where I live with my wife Victoria, my son Billy and our cat Gato. If you would like to employ my writing and editing to improve your work, please email me at my consultancy, dbrussat@gmail.com, or call 401.351.0457. Testimonial: "Your work is so wonderful - you now enter my mind and write what I would have written." - Nikos Salingaros, mathematician at the University of Texas, architectural theorist and author of many books.
View all posts by David Brussat →
This entry was posted in Architecture, Preservation, Providence and tagged 21 Planet St., Catherine Zipf, Preservation, Providence Journal, Providence RI, Walter Bronhard, Welcome Arnold House, Zoning. Bookmark the permalink.